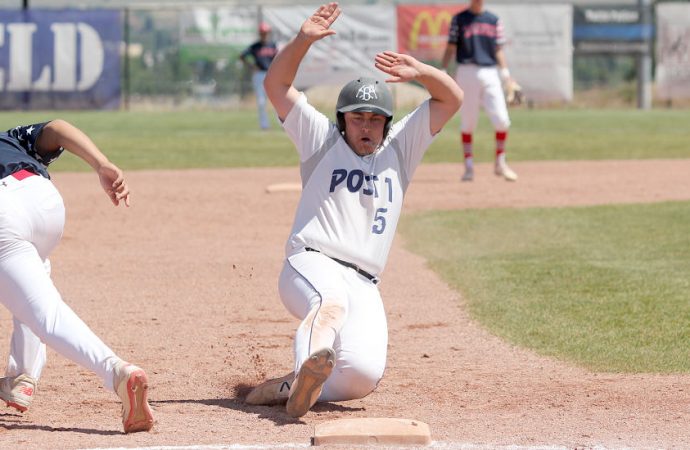 The unofficial motto of the 2020 Butte Miners is “Do better.”

It started when coach Jeff LeProwse yelled that to an umpire earlier this season, and players have seemed to adopt it.

Even if they are probably mostly mocking their coach by yelling it, the motto seems fitting for the best baseball team the Mining City has produced in quite some time.

Butte closed the regular season Saturday by drubbing the Livingston Braves twice in a Southern A doubleheader on Miners Field at 3 Legends Stadium. The Miners rolled to a 19-2 win in the opener and a 12-0 victory in Game 2.

Both games were halted after five innings by the 10-run rule.

Max Demarais of Butte gets ready for a throw to first base. (Bill Foley photo)

Reece Cox of Butte settles under a pop up to second base. (Bill Foley photo)

Butte catcher Eyston Lakkala laughs as teammates taunt him for jumping out of the way of a slow curve ball. (Bill Foley photo)

Miners Eric Hart, left, and Zach Tierney give a thumps up after lobbying for their photo to be taken. (Bill Foley photo)

Evan Starr of Butte is greeted by teammates Reece Cox (with a helmet) and Kian O’Neill. (Bill Foley photo)

Butte’s Eric Hart smiles while being teased for a bad dive back into first base by coach Jeff LeProwse in Game 2. (Bill Foley photo)

“It’s the reason they’re our one and two guys. They came out and threw strikes,” LeProwse said. “If you don’t walk people, throw your off speed and fastball for strikes and locate, you’re going to have a lot of success. That’s what they did.”

Of course, the pitchers did not need to be perfect with the run support they got.

The Miners have won seven of their last eight games heading into the Southern A District tournament, which starts Thursday in Three Forks. In four home games this weekend, Butte’s offense accounted for 47 hits and 60 runs.

“We’ve been hitting the ball really well,” LeProwse said. “It’s all 17 guys, too. It’s going to be interesting writing out a lineup for districts. We have our starters set, but we found some guys this weekend that if you need someone to pinch hit, they’re ready.”

Butte finished the regular season at 26-14 overall and 22-6 in league play. The Miners also finished high in confidence.

The No. 2-seeded Miners, who will likely take on Livingston in the first round, are definitely riding high at the right time.

“Confidence is a great thing to have going into a tournament, and I think we have a lot of it,” LeProwse said.

Lee and O’Neill each hit doubles in the game. Ethan Edwards joined Wahl with a two-hit game, and Egan Lester and Kenley Leary each poked a single in the win.

Wahl drove in three runs, while Leary, Lee and Hart each knocked in two.

Leary, the leadoff hitter, scored four times, one more than Wahl and O’Neill. Edwards and Coyt Stajcar each scored twice.

Cox wanted to play first base — if only for an inning.

Cox, whose right arm will be key for Butte at districts, played first in the fifth inning, and that meant he played all nine positions for the Miners this season.

Other than that, the second game was over before it even started.

Butte scored four runs in the first and six in the second to put the game away quickly.

Richards set the table from the leadoff spot, going 3 for 3 with a walk, two runs scored and two RBIs.

Wahl and Hart each had a two-hit game, and Stajcar tripled. Wahl, Hart and Stajcar each scored two times.

The Braves could only muster two hits of Wahl, but both went for extra bases. Smith tripled, and Simon Coleman doubled.