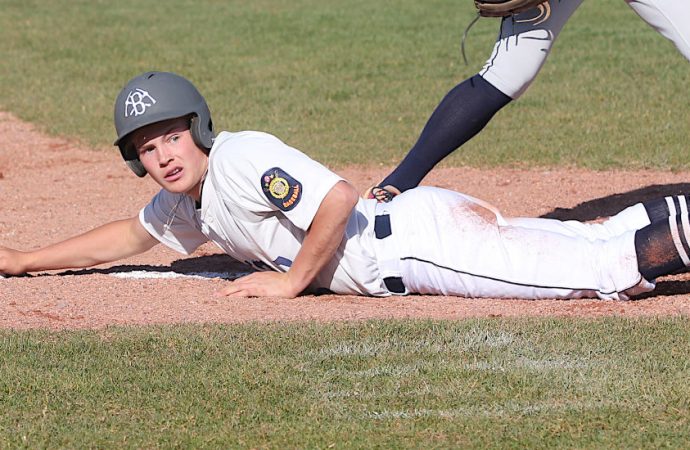 Butte Miner Kenley Leary looks to the home dugout after diving back to third base on a Game 1 triple Friday at 3 Legends Stadium. (Bill Foley photo)

The Butte Miners threw a lot of notable numbers around along with good pitches and some maybe not-to-good throws in the field Thursday night.

They added up to an 11-3, 15-9 sweep of the Helena Reps in a Southern A Conference American Legion baseball game at Miners Fieldin 3 Legends Stadium. The beautiful evening showcased at the Copper Mountain Sports and Recreation Complex facility occasionally co-lit by faraway fireworks was the first in Butte in about a week, one worthy of baseball anyway.

For the numbers, though, the win was the Butte team’s 14th in its last 16 games, raising the Miners’ overall record to 16-4 and their league ledger to 15-9.

The numbers head coach Jeff LeProwse liked best, though, on Thursday were the six two-out runs Butte scored in the first game and the 12 the Miners put up in the nightcap, with two out. The clutch hitting helped overcome the error bug that bit Butte, the Miners committing eight in the twin bill.

“We had so many two-out big hits,” LeProwse said, especially noting a bases-loaded double by Coyt Stajcar in the second game that plated three runs. 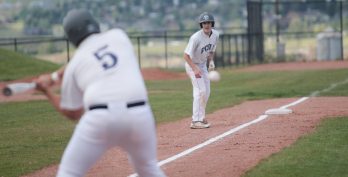 Rylan Richards of Butte leads off third as teammate Aidan Lee zeros in on an RBI single. (Bill Foley photo) 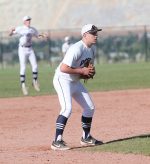 Butte Miner Kenley Leary looks to the home dugout after diving back to third base on a Game 1 triple Friday at 3 Legends Stadium. (Bill Foley photo) 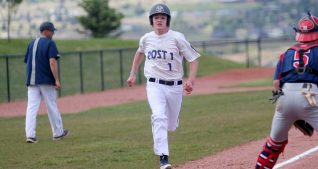 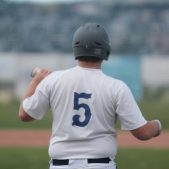 Stajcar offered a statement, too, saying the team “played good on offense, and that pleased the parents in the stands, I think.”

“We hit the ball really well,” LeProwse said. “But, we have to clean up ouir defense. We have to put teams away, stay focused the entire seven innings. We pitched great tonight, too, but our defense was subpar.”

Butte received another complete-game effort from Ryan Wahl in the first game, in which he struck out seven and walked only one, and a good outing by versatile star Rylan Richards in the nightcap. The pitch-count limit kept him from finishing, giving way to Hunter Salcido in the seventh inning, and Salcido finished it strong., Richards struck out 10 batters, walked only one.

“We gave up (defensively) a lot of runs in the second game,” LeProwse said. “Rylan pitched very well. If we don’t make the errors, he finishes that game. Pitch count, we had to take him out.

“The two guys we threw tonight are our top two right now and what they did is what I expect of them. They hadn’t pitched in quite awhile  Our Nos. 4, 5, and 6 guys need to get better and they’ll be going on Monday. At this time of the season, we’re looking for our pitchers to be under 105 pitches through seven innings. That’s where we need to be for the state tournament.”

The coach said the pitchers did a good job Thursday of not letting errors bother them and just focusing on their jobs of throwing strikes.

A glaring sun wreaked some havoc with fielders trying to track the flyballs and throws, leading to some misplays.

The Miners will play at Livingston on Monday, then return home to take on Bozeman on July 10 in Southern A doubleheaders.


Butte plastered five runs on the scoreboard in the bottom of the first inning and was never in danger of being caught. The Miners’ first three batters loaded the bases on a hit batter, error and another hit batter. Aidan Lee then singled two runs home and Eric Hart’s base hit refilled the bags.

Kenley Leary grounded into a fielder’s choice that scored a run, but erased Hart. An out later, Reece Cox doubled home two runs.

“We did a good job of wearing some pitches tonight,” LeProwse said, alluding to the plethora of hit batsmen marching into the Miners’ boxscore. “Taking it on the arm, getting a free base. The guys know it’s going to sting a little bit.”

Helena scored in the second inning when Cade Coate reached on an error, got to third on a double by sterling Reps catcher Greyson Ahman and then came home on a groundout by Mike Hurlbert. The Reps tallied again in the third on two more Butte errors.

The Miners got the runs back in their half of the third. Kenley Leary stroked a one-out triple into the right-center alley. An out later, Reece Cox was hit by a pitch and then Evan Starr walked to pack the sacks. Richards ripped a two-run single up the middle.

Hunter Bratcher tripled to lead off the Helena fifth and came home on a single by Judson Seliskar for the Reps’ last run of the game.

The Miners answered with three runs in the fifth inning and their last run in the bottom of the sixth. Cox started the Butte fifth with an infield hit, stole second and went to third when Starr was safe on an error. Richards hit into a fielder’s choice that froze Cox at third and forced out Starr at second. Richards was thrown out trying to steal second base before Egan Lester laced a single that plated Cox. Infield hits by Wahl and Lee loaded the bases and then Hart delivered a two-run single into center field.

The bottom of the sixth saw Kian O’Neill start with a single to left, then speed all the way to third base on a wild pitch. Richards singled him home an error and out later.

Wahl retired the Reps in the top of the seventh with two strikeouts and coaxing a groundout.

Helena grabbed a 3-0 lead in its first two innings of at-bats before Butte wiped it out. Two Miners errors put two Reps on base and they rode home on a double by Will Brent, who wound up with five runs batted in during the nightcap.

Tyler Roberts reached second base on a flyball that sun-blinded the fielders. He scored two outs later on a wild pitch, having reached third on Payton Tavory’s sacrifice bunt.

Butte had enough. The Miners exploded for seven runs in their half of the second frame. Leary singled and Cox and Stajcar both walked to fill the bags. Eyston Lakkala drew a walk to force in Butte’s first run of the game. An out later, Lester lofted a sacrifice fly that brought home Cox. Aidan Lee singled to center, knocking home two runs, then Hart drove in another with a double. Leary lined a screaming shot off Helena third baseman Tyson Mooney’s glove and the Miners’ last two runs of the inning scored. They had taken a 7-3 lead.

Helena recouped two of the runs in the third inning. Quinn Belcher beat out an infield hit and, after an out, Seliskar drew a walk. A strikeout later, Brent singled both runners home after they moved up a bag each on a wild pitch.

It was the bottom of the fourth before anybody scored again. Wahl was safe on a one-out fielder’s choice, then Lee was hit by a pitch and Hart walked to pack the sacks. An out later, Cox walked to force in a run. Stajcar then clubbed his three-run double into right-center. He scored on a single to left by Lakkala. Then Richards walked and Lakkala zipped to third on a wild pitch before dashing home on an infield hit by Lester. The Miners had a 13-5 command going into the fifth inning.

Helena tallied twice in the fifth. Bratcher doubled into the left-center fap with one out. Selisar was safe on one of Butte’s five errors in the game. Mooney moved the runners ahead with a sacrifice bunt. Bratcher scored on a wild pitch and Seliskar got home on a Brent single.

Butte answered with its last two runs in the bottom of the inning. Lee reached on an error and scored an out later as Leary tripled to deep center field. Leary then sped home on a wild pitch.

Helena got a run in the sixth inning and another in the seventh, not nearly enough to stay with the hot-hitting Miners. An infield hit, fielder’s choice and error brought home Hunter Wallis with the Reps’ eighth run and they plated their last in the seventh when Seliskar doubled to left field, took third base on a passed ball and scored on Mooney’s bad-hop single.