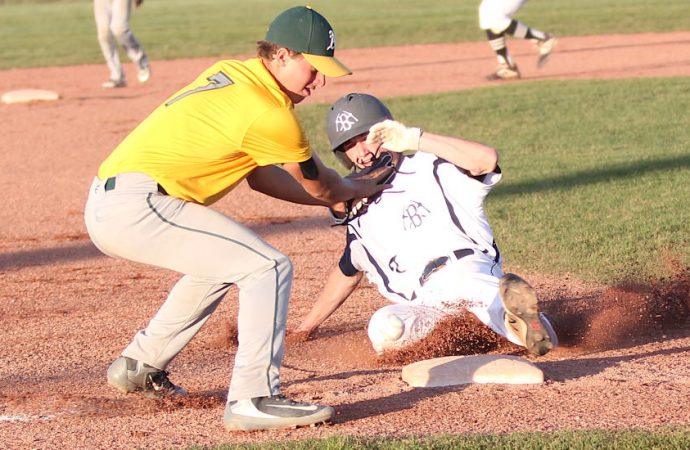 Butte's Rylan Richards slides safely into third base as Anaconda third baseman Cory Galle fields a throw during the first inning of the second game of a doubleheader Friday night at 3 Legends Stadium. (Bill Foley photo)

The Butte Miners’ seniors were honored in pre-game recognitions, then honored themselves with sterling performances in an American Legion baseball doubleheader sweep of the Anaconda A’s Friday evening at 3 Legends Stadium’s Miners Field in the Copper Mountain Sports and Recreation Complex.

Butte won by scores of 23-3 and 11-1 with both games shortened to 4 ½ innings by the 10-run difference rule, which goes into effect in the fifth inning.

Senior pitchers Ethan Edwards and Hunter Salcido both went the distance and three other seniors – Reece Cox, Coyt Stajcar and Ryan Wahl turned in strong efforts at the plate and in the field. The sixth senior, Ryan Burt, is presently sidelined with a knee injury. Wahl and Burt are both bound for college baseball while Cox is talking to recruiters. Wahl has signed with Jamestown and Burt with Mary, two North Dakota colleges, to continue their education and baseball careers.

“It was a great Senior Night,” Jeff LeProwse, head coach of the Miners, said. “Overall, I thought we played well in all four phases. We hit really well, we pitched well, ran the bases well and played defense well.

“I thought, in the second game, Hunter Salcido pitched unbelievably well. He came in and did a really good job tonight. We’re definitely going to need somebody to take Ryan Burt’s place in the rotation for awhile and Hunter Salcido took a step toward that. Ethan Edwards pitched a good game, too. Kenley Leary was set to be relief in both games.”

Miner shortstop Ryan Wahl fires to first for an out. (Bill Foley photo)

Butte’s Rylan Richards slides safely into third base as Anaconda third baseman Cory Galle fields a throw during the first inning of the second game of a doubleheader June 26 at 3 Legends Stadium. (Bill Foley photo)

Leary didn’t make it to the mound, thanks to the prowess shown by both Edwards and Salcido, but saw duty in left field. Edwards struck out six batters and walked one while scattering seven Anaconda hits. Salcido didn’t allow the A’s a run until the fifth inning. He finished with a six-strikeout two-hitter, allowing only one walk.

The pittance in free passes the Butte arms gave out pleased their coach.

The wins were the Miners’ ninth and 10th in a row in Southwestern A Conference games. They are 12-8 for the season, 11-3 in conference and have won 11 of their last 12 games overall. They are to play a doubleheader at Dillon Sunday, then return home for a twin bill on Wednesday versus the Helena Reps.


Anaconda took a 2-0 lead on the Miners and it only seemed to light the home team’s fuse. The Butte club played errorless defense behind Edwards and backed his effort with 20 hits, six of them for extra bases. They totaled 23 runs batted in with Rylan Richards and Wahl driving in four apiece. Richards slugged two triples and Wahl walloped. Each also socked a double, as did Leary.

Richards also made the defensive play of the game, sprinting in from center field for a diving catch of a flyball, then throwing to first base to double off a baserunner.

A fielder’s choice by Andrew Tallon and singles by Pat Galle and Jayce Coughlin set the table for Connor Sampson’s two-run single to left field that staked the A’s to their 2-0 lead in the first inning.

Butte wiped it out once it got to the plate. Richards led off with a triple and Egan Lester worked a walk. Wahl doubled both in to tie the score. Kian O’Neill lofted a bases-loaded sacrifice fly to score Wahl with the go-ahead run.  Cox walked with the bags full for a 4-2 Miners lead after one inning.

Butte increased its lead to 10-2 in the second frame. Lee whacked a two-run single with none out and, after two wild pitches got him to third base, scored on a base hit by Stajcar. An Anaconda error and a hit  batsman packed the sacks and Evan Starr brought in a run with a sacrifice fly. Salcido singled the bases loaded again before Richards delivered a two-run double.

The A’s got a run back in the third inning on back-to-back doubles by Galle and Coughlin. The Miners responded with an eight-run explosion. Cox drilled a bags-full single for two runs, Salcido brought in one with a sacrifice fly, Richards tripled home two runs, and a double by Leary, triple by Wahl and base hit by Zach Tierney each plated a run.

Five more were put on the Butte half of the scoreboard in the bottom of the fourth inning. Leary drew a packed-sacks walked with none out to score one, Wahl knocked in another by grounding into a fielder’s choice, then singles by Tierney, Eric Hart and Cox each tallied one.

Edwards gave up a harmless infield hit to Tallon with one out in the top of the fifth before finishing the A’s on a strikeout and flyout.

Butte grabbed a 3-0 advantage in the bottom of the first inning, loading the bases right away on a Richards single, an error and a hit batsman. One out later, Tierney walked to force in the game’s first run. Cox connected an out later for a two-run single scalded through third base.

The margin spread to 8-0 in the second inning. Edwards singled to lead off, then sped to third on an errant pickoff attempt. Richards walked and both raced home on a single to center by Leary. Wahl doubled. Hart plated Leary with a sacrifice fly. Tierney knocked an infield hit deep into the hole at shortstop. Stajcar followed with a sacrifice fly to bring home Wahl and then Tierney scored when Cox’s bouncer was misplayed.
The difference went to 11-0 in the third inning. Richards drilled a one-out double into the left-center gap. After a flyout, O’Neill was hit by a pitch. Both advanced on a passed ball and scored when Hart singled to left-center. Hart then got home on two wild pitches.

Salcido faced just 10 Anaconda batters from the top of the second through the top of the fourth. In the fifth, he hit Connor Sampson to start the inning and gave up the shutout on three wild pitches, before resettling and ending the night with a strikeout and groundout to first.

Tierney had, perhaps, the defensive gem of the game when he snagged a line drive while playing first base and stepped on the bag to double off Pat Galle, who had singled, completing the unassisted double play in the fourth inning. It helped snuff a potential Anaconda rally as Salcido whiffed the next batter.