Evan Starr is all smiles as he signs to play baseball with Dawson Community College Monday evening at 3 Legends Stadium. Starr sits between his father Jake, left, and Miners coach Jim LeProwse.

Apparently being part of a State and Regional championship American Legion baseball team is pretty fun.

Butte Miners catcher Evan Starr had such a blast playing this summer that he decided to give college baseball another try. The 2021 Butte High graduate signed to play at Dawson Community College Monday evening at 3 Legends Stadium.

“I have to take the opportunity to keep playing,” Starr said after signing in front of some coaches, teammates and family. “This summer and being with the guys on this team … there was just no way I could step away from baseball.”

The signing comes after Starr went one full school year at Montana Tech, where he registered a 3.98 GPA thanks to one A-minus. While he was settling in nicely in to the mechanical engineering program, Starr said he has to take a swing at continuing his baseball career.

“It was going really well. I really liked the classes I was in,” he said. “If I don’t go play after a year or two at Dawson, I probably just come back to Tech and finish that degree.” 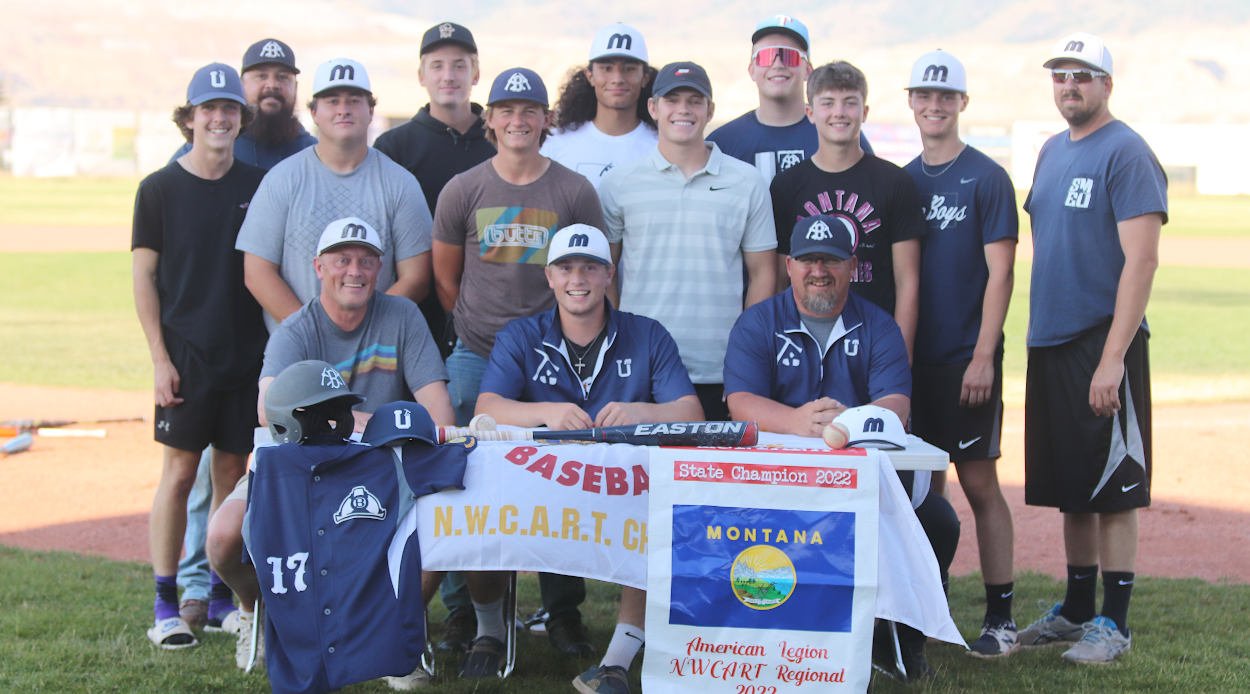 Teammates and coaches joined Starr for the signing.

Dawson is a two-year school, and Starr plans to leave with associate degree in physics. He also plans on continuing the hot hitting that he displayed for the Miners in the postseason.

“He some really key hits for us down the stretch,” Miners coach Jim LeProwse said.

That included a three-run home run to jump start the Miners offense in their tournament-opening win over Oregon at the Northwest Class A Regional Tournament in Vernal, Utah.

“I hit a lot better toward the end, especially in the regional tournament,” Starr said. “I hit the three-run bomb. That was special.”

LeProwse has some good contacts at Dawson after spending a decade there coaching the softball team. He tipped off Buccaneers coach Tyler Pollock that he might have a steal for him in the Mining City.

“I contacted Tyler and told him I had a guy for him,” LeProwse said. “I gave him Evan’s name. I said he’s a catcher and he’s got a really high baseball IQ.”

LeProwse noted that Starr got a 32 on the ACT.

“He’s a really smart kid,” LeProwse said. “He’s going to be successful at no matter what he does. He works hard and has a great attitude. He’s a really great kid to coach.”

While the offense came on late in the season, Starr’s strength is on the defensive side.

In 166 and a third innings behind the plate, Starr threw out 26 percent of base stealers. His .984 fielding percentage was the highest on the team.

“He blocks really well,” LeProwse said. “He’s got a good arm. He gets rid of the ball really fast.”

Starr spent four seasons playing for the Miners. His Legion career began in Deer Lodge, where his parents, Jake and Cheryl Starr, coached various sports. Starr transferred to Butte High for his last two years of school. He moved to take advantage of advanced-placement classes and to make it easier to play for the Miners.

Now, that move is paying off. Starr will move to Glendive on Sunday, and classes begin next week. Baseball practice follows soon after.

Starr signed while sitting at a table just behind where he caught pitches for the Miners. He said the signing will not be his last appearance there.

Next summer, the 19-year-old Starr plans to return to the Mining City and umpire Legion games.

“Egan said he might umpire next year, too,” Starr said of fellow Miners super senior Egan Lester. “It will be cool crew with me and Egan.”