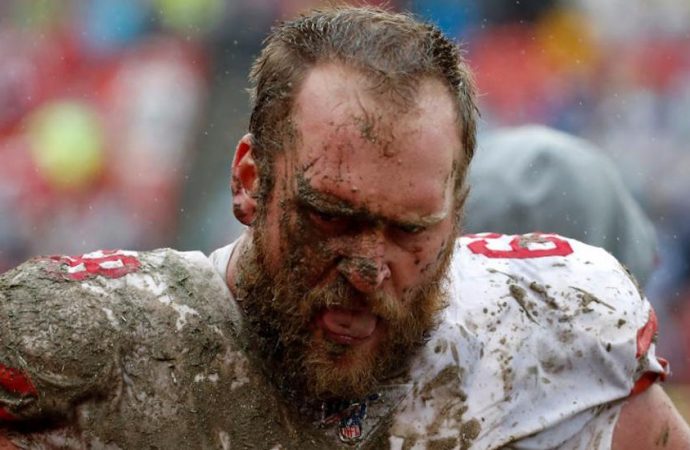 Glendive native and former Montana State three-year starter Make Person is shown during the second half of a San Francisco 49ers game at Washington on Oct. 20, 2019. (AP Photo)

It turns out that Mike Person’s last football game will be the Super Bowl.

The Glendive native with strong family ties to the Mining City told Greg Rachac of The Billings Gazette Sunday that he is retiring from the NFL. (Read Rachac’s story here)

Person, who turned 32 on June 17, started at right guard for the San Francisco 49ers in Super Bowl LIV. The 49ers released the nine-year veteran in March.

Person, a three-year starter for the Montana State Bobcat, was drafted by the 49ers in the seventh round of the 2011 NFL draft. He bounced around the league with stops in Indianapolis (twice), Seattle, St. Louis, Atlanta and Kansas City before rejoining the 49ers before the 2018 season.

Person is the son of Jim Person, a former Montana Tech star football player, and the late Shelley (Lowney) Person, a 1973 Butte Central graduate. His sister Sara (Person) Hauser is a former BC activities director.

Person was the subject of a Butte Sports column the week before the 49ers played Kansas City in the Super Bowl. A large number of Person’s family members watched the Super Bowl at the Knights of Columbus in Butte.