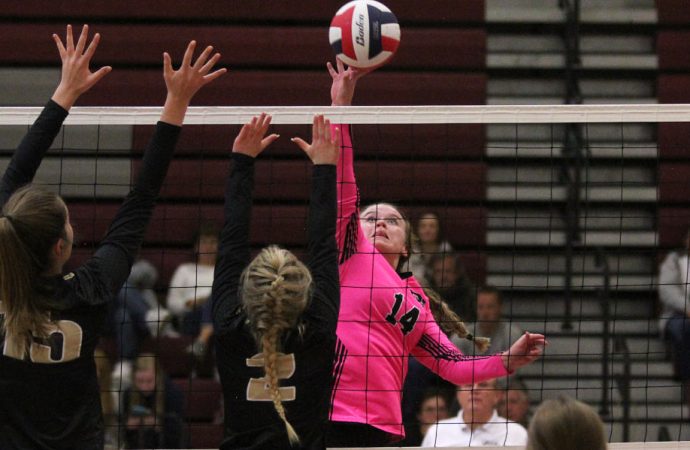 Butte Central found its game late in its volleyball tournament, but the discovery was what the Maroons’ head coach, Becky Hancock, was looking for in the midst of strong competition.

Butte Central scored a comeback 24-26, 25-15, 25-11 victory over Lewistown in the consolation final of the Blocktober Classic held Saturday in the Maroon Activities Center. (Results)


It was one of three big wins the Maroons achieved Saturday to offset losses in other matches.

Butte Central worked through the consolation bracket and shook off Stevensville 22-25, 25-20, 15-10 in the consolation semifinals to gain the spot opposite Lewistown, which beat Browning in two games.

“We played well in this match,” Hancock said after BC’s win over Lewistown. “We played a good match with Corvallis in pool play. We started slow and found energy. It’s the kind of energy we needed, the kind that gives us momentum.”

“It was key for us today to go off like what we did. We finished strong today. Maci Reopelle had an awesome tournament. She made key plays for us all over the court. She provided the spark we needed at times.” 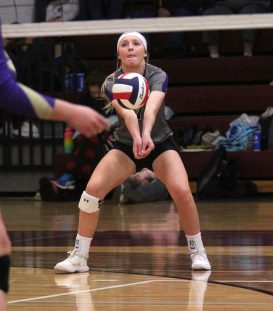 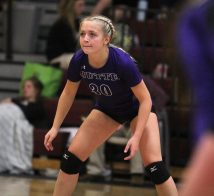 Butte Central’s Maci Reopelle hits the ball as Stevensville’s Maddalena Margini, left, and Maddie Weber go up for a block during the Oct. 19 Blocktober Classic at the Maroon Activities Center. (Bill Foley photo) 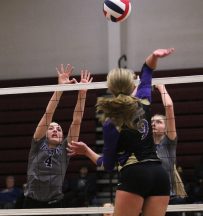 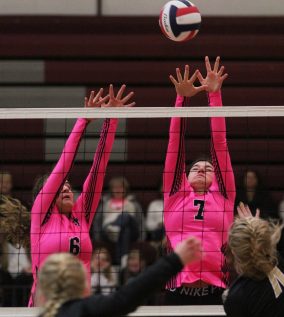 Butte Central was sharpest in the tie-breaker match with Lewistown. The Maroons never trailed in it. Reopelle’s opening kill in the third set started her team off. Lewistown played nearly point-for-point and was behind by only 8-7 after a kill by Taylin Trafton. Junior Avery Kelly then hit three straight points for BC, scoring on a kill and two stuff blocks. A Lewistown four-hit violation followed and Butte Central had a 12-7 lead in the set to 15. An Eagle’s hitting error brought match point at 14-10. Steph Olson sacked a kill for Lewistown before a wayward ricochet graced the Maroons’ efforts.

Libero Sophia Burton hit from the second row and the shot bounced off the top of the net, veering sharply left as the Eagles took up defensive stations on the right side. It fell to the floor a winner.

“The (Butte Central) girls’ athleticism showed up in the last match,” Hancock said. “It’s what we’ve been focusing on, using the abilities — moving more fluidly and in more rhythm.”

“The energy and communication is what I’ve been looking for and think we sometimes lose it.”

Lewistown won the first game in a tight set. The scores were never more than two points wide in the running of the set. The Maroons’ last lead was 24-23, set point, after an Eagle’s attempt sailed wide of the boundary line. Lewistown responded with kills from Trafton and Olson and held a 25-24 edge, winning the set on an ace serve by Jessica Morgan.

BC dominated most the of the way in the second set. They took the lead for good at 2-1 after a Lewistown hitting miscue and steadily built on the difference. Burton served a four-point run in which she twice aced as the margin widened to 8-2. Lewistown rallied to within 16-13, but Reopelle then towed the line for another four-point run in which she also aced twice. A block by Amira Bolton gave Butte Central set point at 24-15 and then Cassidy Strizic accurately placed a tip to cap the game and bring on the tiebreaker set.

To get to the consolation final, the Maroons had to pull off a similar victory against Stevensville in the consolation semifinals. The Yellowjackets won a closely contested first set that saw the score tied at 21-all. Daphane Engel scored twice in a row in gaining Stevi a 23-21 edge and then Magdalena Margini tallied on a block for set point. A Stevensville serve missed long before one by BC tangled in the net, which ended the set.

The Yellowjackets buzzed out to a 5-0 lead in the second set as Butte Central suffered some unforced errors. The Maroons righted their direction and caught up at 14-all when Reopelle fenced up a block. Two Stevi errors allowed BC the lead and Butte Central took advantage. The Maroons got to set point, 24-19, on a kill by Strizic, and Kelly then tipped home the set-ender.

Stevensville got out on BC 3-0 behind a pair of aces dealt by Engel. Butte Central played its way back and tied the score at 4-all on a Strizic kill. The Maroons then took the lead for keeps on a tip by Bolton. They led 13-10 after a Kelly block, received match point on a Yellowjacket miscue and won on another Kelly block.

For the day, the BC leaders included Strizic with five aces and 18 kills, Reopelle with four aces, 47 digs, 36 assists and 21 kills, Burton with four aces and 33 digs, Emma Keeley with 28 assists, Kelly with 14 kills and 10 blocks, and Bolton with 11 kills and six blocks.

“We’re looking forward to hitting the second half (of the Southwestern A Conference) season,” Hancock said. “We play Dillon on Thursday for our Pink-Out game, here.”

“The conference is solid. You always have to focus on the next game coming up and you can’t look past anyone. We kind of did well in the first half and so we have to take our game up another notch in the second half.”