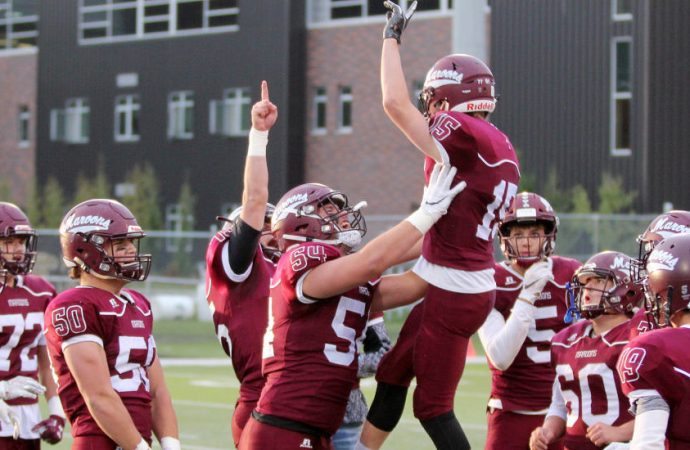 This is a loser-out game Butte Central and Polson face Friday night in their Western A Conference high school football game. The winner will lock up a spot in the state Class A playoffs. A loss by Butte Central will eliminate the Maroons from postseason play while a Polson defeat would likely KO the Pirates.

It is Senior Night for the BC team as it closes the home portion of its season. The BC team is 3-4 this season and will finish the regular season on the road next week with a game at Columbia Falls.

Polson is 4-3 and holds the playoff berth Butte Central is hunting going into the game. A win for the Maroons would give them the tie-breaker advantage over other contenders. Polson finishes its regular season next weekend against top-ranked Hamilton.

The Butte Central effort is to be led by seniors in their hometown send-off. Neither of the Simkins twins, Jared or Matt, will play because of injuries, but will be honored in introductions before the game with fellow senior players Aaron Richards, Guido Ossello, Thomas McGree, Trevor Neumann, Braden Harrington, Luke Heaphy and David Granell.

Jared Simkins was lost to concussions for the season earlier in the fall, and Matt Simkins is sidelined this week with a back injury that has been plaguing him the last several weeks, Peoples said.

After starting the schedule 0-3, the Maroons have won three of their last four games, including a 42-6 rout of Browning last week.

“Since the Corvallis game, our offense has been finding it identity and has been finding its rhythm a little bit,” Peoples said. “We’ve been playing well recently in every facet. This is a good time of the year to be playing our best football.”

The Polson quarterback (Bo Kelley) is 6-foot-1 and kind of stocky-built (210 pounds),” Peoples said. “He throws the ball well and when he gets out of the pocket, he’s a load to tackle.

“He has a couple of receivers who can go and catch the ball.”

Kaden Glinsmann is in his first year as the head coach of the Pirates. Dugan Davis, a 5-11, 165-pound senior, leads the Polson running game and is coming off a 118-yard performance against Stevensville, an 8-0 Pirate win. The Pirates’ top receiver is 5-10, 160-pound freshman Jarrett Wilson while sophomore Colton Graham has developed into a another reliable pass-catcher. Polson has good size on the line with 13 players on the roster weighing in at 205 pounds or more, up to 6-1, 285-pound freshman Keaton Flammond.

“Defensively, they’re a real solid football team and their offense is really balanced,” Peoples said. “Wilson, the receiver, is a playmaker type, and their back (Davis) runs the ball well.

“The game has evolved at the high school level where you can’t be a one-dimensional team anymore.”

Butte Central, except for the loss to injury of the Simkinses, should be close to full strength this week, Peoples said. Heaphy is back after sitting out the Browning game with a shoulder injury and junior guard Bryan Holland will play at least on offense. He hurt an ankle against Browning.

Sophomores Drew Badovinac and Luke Garrison received extended playing time last week because of the injuries to the front-liners.

“It’s always good when you can build depth and win a game at the same time,” Peoples commented, though relaying it would be even better to do it without incurring injuries.

The Maroons’ starters on defense are to be Harrington and Richards at the ends with junior Ian Williams and sophomore Eric Hart at tackles, and junior Ty Driscoll rotating through as relief. Holland might end up sharing his inside linebacker spot with Garrison while Ossello and sophomore Eyston Lakkala play on the outside. Heaphy and Neumann are to be the cornerbacks while McGree is at free safety and junior Egan Lester at strong safety.

On offense, Hart will be at center with Holland and Williams at the guards, the Montana State-committed Richards at one tackle, and Driscoll sharing the other tackle spot with freshman Riley Gelling. Harrington and Ossello are to switch off at tight end. They’ll both be of the field at the same time on offense with one at receiver while the other is at tight end. Ossello caught three touchdown passes last week. Harrington caught one as McGree, the quarterback, threw for five TDs, all inn the first half. Lakkala, an H-back offense, took in the other TD grab. Lester ran for 129 yards, including a 15-yard TD, in his best game at running back. Neumann will also start at a receiver spot and Heaphy may rotate through as a pass-catcher.