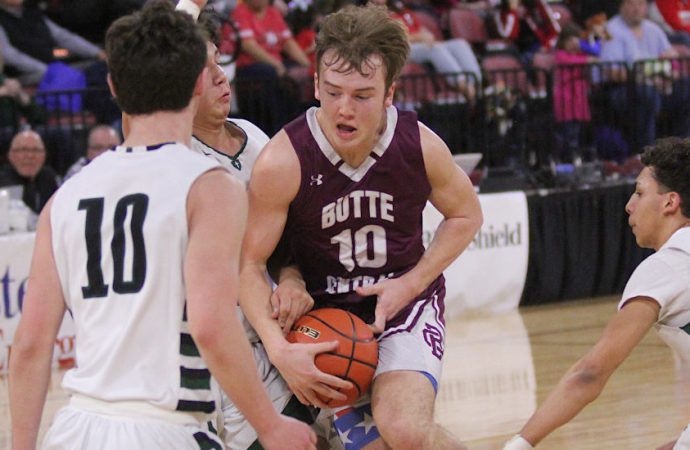 BILLINGS — The message to the Butte Central boys’ basketball team was pretty simple.

The Maroons needed to toughen up.

Head coach Brodie Kelly called time out with 5 minutes, 57 seconds left in the second quarter to tell his team just in the opening round of the Class A State tournament at The Metra.

Butte Central outscored defending state champion Billings Central 43-29 from that point, and the Maroons overcame a nine-point deficit for a 51-46 win to advance to Friday’s 5 p.m. semifinal. (Stats)

The Maroons will battle Browning, which beat Laurel 83-59. Livingston will play unbeaten Hardin in the other semifinal. (Bracket)

“He told us to quit being soft,” Butte Central senior Braden Harrington. “We were playing soft and not very tough. They were out working us, out hustling us. At halftime, they had six offensive rebounds, we had one.” 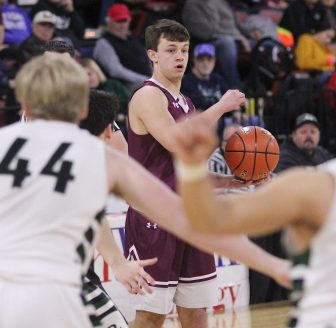 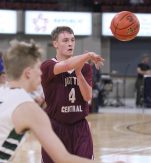 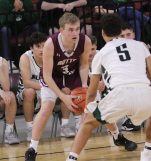 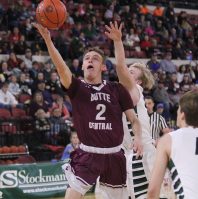 Jake Simkins goes up for a hoop that was negated by a traveling call Thursday in Billings. (Butte Sports file photo) 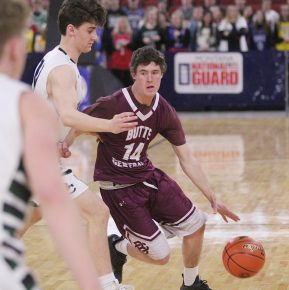 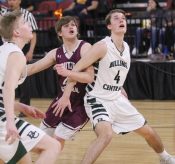 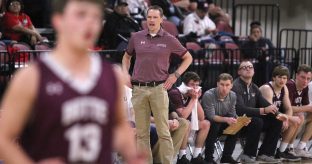 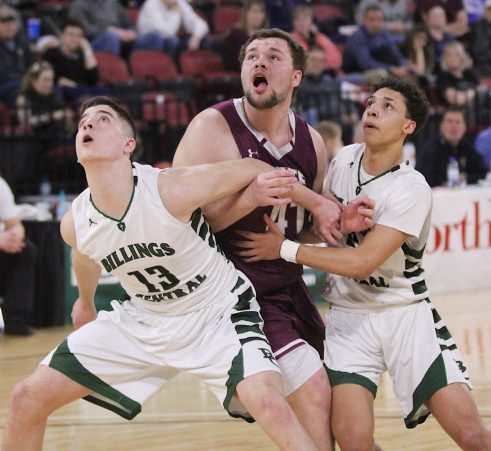 Kelly said his Maroons did not responded well to the physical Rams for the first 10 minutes of the game.

The Maroons, who trailed 17-10 at the time of Kelly’s timeout talk, busted out of the break with a 12-4 run to get back into the game.

Billings Central led 30-25 at halftime, and you could get a sense that the second half would belong to the Maroons quickly after the intermission.

Jared Simkins scored on a put back on Butte Central’s first possession of the half.

“We only had one offensive rebound in the first half,” Kelly said. “The first possession of the second half was a put back.”

The Rams still clung to a 41-37 lead heading into a fourth quarter in which Butte Central put on a man-to-man defensive clinic.

The Maroons held Billings Central to just five points over the 9:25.

“We gave up 30 points in the first half and 16 in the second. We challenged everything,” Kelly said. “Our defense was outstanding. We only gave up five points in that fourth quarter, and one was the deep three.”

Jared Simkins got things started with a three-point play before Luke Heaphy drained a long 3-pointer to put the Maroons up 43-41 with 7:02 left in the game.

It was Butte Central’s first lead since Harrington opened the game with a 3-poitner. It was a lead the Maroons did not give back.

A free throw by Matt Simkins and two more by Harrington extended the lead to 46-44 with 3:29 left.

The Rams got on the board for the first time in the final frame when Mason Yochum hit a long 3-pointer from the top to cut it to 46-44.

Butte Central answered when Matt Simkins fed his brother Jared for a hoop and a 48-44 advantage with 2:03 left.

Malaci Stewart scored to pull the Rams to within 48:44 at the 1:38 mark, and Harrington, who is playing through a hand injury, hit one of two free throws to make it 49-46 with 22.6 seconds on the clock.

Billings Central’s Charlie Parkan saw a 3-point attempt rattle in and out, but Stewart got the rebound, and Billings Central got a time out with 2 seconds left.

Matt Simkins tipped the in-bound pass to teammate Gator Yelenich, whose two free throws with :00.3 on the clock eliminated any Billings Central miracle.

Kelly pointed to the play of the Simkins brothers for leading the way on the boards and on defense.

“Those two were so good today,” Kelly said, pointing to the twins’ toughness, smarts and effort level. “The things that people don’t see is all the bailing out they do. The being in the right spot, helping each other has just been awesome.”

Harrington scored 12 of his game-high 21 points in the first half. He also led the Maroons in coolness.

If he was nervous with the halftime deficit, it certainly didn’t show. Before in bounding the ball to start the second half, Harrington joked around with an official before going over to say, “What’s up” to KOPR play-by-play man Ron Davis, who was calling the game from court side.

“That’s Braden,” Kelly said, shaking his head with a laugh.

“Oh, I was just telling (the official) he might have shortened me a point there,” Harrington said. “I thought I had a couple of and ones there that he didn’t call. But it’s just all jokes. I’ve known him for a couple of years now.”

After Harrington’s three to start the game, the Maroons did not have much to joke about early on.

The Rams led 12-6 before opening the second quarter with a 5-2 run.

When Stewart scored off a turnover, Kelly had enough and called time out.

“Our offense was terrible in the first quarter. Our defense was awful, too,” said Harrington, who took three key charges. “That timeout was just to get us together to make sure we got our toughness back.”

Jared Simkins and Heaphy each scored 10 points for the Maroons. Heaphy also dished out four assists in the victory.

Yelenich tossed in four, while Matt Simkins and Trevor Neumann each scored three.

Bryan Holland and Aaron Richards also contributed to the win that lifts the Maroons to the semifinals for the second straight year and for the 10th time in 16 years under Kelly.

Harrington said it was fun to come out on top on the battle of the BCs.

“We don’t get to play them anymore, so it’s just fun to be the better … well not the better … actually, we’ll just say the better Central. It just feels good.”

Now, the 19-4 Maroons will get ready for Friday’s semifinal game.

Harrington said the Maroons are taking nothing for granted.

“We know what to expect,” he said. “It’s never going to be easy at state. All eight teams are good, and they’re here for a reason. We know we have to bring it every game to survive and advance.”