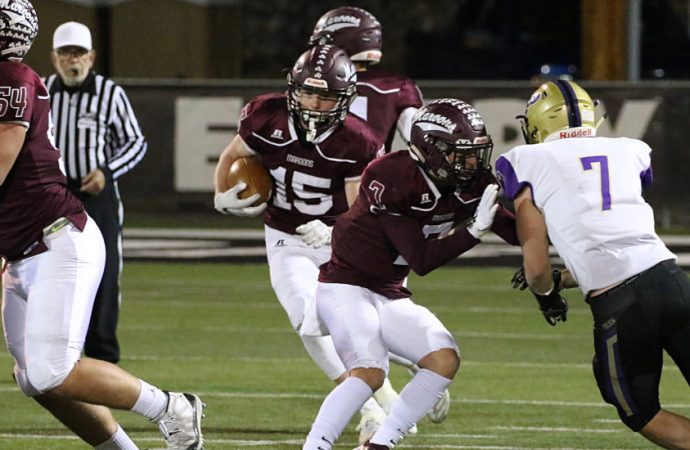 Aaron Richards wanted to credit Butte for what’s going on locally in football.

Richards, one of nine Butte Central seniors on the football team, just finished gaining a sack, recovering a fumble, blowing open some line holes and harassing the Polson backfield in a fine all-around game in the trenches that helped the Maroons beat the Pirates 35-12 Friday night in an important Western A Conference game at Bob Green Field on the Montana Tech campus.

“This year is pretty special,” the 6-foot-4, 280-pounder said. “Those guys over at Butte High are friends of ours and our win tonight was special. This is an exciting time for Mining City football.”

He was speaking, too, of Butte High’s Western AA Conference championship-clinching 43-20 victory over Missoula Big Sky in Missoula that kept the Bulldogs undefeated this season, maybe as much as he was describing football in the BC camp.

“This season is going by quickly,” he said. “We’re happy to keep it alive.”

Richards is a four-year starter as a lineman for Butte Central who has agreed to take his abilities to the Montana State Bobcats for college football beginning next fall.

“We knew it was going to be our last home game tonight,” Richards said about Senior Night. “It got a little emotional out here, but we got it done.”

The Maroons did. The seniors played some big roles. Quarterback Thomas McGree ran for two touchdowns and passed to senior receiver Trevor Neumann for another. Neumann also picked off a Polson pass. Guido Ossello saw duty at six positions — wide receiver, tight end, quarterback, punt returner, outside linebacker and free safety — while throwing his first career TD pass. It was a 9-yarder in the fourth quarter to fellow senior Braden Harrington while McGree was on the sidelines having a cut on his handed treated. Ossello’s 40-yard punt return set up a touchdown earlier in the fourth quarter. 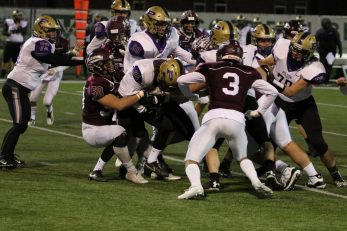 Polson’s Dugan Davis is brought down by a host of maroons, including Ian Williams (50). (Shelly Davis photo)

Senior Luke Heaphy played air-tight defense in the secondary and senior kicker David Granell, a student from Spain, successfully kicked all five of his extra-point opportunities. Twins Jared and Matt Simkins, who have been three-year starters for the Maroons, were on the sidelines, unable to play because of injuries.

“I want to congratulate our seniors,” BC head coach Don Peoples Jr. said. “We have a lot of football left. I’m really proud of our kids. We’ve had a lot of adversity this year with injuries and the kids and coaches have hung together.”

The win put Butte Central at 4-4, the same as Polson, and gave the Maroons the tiebreaker edge over the Pirates when berths and seedings for the state Class A playoffs are finalized next weekend as the regular season finishes. Peoples said a win by BC at Columbia Falls clinches a spot for Butte Central, as would a loss by Polson to currently top-ranked Hamilton. The top six teams in each the Eastern and Western conferences advance to the playoffs.

On a chilly night, it took a little time for the game to generate some heat. Butte Central scored first when McGree found Neumann outrunning the Polson secondary for a 37-yard touchdown stike on the third play of the second quarter. By halftime, the Maroons led 21-0 after McGree dashed into the end zone from 15 yards out and tunneled in from a yard away. Only 42 seconds were left in the second quarter when McGree tallied his last TD.

“It was a weird tempo in the first half,” Peoples said. “Our guys fought hard and got us that touchdown just before the end of the half. It gave us some good momentum for the second half.”

The BC defense was sturdy and held Polson’s running game to only 15 yards for the contest. The Butte Central running game, though, flourished as junior Egan Lester set a personal record for the second week in a row by rushing for 145 yards against Polson. McGree gained 77 and passed for 165.

Peoples said Butte Central’s offensive surge in recent games can be attributed much to the protective club being removed from McGree’s broken left hand. The hand healing,  the coach said, has allowed for McGree to perform the read-option package better, opening it up for bigger gainers and quick scores.

The teams held each other scoreless for the third quarter, then each put up a pair of touchdowns in the fourth. The Maroons had a 28-0 lead after Lester tallied form 8 yards away on the first play of the last period. The Pirates finally broke onto the scoreboard when quarterback Bo Kelley tossed an 8-yarder to Ryker Wenderoth to take advantage of a recovery of a BC suffered at its own 48-yard line.

Ossello took over at QB while McGree’s cut was fixed and led a Butte Central drive that ended with the 9-yard TD flip to Harrington. The last score was a 62-yard touchdown for Polson when Colton Graham picked a pass deflected by Neumann out of the air and sped to the end zone, a beneficiary of a fortunate bounce for the Pirates.

The Maroons’ defense sacked Kelley five times with Richards, Harrington and Ian Williams all in on two apiece.

“I thought (assistant coaches) Danny (Peoples), Doug (Peoples) and Clay (McQueary) put together a great offensive gameplan,” Don Peoples Jr. said. “A lot of credit goes to the kids, too, for executing it. I have to give a lot of credit to the defensive guys, too. I’m really proud of our kids.”

Richards said the coaches had an easy sell.

“The offense, going in, we knew we had a good gameplan,” he said. “ ‘Hugo’ (Bryan Holland) was giving all he had (playing on an injured ankle) and Ian ran so hard tonight. He’s quick AND strong.

“The defense played a good game. (The Pirates) got that last TD, but it was a great play and a great catch on a ball Trevor Neumann made a great play on when he tipped it away (from the intended receiver).”

The seniors could smile on their way out, and they did.