Butte Central and Browning will meet at Bob Green Field on the Montana Tech campus for a 7 p.m. kickoff in a Western A Conference high school game. Butte Central is coming off a 49-14 home loss to Polson last weekend and the Indians are going to try to bounce back from a 41-0 home defeat at the hands of Frenchtown.

The Maroons will be honoring St.Ann’s Grade School alumni before the game with introductions and their carrying of the “We Are BC” flag onto the field. A barbecue for those alumni will begin at 6 p.m. at the field. Clothing and memorabilia will be sold with proceeds going to the Butte Central Faculty Endowment fund. Fans are being encouraged by BC to wear gold and gray, St. Ann’s colors, to the game.

“The kids always like wearing the gold jerseys (for the legacy game),” Butte Central head coach Don Peoples Jr. said. “It is motivating and a great way to bounce back.”

St. Ann’s closed in 1969 when the Butte Catholic Grade Schools all shut their doors.

Peoples said the Maroons were eager to get back to work and erase the memory of the loss to Polson, which occurred at Naranche Stadium when Bob Green Field was deemed not yet game-ready due to some technical and electrical matters. The facility and the BC team are ready to go,, now.

“We got back to basics and the kids worked extremely hard for three days,” Peoples said Wednesday night while looking forward to another strong practice Thursday before the Friday game. “They’re anxious to play again on Friday at home.

“We spent a lot of time on game film and felt we did a lot of positives against Polson. But, we lacked consistency and made little mistakes that wound up really hurting us.”

The Maroons did have several good moments. Junior Jack Keeley passed the ball well at quarterback and senior receiver Kyle Holter caught six balls for more than 100 yards to show a dangerous air attack in the BC arsenal. It was complimented by TD catches from Zane Moodry and Dougie Peoples. Rye Doherty and tight end Eric Loos also looked good in the receiving corps. 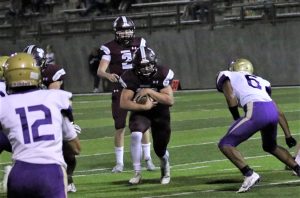 Senior Konnor Pochervina’s ankle injury on the first series of the second quarter hampered the Butte Central ground attack, though. Peoples said Pochervina’s status will be re-evaluated before game time. Holter and sophomore Justus McGee may see time there depending on if and how much Pocherviina, a linebacker on defense, can play, coach Peoples said.

The Maroons’ defense gave up some big plays and the 49 points last week, but also got to standout quarterback Jarrett Wilson six times for sacks. Speed and strength were positive elements.

“Konnor tried to come back (against Polson), which we appreciated,” Peoples said. “He was just hampered by the injury.”

“Browning is enormous up front and has a lot of really good athletes,” he said. “They’re disconcerting to play because they seem to have all the components to be a good football team. We can’t take them lightly. We have a lot of respect for them. They always have good athletes and they always play hard.”

After Polson showed the BC coaches what they needed to fix for Butte Central, Peoples said he, the coaching staff and the players are all anxious to see if they did so this week.

“Week one to week two always shows the biggest improvement in a football team,” he said, “because weaknesses don’t get exposed until you line up against another varsity.

“Also, the first game, the cardio conditioning is a factor.”

“The way Polson played was a really a challenge for us,” coach Peoples said about the Pirates lining up in passing sets 65 times with the talented Wilson controlling their offense. “So, we still feel like we have a chance to be a good football team and have a chance this week to take a step forward.

“We’re excited to get out there and be better. That’s for sure.” 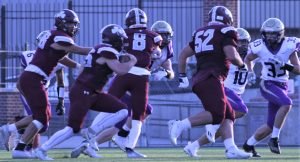 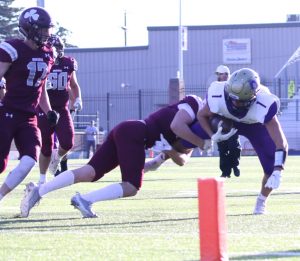 On defense, the Kibler brothers will man the tackles with Loos and Gelling on the ends. Pochervina, Moodry and Doherty are slated to start at linebacker assignments with Holter, Peoples, Keeley, McGee (5-11, 175) and Jake Tauscher (5-11, 165, junior) seeing time in the secondary.

Keeley is also the punter while 5-11, 165-pound senior Ethan Andersch displayed a strong and accurate leg as the kicker.