Maroons ride second half to first win of season 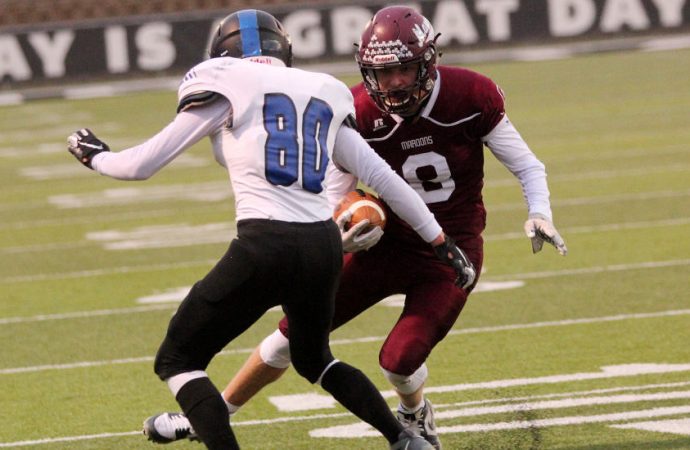 Four touchdowns running with the ball, two touchdowns passing it and Butte Central quarterback Thomas McGree insisted he had a lot of help as the Maroons beat Corvallis 38-6 Friday night.

BC cast a lot of stars for the game,  Butte Central’s high school homecoming celebration and one that also honored the 50-year anniversary of the 1969 state Class A championship won by the Maroons.

Also, it was a happy ending. It was BC’s first win of the year after a three-game gauntlet of contenders to survive, and it was a Western A Conference contest played on the Bob Green Field at Montana Tech.

“It feels good to get a W,” Butte Central head coach Don Peoples Jr. said through a wide smile after the game. “I’m really proud of these kids. We left a lot of points on the scoreboard in the first half. We had to find our identity and in the second half, we did that.” 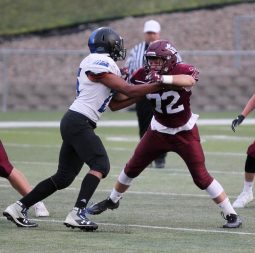 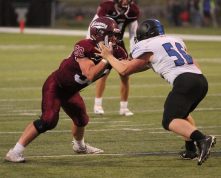 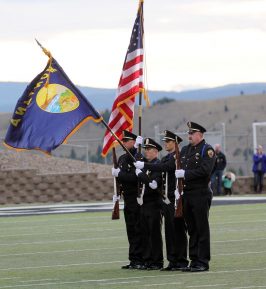 The Maroons scored early on a McGree 1-yard carry that sliced through the right side of the line for a 7-0 first-quarter edge, and then missed on two golden opportunities. A BC drive died on downs at the Blue Devils’ 8-yard line after Butte Central had gotten as close as the two. The Maroons’ next possession ended with an interception by Preston Griffith in the end zone, keeping BC out of it again.

Corvallis got on the board when quarterback Bryce Mayn hit Mace Marshall for a 39-yard touchdown strike. Butte Central’s Bryan Holland blocked the point-after kick, but the Blue Devils had pulled to within 7-6 and seemed to be clicking as a team.

The Maroons punted the ball away in the last minute, but Corvallis muffed the kick and Joseph Sehulster grabbed it for BC. After a penalty against the Blue Devils on first down, Butte Central found itself on the visitors’ 13-yard line with ticks nearly all evaporated off the first-half clock.

A McGree pass to Guido Ossello lost five yards and so McGree, with his team out of timeouts, had to spike the ball on second down to stop the clock. On third down, he lofted a high throw to tight end Matt Simkins, who was battling in the end zone with the Blue Devils’ defenders. The ball was batted in the air and Simkins glummed onto it after a juggle or two as he lunging and falling. The TD signal came with all zeroes on the clock and Butte Central went to the locker room with a 13-6 halftime lead.

“I thought that catch Matt made just before halftime was important in that ballgame,” Peoples said. “We felt we’d lost some momentum and those two boys (McGree and Simkins) stepped up and made a huge play there.”

It returned the emotional advantage to the Maroons, the coach and players thought.

“That was probably the play,” McGree said. “Matt made a great catch. At halftime, as close as the score was, we knew we had to step it up in the second half.”

So, BC outscored Corvallis 25-0 after intermission and the Butte Central defense not only held the Blue Devils off the scoreboard in the second half, but limited their first downs to three, all coming in the last possession of the game.

“Our defense did a great job,” Peoples said. “They gave up one drive the whole game. And, Corvallis is a big, physical football team and they run the ball hard.”

Meanwhile, the Maroons stacked 401 yards worth of total offense. McGree connected on 16 of 21 passes for 251 yards and he carried the ball 14 times for 129 yards. HIs biggest scoring play was a 57-yard keeper in Butte Central’s 18-point third quarter.

Oh, by the way, he did it with a cast on his broken left hand.

McGree touchdown runs covered 1, 8, 57 and 5 yards, and his TD passes were the 18-yarder to Simkins and a 10-yard throw to Luke Heaphy, which was also in the third quarter.

“Thomas McGree played a great game,” Peoples said. “He was not to be denied in the second half and he made some great plays. And, how about Guido Ossello? I thought Trevor (Neumann), Luke and Matt all made great catches, too.”

Ossello didn’t get into the end zone, but he positioned his team for scoring chances with seven catches for 132 yards, including a 52-yard link with McGree that led directly to the first touchdown.

“It was great, really great to finally get a win,” McGree said. “Aaron (Richards) had a big game and he got us going in the first half.”

Richards, a Montana State commit, anchored both lines and the lines have had depth depleted by injuries.

McGree said he is becoming comfortable to playing with the wrap on his hand broken two weeks ago.

Butte Central nearly doubled Corvallis’ offensive output and benefitted from three turnovers — , fumble recoveries by Simkins and Sehulster, and an interception by Heaphy. The Maroons also lost a couple of turnovers an interception and a fumble, but still rode out the threats and won.

Defensively, BC recorded five sacks on Mayn, who took over in the first half for Jaymark Liedle. Liedle did not play at all in the second half. Sophomore Eyston Lakkala recorded two sacks and partially blocked a Corvallis punt in a good defensive game for Butte Central. Simkins, Ossello and Richards also registered sacks. Ian Williams played a strong game on the defensive line, and joined with Holland, Richards, Eric Hart, Ty Driscoll and Riley Gelling in the offensive line to help move the attack forward. Egan Lester shared the running load with McGree, and also had a good game on defense.

“I’m happy for our kids,” Peoples, in his 31st year at the Maroons’ football helm, said. “They’d had a tough three weeks. They got a win and we can build on it and get better every week.”

BC is now  1-3 for the season and will play at Stevensville next Friday.