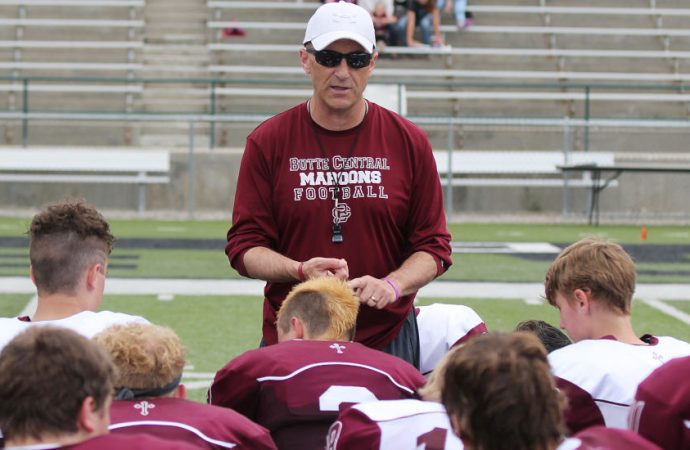 Butte Central football players have been looking toward this Friday, August 30 date ever since leaving the field in Corvallis last fall.

A loss to Corvallis kept the Maroons home in the postseason for only the second time this century and the returnees from such, especially the nine seniors, have been working toward atonement every since. The 3-6 season of 2018 was an injury-riddled one and no part of the BC schedule was racked with Butte Central injuries more, it seemed, than when the Maroons had to line up against Hamilton, Frenchtown and Dillon — state qualifiers.

The BC gridders will be taking on a big bite Friday as they try to start chewing away at one of the tougher-looking schedules in the state. Butte Central will open the season at home against Hamilton at Bob Green Field on the Montana Tech campus. The kickoff is scheduled for 7 p.m.

The Broncs are ranked No. 1 in Class A by the Treasure State Media Poll, which debuted earlier this week. Hamilton was followed in the Top 5 by Billings Central, Columbia Falls, Frenchtown and Laurel. Butte Central also received attention.

Hamilton has reached the last two state championship games and looking to cash another possible trip into a championship, something that has been eluding the powerhouse Broncs. They lost to Billings Central last year, to Columbia Falls the year before in state Class A title tilts.

The Hamilton huddle features Montana’s marquee prep player coming into the season. Senior quarterback Carson Rostad was selected as the state’s Gatorade Player of the Year last fall and is a fourth-year starter at QB. The 6-foot-3, 215-pound Montana Grizzly commit is also an All-State safety, but as a quarterback, he passed for 2,794 yards last year and has 7,965 for his career. He threw 43 touchdowns and only six interceptions last year, noted Class A football historian Brian Reed.

“Without a doubt, they’re the No. 1 team in Class A in the preseason,” Don Peoples Jr., entering his 31st year as head coach of the Maroons, said. “They have the 2018 Gatorade Player of the Year and he is the best quarterback in Montana. This game will be a big challenge for us.”

“I think that our kids are looking forward to it, this challenge. I know they were disappointed last year at not making the playoffs. They’re working hard and accepting the challenge.”

The BC squad has a number of starters back. Some position switching has gone on this summer to better utilize the athletic talents offered. Butte Central has a college football commit of its own in 6-4-, 285-pound Montana State-bound lineman Aaron Richards, also a fourth-year starter.

“Our senior class has nine kids and they’re hard-working kids,” Peoples said. “Most have been in varsity athletics since they were freshmen. They’re all great kids.”
BC will counter Rostad’s quarterbacking with a threat of its own in senior Thomas McGree, who has played receiver and running back on offense in addition to backing up at QB during his Butte Central career. Though not having an optimal amount of time at quarterback, McGree has still passed for nearly 1,000 yards in his time as a Maroon, Peoples said. Plus, the senior has grown to 6-1, 190 pounds.

“Thomas has worked really hard at quarterback this spring and summer,” Peoples said. “And, he improved his speed as a long and triple jumper in track. I think he will be one of Montana’s better quarterbacks, too.”

Hamilton graduated several of its stars from the last couple of seasons, but replacements have likely been found.

“It’s been a great program for 20 years or so,” Peoples said, “ with coach (Bryce) Carver and coaches (Travis) Blome and (Steve) Weston. They’re always a well-coached team.”

Peoples agreed the likelihood is great that the Broncs are planning to throw the ball with Rostad at the controls. Tucker Jones, a 6-0, 210-pound senior is expected to the be prime receiver, though 5-8, 140-pound junior Jaiden Klemundt, a Missoula Loyola transfer, and 6-0, 185-pound junior Tyson Rostad are other pass-catching threats. Rostad is suspected of running extra routes for his brother in the family yard for a number of years. He is also the likely heir apparent to the QB role. Corvallis transfer Rory Jessop, a 5-10, 170-pound senior, figures into the mix as well. Jones had 44 catches last year while Jessop caught 35 for Corvallis. Another senior 5-7, 150-pound senior Landon Duce heads the run game, which advanced two 1,000-yard rushers through graduation last school year.

Cornerback Mason Murry, 5-7, 150 senior and another Corvallis transfer, takes over a key spot in the secondary while 6-0, 230-pound junior Carter Lake is a leader at linebacker, and top linemen include 6-4, 220 junior Tyler Burrows and 5-10, 220 senior Dylan Jessop.

The Broncs went undefeated in the Southwestern A Conference last year and 11-1 for the season, their only loss coming the state championship game.

This year, no Northwestern A or Southwestern A exist. The Western A is one 12-team conference, so every game the teams play will count in the standings. The top six at the end of the season will advance to the playoffs with the first- and second-place teams receiving first-round byes.

McGree is a third-year starter for Butte Central, mostly as receiver and in the secondary. He will be a multi-threat QB for the Maroons. Peoples acknowledged that the air game is living large in the Maroons’ playbook, too, with a stable of tall, athletic receivers.

The top returning receiver is 6-5, 210-pound senior tight end Matt Simkins, who has 42 catches for 874 yards, including eight touchdowns in his career, the Reed computations verified. The wideout rotation will be made up of 5-11, 170-pound seniors Luke Heaphy and Trevor Neumann, and 6-3, 195-pound senior Guido Ossello. Braden Harrington, a 6-2, 195-pound senior lines up at H-back.

The starting running back will be 5-11, 175-pound junior Egan Lester.

Starting in the offensive line are 5-7, 215-pound sophomore Eric Hart at center, 6-0, 200-pound junior Bryan Holland and 5-11, 220-pound junior Ian Williams at the guards, and Richards and 6-5, 210-pound senior Jared Simkins at the tackles. Jared Simkins moved into the line from receiver, but may still see time as a tight end.

Peoples said the defense will see the Simkins twins at the ends with Harrington, and then Richards and Williams at tackles in the rotation. The linebackers will be Holland, Ossello and Lester with a secondary consisting of 5-8, 160-pound sophomore Eyston Lakkala at strong safety, McGree at free safety, and Heaphy and Neumann at the corners.

Harrington is a returning all-conference punter while Heaphy and 5-10, 170-pound senior David Granell might share the kicking duties.

“We might’ve given Braden more practice than we wanted to last year,” Peoples joked about Harrington earning all-league honors as a punter.

Hart, Heaphy, Lakkala and Lester are the only new starters, all others tabbed have been starters in previous games, though maybe in different roles. Hart, Lester and Lakkala saw time last year on special teams and in reserve duty. Heaphy, a three-year starter, so far, in basketball, is out for football for the first time in his high school career.

“One of our real strengths,” Peoples said, “I think, will be our defensive line. We have a lot of experience there, and good size.”

Purpose and long memories might be other strong points for this year’s Maroons.

“We’re excited to be underway,” Peoples said. “Playing Hamilton is going to be a huge challenge, but we’re excited.”

“Our kids are hoping to be better than last year.”

Peoples is being assisted this year by his son, Danny, who is taking over offensive coordinator and quarterback coaching duties. Danny Peoples was the QB on the 2014 Maroons’ team that placed second in the state Class A playoffs. Also on staff are defensive coordinator Tom Peterson along with Scott Mansanti, Doug Peoples, Danny Mannix, Robin Moodry, Mike Hogart, Richie O’Brien and Tim Garrison.