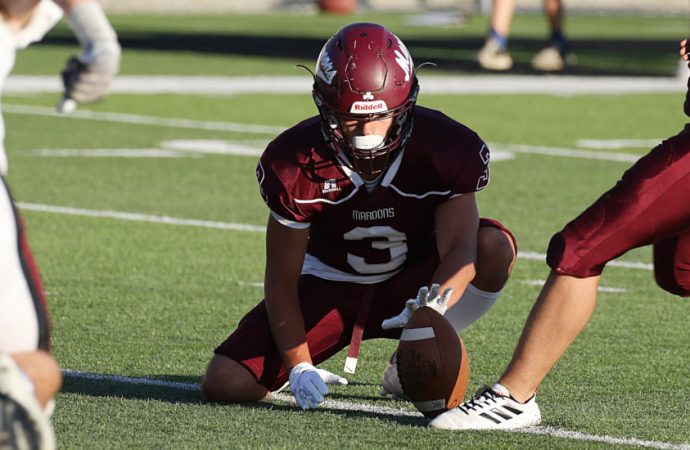 The meat of the schedule seems to be being served early to Butte Central this high school football season.

After playing competitively in a 49-26 loss to Class A top-ranked to begin the season last week, the Maroons will next tangle with third-ranked Frenchtown. The Western A Conference game is slated for a 7 p.m. start Friday in Frenchtown. (Radio: KOPR, 94.1 FM or online)


Frenchtown is 1-0 after outlasting Dillon 27-24 last Friday in their season-opener played in Dillon.

“Frenchtown has some outstanding athletes, a bunch of them returning from last year when it was one of the top teams in our league,” BC head coach Don Peoples Jr. said. “They’re a good football team. Both (Cade) Baker and (Jace) Klucewich return for them.”

The quick, nifty-handed Baker, a 6-foot, 150-pound senior, is a third-year starter at quarterback and masterfully directs the Broncs’ attack. Klucewich is one of the state’s standout players. A 5-10, 160-pound junior, Klucewich is also a third-year starter and shined in Frenchtown’s season-opening win over Dillon. He scored four touchdowns — two on runs, one on a pass reception and one on a punt return. He has lethal elusiveness. Klucewich carried 20 the ball for 112 yards in the opener.

The clutch, possession-type receiver guy is there, too, in third-year starter Hank Rugg, a 6-1, 215-pounder. All three stars also standout on defense with Baker and Klucewich in the secondary, and Rugg rushing the passer off an end.

“Baker takes them up and down the field and Klucewich is a dangerous player,” Peoples said. “They have good skill kids. They’re really athletic.”

Butte Central has a roster sporting some young men with similar description. A lot of the talk in Class A has been in how powerful Carson Rostad-led Hamilton is and the Broncs were spectacular in their win over the Maroons. However, the BC boys led first and also still hung four touchdowns on their side of the scoreboard before the final buzzer sounded.

Brian Reed, the Montana Class A historian, pointed out some Butte Central highlights from the game on social media this week. Included was senior quarterback Thomas McGree passing for 355 yards, fifth-most in school history and second only to Rostad in Class A opening weekend. McGree completed 20 of 35 attempts with three touchdowns and no interceptions. He passed to Guido Ossello for two TDs — of 20 and 72 yards — and 51 yards to Braden Harringston for one. Junior running back Egan Lester gave the Maroons a 7-0 lead with a short burst into the end zone to cap the first drive of the game.

Ossello’s seven catches for 154 yards ranked No. 2 in Class A, bettered only by the 12  catches for 165 yards turned in by Hamilton’s Jaiden Klemundt in the same game. Trevor Neumann also caught seven passes for BC.

“We have to do a good job of running the ball and scoring points,” Peoples said, noting that the more the ball is out of Baker’s and Klucewich’s hands, the better the chances are for victory for Butte Central. “We scored four touchdowns last weekend, but we left some off the scoreboard we should have had. Frenchtown is very strong, defensively, and has been for years. They’re very aggressive. They don’t give up a lot of points.

“I think Hamilton was very good and their quarterback was incredible. But, we did some good things, definitely. However, we did give up a few big plays. We need to get better on stopping those and that was a focus of our defense this week in practice.”

The coach also said improving the Maroons’ conditioning has been a concern this week. The team looked fatigued in the latter parts of both halves against Hamilton with so many players having to play both offense and defense due to being short on personnel depth at the time.

“We have to be in better football shape,” Peoples said. “We had a great start to that game and saw some things we’d like to build on. The kids were excited to get back on the football field.”

Two BC players suffered injuries that will keep them off the field this weekend. Two-way senior starter Jared Simkins is currently in concussion, protocol, Peoples said, and senior special-teams contributor Joseph Sehulster is out with a sprained ankle suffered while making a play on a kickoff.

The return status of either is not known at this time, Peoples said.

Simkins’ loss on the defensive line turns the area into a four-man group instead of a five-man rotation, Peoples said. Harrington and Simkins’ twin brother, Matt, will man the ends with Aaron Richards and Ian Williams at the tackles. Linebackers will be Bryan Holland, Ossello and Lester. Luke Heaphy and Neumann will man the corners with Eyston Lakkala at strong safety and McGree at free safety.

On offense, 5-9, 170-pound freshman Riley Gelling will step into Jared Simkins’ vacancy at offensive tackle. Richards will be at the other tackle with Holland and Williams at the guards, and Eric Hart at center. Matt Simkins is the tight end while Heaphy, Neumann and Ossello rotate through wideout spots. Harrington sets up at H-back, Lester at running back and McGree at quarterback.

“I think we’re really excited to get back on the field and to be a better football team this Friday night than we were last Friday night,” Peoples said. “(Frenchtown) is really tough at home and we hope to go play good football.”