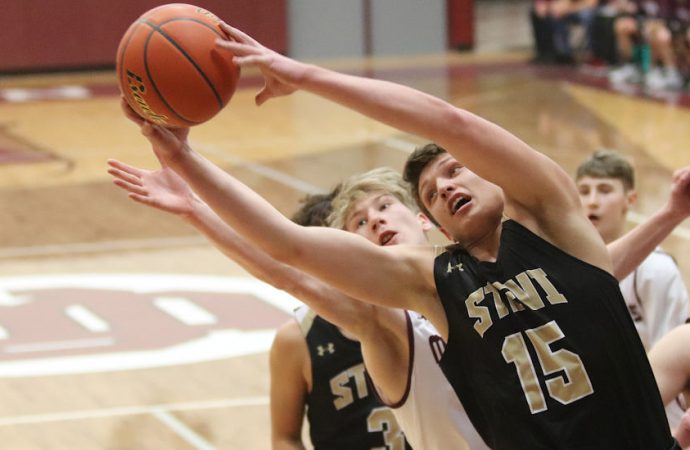 The fact that Stevensville entered Monday’s Western A Divisional play-in game without a win on the season did not make the Maroons feel comfortable.

Butte Central coach Brodie Kelly shot down any suggestions of studying the film of Ronan, the next team up for the Maroons should they win, before the game.

“I was antsy all day,” Kelly said. “I’d rather tip these games off at 8 in the morning.”

Kelly’s Maroons took away most of those fears with a fast start Monday night at the Maroon Activities Center. They erased all doubt with a 22-2 third quarter, and BC advanced to the divisional tournament with a 72-23 victory.

The win was BC’s third of the season over the Yellowjackets, but the second one was a little too close for comfort, at least early on. That reinforced Kelly’s do-or-die approach to his players.

“When we played those guys last time, it was a four-point game at the half,” Kelly said. “There was zero chance we were going to overlook anybody today.”

Central will open the tournament against Ronan at 4 p.m. Thursday at the Butte Civic Center, and Kelly can finally study film of coach D.J. Fish’s Chiefs.

“That’s what I’m doing when I get home tonight,” Kelly said.

The BC coach gets to watch that film because his Maroons put together an outstanding team performance.

Dougie Peoples took a pass from Bryson Sestrich and sank a 3-poniter 20 seconds into the game, and the Maroons never trailed. BC scored the first seven points and jumped out to a 12-0 lead.

The Maroons lead 33-14 at halftime, and 11 of BC’s 14 field goals came off of assists. Central’s first 10 buckets were assisted.

“That was kind of the way we played on Friday, too,” Kelly said of a win over the Broncs that secured the Maroons the home play-in game. “We had a lot of points off of assists. We’re sharing the ball well. It’s finding good rhythm, ball movement and flow in the offense.”

On the night, the Maroons registered 18 assists. Sestrich led the way with five, while Kyle Holter and Drew Badovinac each dropped four dimes.

Even with a 19-point edge at the break, Kelly did not feel quite comfortable. Without subvarsity players watch, few fans watched the game, and the gym was quiet. Kelly said his team was not quite firing with enough emotion.

In the third quarter, that all changed.

Sestrich sank a three 10 seconds into the half to get things started. Gracen Trevino of Stevensville answered by driving for a hoop.

Holter scored the next time down court, and this time the Yellowjackets had no answer. BC scored 19 straight points to close the quarter, taking a 55-16 lead into the fourth quarter.

Central emptied its bench, finishing the game with mostly reserves.

BC’s three top scores did all of their damage through the first three quarters.

All 11 Central players to hit the floor scored points in the win with Holter scoring eight. Joseph Sehulster hit a 3-pointer and scored seven points in the fourth quarter.

BC also got five points from Egan Lester, four from Konnor Pochervina and Isaac Sholey, three from Badovinac and two apiece from George Riojas and Rye Doherty.

Kellan Beller paced the Yellowjackets with 11 points. Stevi also got five from Trevino, fur from Pierre Rottini, two from Hunter Gum and one from Cole Olson.

The win was BC’s sixth in their last seven games, and the Maroons will take 10-6 overall record into divisionals.