The Western A Conference test, set for a 7 p.m. kickoff in Whitefish, will be Butte Central’s first road trip of the season. The Maroons opened their season with a 49-14 loss to Polson then bounced back to beat Browning 51-12 last Friday. Whitefish started with a 26-9 defeat at the hands of Dillon, then overtook Frenchtown 24-13.

The BC boys had to overcome a couple of injuries to post their win over Browning. Senior linebacker/running back Konnor Pochervina missed with a sprained ankle and junior lineman Canyon Kibler suffered a leg injury, that benched him for the remainder of the contest. Backups performed well. Senior Kyle Holter switched over to running back from wide receiver and gained 154 yards, scoring two touchdowns. Junior Bryce Keane filled in for Pochervina at linebacker and drew praise from head coach Don Peoples Jr. Junior Ayden Durkin, senior Josiah McGee and sophomore Michael Peck filled in on the line capably.

Head coach Don Peoples Jr. said Pochervina is back in the lineup this week, but that, unfortunately, Kibler suffered a season-ending knee injury.

“We’re really disappointed for Canyon,” the coach said. “He was playing good football for us. It was a non-contact injury. The worst part of sports is the injuries.”

Durkin will start in Kibler’s spot at center and Peck will take his place on the defensive line.

“Michael didn’t play last year, but has been working hard every day,” Peoples said. “He weighs 280 pounds and has excellent potential.”

Junior quarterback Jack Keeley continued to improve and tossed two touchdown passes to Dougie Peoples and one each to Rye Doherty, Eric Loos and Zane Moodry in last weekend’s win. Butte Central totaled 342 yards in offense. The Maroon defense recovered three fumbles, two by Moodry, and held Browning to 151 yards of offense – only 57 of which were given up through the air.

Whitefish got behind Frenchtown 13-0 before racing past the Broncs to pull out the win in Frenchtown with 24 straight points.

Kelch is also the team’s kicker and booted a 27-yard field goal in the win. He also picked off a pass on defense, as did teammate Jesse Burrough. “We think they are a very good football team.”

“Flynn Ridgeway is a very good football player, an outstanding quarterback,” coach Peoples said. “He is efficient passing the ball and took over the second half against Frenchtown by running the ball. They got the momentum in the second half and really played well.”

Both teams seem to have the abilities on offense to grind out long possessions, and to be explosive burning downfield, particularly in the passing game.

Breaking off big runs is always in the mix of possibilities, too.

The Maroons will be back in Butte next Friday to celebrate homecoming with a game against reigning state Class A champion Hamilton. 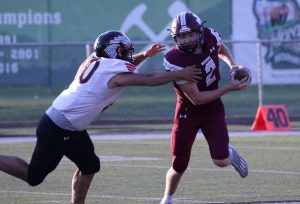