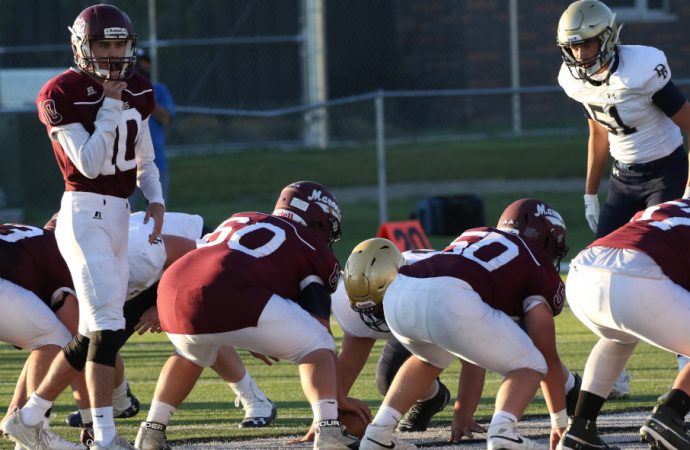 Butte Central quarterback Drew Badovinac looks to the sideline for a call Friday at home against Dillon. (Shelly Davis photo)

Butte Central will be in Corvallis for what has to be considered a must-win football game Friday night.

Or, maybe it will be Saturday night. We don’t really know yet.

The air quality in the Bitterroot Valley has been even worse than in Butte because of the wildfires, and Hamilton, Corvallis and Stevensville will make a collective decision at 12:15 p.m. Friday on whether to play their home games Friday.

If not 7 p.m. Friday, the games will be moved to Saturday night, when the cooler, wetter forecast bodes better for air quality.

Either way, Peoples said his Maroons are ready to play after a week that has seen the team move inside and outside depending on the air report.

Whenever the game is played, it will be carried live on KOPR. (Radio: 94.1 FM, online at kopr94.net or on the KORP app.)

The Maroons have to be ready to go. At 0-3 (with one loss coming from forfeit), BC absolutely needs a win if it plans to get back in the playoff race.

“We have to win to stay alive,” Peoples said. “The kids know that. It’s our first game on the road. It will be a challenge.”

Corvallis is also in must-win mode. The Blue Devils enter the season at 1-2. Corvallis went on the road to beat Stevensville 19-7 in the season opener. After falling 53-6 at home to Hamilton, the Broncs fell 37-6 at Frenchtown.

“They’re a solid football team,” Peoples said. “They’ve got great size. They ran an unorthodox defense where they have guys all over the place. They try to confuse with different fronts.

“We’re concerned about their size. They’re quarterback can throw the ball well.”

Senior Bryce Mann has passed for 254 yards on the season. He’s tossed a touchdown pass and been picked off five times. Ten different Blue Devils have carried the ball this season, and senior Clay Barcus leads the team with 24 total tackles.

The Maroons are coming off last week’s 41-0 loss at home.

Senior running back Egan Lester had a big performance against the Beavers. He ran for 123 yards on 23 carries behind an offensive line made up of Eric Hart, John Crossman, John Fisher, Brian Holland and Ian Williams. Tight ends Ty Driscoll and Luke Garrison also help up front.

Junior Gage Guldseth is also a weapon for the BC passing attack.

Defensively, the Maroons have a bunch of linemen to rotate up front, including Hart, Williams, Fisher, Driscoll, Riley Gelling and Kaeden Kibler.

Garrison, Pochervina and Lakkala play linebacker while Badovinac, Peoples, Lester and Rye Doherty will start in the secondary.

Pochervina handles punting duties, while Joseph Sholey has taken over as BC’s kicker.

Next week, the Maroons are back at home to take on Stevensville in what they expect to be another must-win game.