Butte Central had the celebration first, then another party.

The Maroons unfurled their 2022 state Class A high school boys’ basketball banner and hung on the wall before belting next-door rival Anaconda 73-28 Thursday night in a non-conference game at the Maroon Activities Center (MAC).

A pregame ceremony was held to put the banner in its place on the south wall. Graduated members of last year’s team participated along with the current Maroons. A large crowd viewed and cheered the ceremonies. Video clips from the season, including Dougie Peoples’ buzzer-beating 3-point basket that lifted Butte Central past Lewistown in the state title game in Missoula. 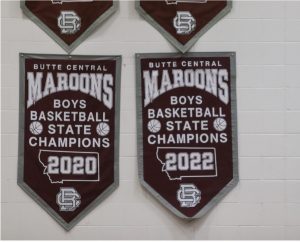 Peoples was still draining 3-balls after the ceremony. He dropped six of them in against Anaconda while scoring 27 points. As a team, BC netted 10 treys.

“It was a really great event,” Butte Central head coach Brodie Kelly said. “For the players that were on last year’s team, this was the night they’d been looking toward. They wanted to see the banner go up where it belongs.”

It is the Maroons’ seventh state boys’ basketball title and 11th in state hoops with the BC girls having hung four such banners over the years.

“I do think (the celebration pushed us out the door from the locker room),” Kelly responded to if the event inspired the Maroons for the game. “It felt like it did with the way the game started.”

Making their shots, rebounding and playing defense at highest intensity, the BC boys stormed to a 14-0 advantage to begin the contest. Peoples netted the first three points with his first trey and then hit another two minutes later after Kyle Holter caged a pair of free throws. Holter hit two more foul shots after Peoples’ second 3-ball and Eric Loos powered his way to the basket for a layup and a 12-0 cushion. Jack Keeley came off the bench to cap the run with a layup.

Gabe Galle shot in a 3-pointer for the Copperheads, ending Butte Central’s first streak at 2 minutes, 15 seconds of the first quarter. It proved to be only an interruption. The Maroons scored the last six points of the quarter and led 20-3 when the period ended. Two baskets by Loos and one by Peoples finished the frame.

Zane Moodry drove for a basket at the start of the second quarter as BC began a 21-4 run that widened the gap to 41-7. Peoples scored eight of BC’s 21 points in the frame, and Owen McPartland provided spark, too, with a 3-point make and 15-foot pullup jumper.

By halftime, Butte Central led 41-12 after Class B member Anaconda closed out the half with a 3-pointer from 6-foot-5 junior River Hurley and drive-for-layin by Galle.

The Maroons broke it open even more by ending the third period on a 16-0 run, taking the score to 62-16 and putting the game in continued clock mode, which is a result of a 35-point difference between teams in the game.

Kelly lauded the play of 6-4 senior post Eric Loos and said being able to let so many BC players see time ono the court were among game highlights.

Loos scored 11 points and pulled down six rebounds, and was key in the offense with his inside passing, the coach said.

“We don’t say enough about what Eric does for us,” Kelly said. “Eric Loos was amazing tonight. With his passing and his defense and his decision-making, he opens up so many scoring opportunities for us. He kept a lot of possessions alive for us.”

Ten players saw action for the Maroons against a Copperhead team that seemed shocked by BC’s early surge, and never recovered from it.

“We were able to focus on our possessions and work on our fundamentals,” Kelly said about owning the 41-12 commanding lead at halftime. “I think we maybe (stunned them) with our big start and they’re a better team than how they played tonight.”

The loss put the Copperheads at 3-4 for the season. Butte Central is 6-1 and Thursday’s win was the Maroons’ sixth in a row. They will play at Stevensville on Saturday in a return to Southwestern A Conference action.