Maroons finally at home to take on Browning 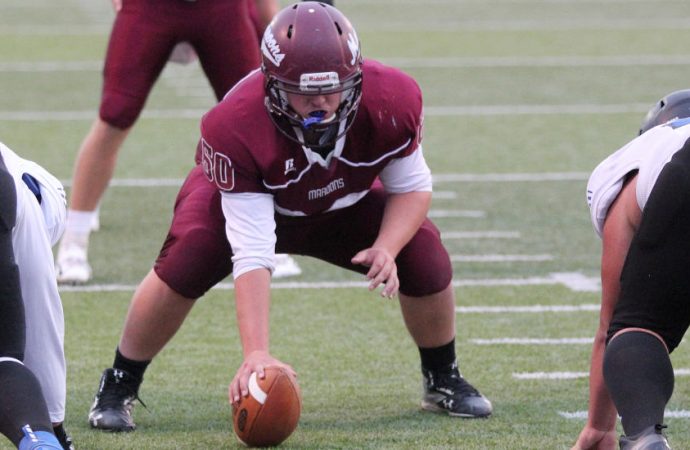 Butte Central will be making one of its rare home football appearances this season on Friday and the opponent will be a Browning team that has gained some positive notices recently.

The Maroons played five of their last six games on the road after opening the season at home and have compiled a 2-4 record. Browning is also 2-4 with wins over Ronan and Columbia Falls. The Indians are coming off a 41-0 loss to Dillon.

“They’re really dangerous,” Butte Central head coach Don Peoples Jr. said about the Browning talents. “At Columbia Falls, they were down 26-8 in the fourth quarter and won, 32-26. They have good team speed and they’re good upfront.”

Ansel Traynor is in his first season as the Indians’ head coach and has gotten good offensive leadership from 5-foot-7, 170-pound sophomore quarterback Jesse Carlson, a good passer who can take off and pick up yardage on the ground, too.

“Browning’s about 50-50, run and pass,” Peoples said of the Indians’ offense. “They run the ball effectively with good speed in the backfield. The quarterback throws the ball well. They have tall receivers and they have faster ones, too. They have a lot of tools.”

Butte Central lost 29-21 at Libby last weekend with a couple of big plays given up turning out to be the difference, Peoples said. Libby is undefeated and had a 29-7 advantage going into the last quarter before weathering a Maroons’ comeback.

“We felt like we gave Libby a couple of big plays in the first half, but other than that, played a good football game,” Peoples said. “We have to find a way to win games and finish games.”

He said BC needs to win the next two games to secure a spot in the postseason playoffs.

Injuries have dragged on Butte Central some this year and Peoples said the status of senior tight end/defensive end Matt Simkins is unknown for Friday’s game after being sidelined much of the Libby game with back spasms.

Senior quarterback Thomas McGree has been having a banner year despite playing most of it with a break of his non-throwing hand. Senior Guido Ossello has been the leading Class A while seniors Trevor Neumann and Luke Heaphy have been good pass-catchers, as well.

Junior Egan Lester has been the main ball carrier in the running game with sophomore Eyston Lakkala and senior Braden Harrington operating out of the H-back spot. Harrington returns to the lineup this week, Peoples said, after missing two-plus games with a concussion. Montana State signee Aaron Richards anchors the offensive line at a tackle spot while juniors Ian Williams and Bryan Holland have been solid at the guards, and sophomore Eric Hart dependable at center. Junior Ty Driscoll and freshman Riley Gelling have been filling the other tackle spot well since the loss for the season of senior Jared Simkins to injury.

Simkins, Harrington, Williams, Driscoll and Hart will rotate through spots on the defensive line and the unit has been a strength for BC this year. Holland patrols at middle linebacker while Lakkala, Lester, McGree, Ossello, Heaphy and Neumann scramble in the defensive backfield at linebacker positions and in the secondary.

Senior David Granell is the kicker and Harrington the punter. Heaphy is also capable in the roles.

“We have Braden Harrington back we’re excited about that,” Peoples said. “We need to win to keep our season alive.”