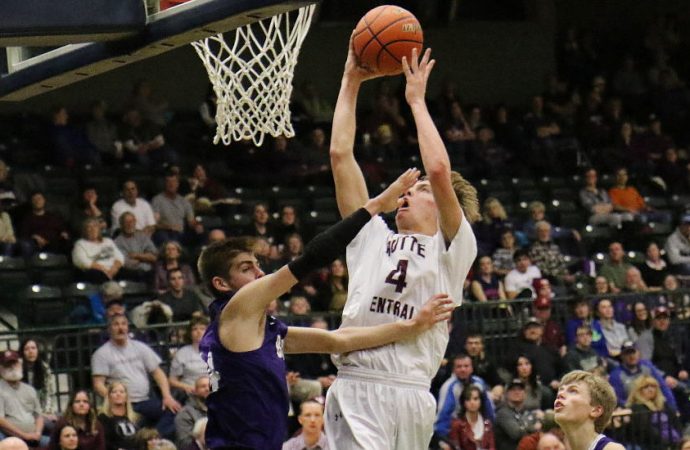 As expected, Thursday night’s Butte High-Butte Central boys’ basketball series renewal was a physically rugged, spirited contest in the Butte Civic Center. Butte Central won by a 57-39 margin, using a tourniquet of a defense in the third quarter to stymie the Bulldogs.

The 20-4 spree that was interrupted only once by a Butte High field goal took the Maroons from a 24-17 halftime lead to a 44-21 command.

“A lot of really big plays were made by a lot of individuals,” BC head coach Brodie Kelly said. “I’ve always said this game is more for the players than it is for the coaches.

“(Dan) McCloskey started out huge for us in the third quarter, Cade Holter — I just love the way he plays — gritty and gets us steals. Luke Heaphy had a lot of good plays and he was really focused and confident to start the game. Dylan Sestrich did some great things, and Matt (Simkins), Aaron (Richards) and Jared (Simkins) gave us great presence on the inside.”
Butte High led the earliest before being scorched but an otherwise hot start for Butte Central. The opening tip wound up in Kale McCarthy’s hands and he drove for the layup and a 2-0 Bulldog edge three seconds into the contest.

BC responded with seven consecutive points — Holter on a drive to the hoop, McCloskey on a free throw and a basket off a Heaphy feed, and Richards on a layup assisted by Matt Simkins’ inside pass.

The quarter ended with Butte Central up  by 12-7, Tommy Mellott’s three-point play for Butte High being the last points of the frame.

“The bottom line is we’re not a team who can go and get things under the basket,” Luke Powers, head coach of the Bulldogs, said. “We have to get penetration. And, we have to shoot the ball. Two-for-23 tonight from 3-point (range) was the story of the game. Eight-for-23 would’ve been a different game.”
The only senior on either roster was Butte High’s Lathan Ricketts, who logged some quality minutes off of the bench. The Maroons, though, held the decisive height advantage and used it to clog the key while dominating the boards,  40-19.

“Credit Butte Central,” Powers said. “They played a packed man-to-man defense and they did it well. It’s like a zone, it’s packed in so tight. We couldn’t get the ball in the basket and that was the story of the game.”

Butte High did, though, lurk for the first half. It was a four-point difference, 16-12, after McCarthy canned a 3-pointer and before the Maroons rolled out a 5-1 run capped by a Heaphy trey.

The halftime 24-17 margin, however, turned out to be the last good look the Bulldogs got at BC.

McCloskey scored off a pass from Holter and then drained a 3-pointer as the Butte Central lead reached double figures. Clay Ferguson netted two free throws for the Bulldogs, but the Maroons then scorched the strings for nine straight points. Heaphy and Dylan Sestrich gunned in 3-pointers to fuel the run.

Butte High’s only field goal of the period came with 1 minute, 1 second left in it on a mid-range jumper by Trevyn Roth. McCloskey answered it with a basket-and-one and when the quarter ended, BC owned a 44-21 cushion.

“In the third quarter, we were just trying to contain them on the dribble,” Kelly said after the non-conference game. “Their shots were coming on penetration. They had five guards out there and it was hard to stay in front of them.”

The teams mixed and matches starters and substitutes in the fourth quarter after Butte High was unable to gain ground on its rival.

The win was Class A Butte Central’s first after three straight losses to Class AA Butte High in the annual series.  McCloskey finished with 19 points to lead the Class A Maroons and was backed by 10 points each from Heaphy and Sestrich. Matt Simkins pulled down 11 rebounds and scored four points. Richards had eight points and six rebounds, Holter finished with four points and Braden Harrington tallied two. Jared Simkins and Trevor Neumann also played.

“This game is most meaningful to the players,” said Kelly, who has coached the Maroons for 14 years and played for them in high school. “Butte High really played their tails off tonight. I really like those guys — they’re ones I’ve had in my camps and stuff.”

The win gave BC an 8-1 record going into Saturday’s home Southwestern A Conference game with Corvallis.

“That third quarter, we just go to pressing too much,” Powers said. “I called timeouts to try to get something going for us, get our guys a layup. I have to go back to the well myself now and find something for us. Every time we play, the other team will be bigger than us. So, that can’t be an excuse. We have to shoot the ball. Of those 23 3-point shots we took tonight, only three were bad shots. We have to make them.”

The Bulldogs will next play at Billings West on January 19  in a return to Eastern AA Conference action.

Butte High has a 1-6 season record.

The Butte High-Butte Central series now stands at 98-77-1 in the Bulldogs’ favor.