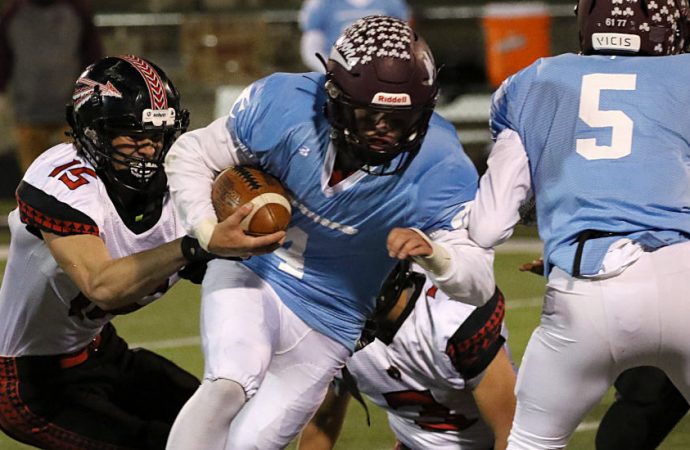 We all see. David Granell’s 25-yard field goal toward the end of the third quarter was the exclamation point to the statement as the Maroons scorched Browning 42-6 Friday night.

Granell’s kick made established the final score and kicked the clock into steady-run on the 35-point difference rule as BC roared to victory wearing symbolic Immaculate Conception (I.C.) Grade School powder blue uniforms. The grade school has been closed for 50 years, but alumni were honored on the field prior to the kickoff.

The Western A Conference clash was held on the Bob Green Field at Montana Tech.

Quarterback Thomas McGree passed for five touchdowns, Guido Ossello caught three of them, Egan Lester carried the ball for 128 yards, including a 15-yard TD, and the defense took the ball away from Browning eight times.

It was the complete game Butte Central needed with its back to the wall in terms of postseason qualification. The Maroons, now 3-4 for the season, must win at home against Polson next Friday night.

“This was a great win for our kids,” BC head coach Don Peoples Jr. said. “I was really happy with our offense. We hurt ourselves a little late in the second half with penalties, but the offense had a good game. Egan Lester had his best game running the ball. Tom had his great output and the receivers did a great job of getting the ball.”

Peoples noted that the Maroons forced a few more players into duty this week due to injuries before and during the game. Braden Harrington returned to the lineup after a couple of weeks off in concussion protocol. However, senior receiver/cornerback Luke Heaphy injured a shoulder in practice Wednesday and sat out of the contest. So, Badovinac, a sophomore, played in secondary in his place and Harrington was at receiver while Eyston Lakkala stayed at H-back where he had been filling in for Harrington. Sophomore Luke Garrison saw action at linebacker after Bryan Holland came up limping and was relegated to playing only on the offensive line.

“It was Drew Badovinac’s first start and he played very well,” Peoples said. “Luke Garrison filled in on defense in the second half. It was great to have Braden back.”

Harrington and Lakkala each caught a touchdown pass.

The opportunistic defense blew up many chances Browning had given itself with its dangerous receivers and runners, with strong-armed sophomore quarterback Jessie Carlson dealing them the ball. Turnovers stopped eight Indians’ possessions.

“Browning has been throwing the ball on everybody this year,” Peoples said. “Our guys did a great job on pass coverage and we were able to get some pressure on their quarterback, which I think really helped.”

The Indians unveiled their explosiveness with a 77-yard pass play from Carlson to Justin Anderson down the middle of the field in the second quarter. Carlson caught the ball behind the defensive line and outran the defense to the end zone.

“I knew coming in that they were going to throw it a lot,” Ossello said. “We knew when they got behind 20 points they would be throwing the ball.”

Ossello caught seven passes total on the night. He grabbed two from McGree for 112 yards, including the TDs of 31, 57 and 6 yards, and he stole the other two from Carlson. Ossello deflected the credit to everyone else.

“We were banged up at cornerback tonight and Drew Badovinac came in and played really well,” he said, “and on offense, everything we get is because of the offensive line.”

Well, he said, the quarterback and the coaches have a bit to do with it, too.

“I got open because of the schemes we ran tonight,” he said. “Danny (offensive coordinator Danny Peoples) did a good job calling the plays. How we played tonight on offense comes from Thomas and the line.”

The Maroons had the ball first and scored on the opening possession, capping the 79-yard drive with McGree’s flip to Lakkala for the 11-yard touchdown. It was 20-0 before the first quarter was over with Ossello scoring on the 31- and 57-yard aerial hookups with McGree.

McGree hit Harrington for a 25-yard scoring play on the first snap of the second quarter and the lead grew to 33-0 when McGree connected with Ossello on a 6-yarder, their third TD connection of the half.

Browning immediately tamped down the Maroons’ celebration with the Carlson-to-Anderson long-distance strike and the Butte Central advantage was 33-6 at halftime.

Carlson passed for 246 yards, but was picked off five times. The other interception came after Carlson was shaken up for a play and Riley Spoonhunter’s throw downfield was swiped by Neumann. As a receiver, Spoonhunter was the game leader with 114 yards on five receptions. The Indians were held to 31 yards on the ground and to seven first downs for the whole game.

Aaron Richards, Holland, Williams, Eric Hart, Ty Driscoll and Riley Gelling along with tight end Matt Simkins played in the offensive line that the head coach and Ossello raved about after the game.

“I’d like to commend our coaches for getting the kids ready to go this weekend,” Don Peoples Jr. said, “on offense and defense.”

“We have Polson next week and we have to win to stay alive. We’ll get the kids healthy and ready to go next week.”

The loss dropped Browning to 2-5 for the season.