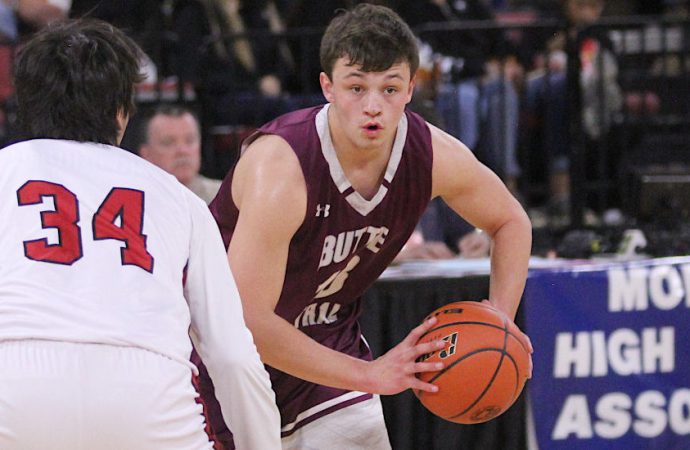 Note: This story was completed before the Montana High School Association canceled the remainder of the tournament.

BILLINGS — Trevor Neumann has been in this situation before.

He was very much a part of a Butte Central basketball team that played for the state championship.

“I had my face painted and everything,” Neumann said Friday night after Butte Central beat Browning 66-50 in the semifinals of the Class A State boys’ basketball tournament at The Metra. Stats

The thing is, Neumann was 6 the last time Central got this far. He was the Maroons’ unofficial team mascot as he cheered on his brother Tanner in the 2008 state championship game against Browning.

Saturday night, in the same arena that his brother played on 12 years earlier, the younger Neumann will take the court for the Maroons, who look to take one step further than his brother’s runner-up squad.

With the state championship hanging in the balance, the Maroons will play undefeated Hardin at 6:30.

In Friday’s semifinal, Neumann played like a man who believed he was destined to follow in his brother’s footsteps. 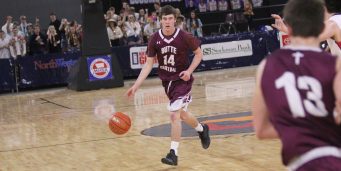 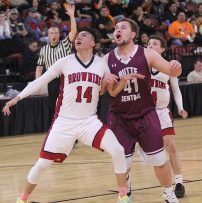 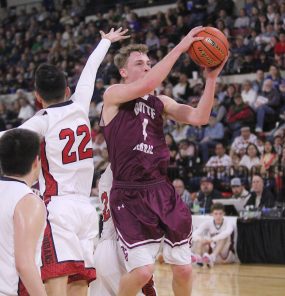 Matt Simkins of BC goes up for a shot as Browning’s Chris Reevis gets a hand up. (Bill Foley photo) 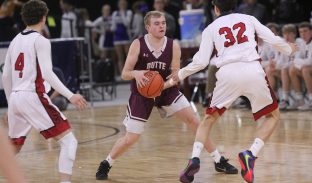 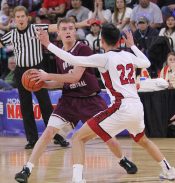 Neumann scored 10 points, grabbed four rebounds and dished out three assists. Then he did so many things that do not show up on the state sheet.

“He made some really big plays for us,” Central head coach Brodie Kelly said. “He made some steals in transition and came up with some loose balls for us.”

Neumann, whose brother Tanner is on the BC coaching staff, had a pretty simple explanation.

“I just went out there and gave it my all because I knew it could be my last chance to be able to actually make it to championship game,” the younger Neumann said.

Picking out one star for the BC win, though, is impossible.

Aaron Richards came off the bench to put in a shift, and Ryan Wahl, Egan Lester, Thomas McGree and Kyle Holter played out the clock when the win was in hand.

If you poll the Butte Central student section, the star of the game was senior Jared Simkins.

That’s because he took a pass from Harrington and threw down a contested, one-handed dunk late in the third quarter.

That jam put the Maroons up 47-35 heading into the fourth quarter.

“It was pretty amazing,” he said of hearing his name that way. “It was surreal.”

Jared Simkins, though, said he wasn’t even the best player in his family in that game.

“I thought he played a lot better than me,” Jared Simkins said of his twin brother, Matt. “I just had the one play.”

That “one play,” was the first game dunk in Jared Simkins’ career, and nobody saw it coming.

“We were all shocked. That was amazing,” Neumann said.

“I was super excited to see the dunk and shocked at the same time,” Kelly said. “They all were. None of has seen him dunk like that before. I think some adrenaline explains that.”

Jared Simkins was among the shocked.

“I was just as surprised as everyone else was,” he said.

Like in Thursday’s opening-round win over Billings Central, the Maroons had to come from behind.

Browning jumped out to a 16-9 lead, and the Indians took a 20-14 advantage into the second quarter.

The Indians led 27-19 when Browning star Riley Spoonhunter sank a deep 3-pointer with 4 minutes, 5 seconds left in the second.

Browning celebrated as they went to the bench following a timeout they called before the Maroons could inbound the ball.

That was the last time Browning had something to celebrate.

Harrington scored on a put back that started a 12-1 run to close out the first half, and the Maroons rolled into halftime leading 31-29.

Matt Simkins scored 11 points in the second quarter, seven of which came in that 12-1 run.

“Matt Simkins was absolutely unbelievable again,” Kelly said. “He’s been so good in these games that are must have. He just plays with so much intensity and so much intelligence. Everyone is wowed by what they see. Then there are so many things that people don’t understand that he does.”

A Harrington bucket and two Jared Simkins free throws made it a 35-28 game to open the third quarter.

Spoonhunter followed a Blayne DeRoch bucket with a 3-pointer to cut the lead to 35-33.

After that, the Maroons simply took over.

Harrington went up for a shot that was contested. He changed his mind in midair, opting instead to feed Jared Simkins with a perfect assist.

That started a 12-2 run to end the third quarter to extend he lead to 12 points. Jared Simkins’ surprise ended the run and the Indian’s state title hopes.

The Maroons hit 11 of 12 free throws in the fourth quarter to end any idea of a Browning comeback.

“I’m just super happy for these boys because they deserve it so much,” Kelly said of the Maroons advancing to their first title game in 12 years. “They put so much into their high school careers, this season, and especially these last two weeks. I’m super proud of them.”

Kelly, who was part of BC’s 1992 team that captured the state title in The Metra, was more concerned with his players first title game appearance than he was his third as a coach.

“For these guys, I’m just super excited,” Kelly said. “We’ve been in this game two previous times. We came up short. I’m just thrilled for them to get over the hump.”

On top of their 32 total points, the Simkins twins also combined to grabbed a total of 17 rebounds to help the Maroons win the battle of the glass 37-27.

Led by the great Famous Lefthand, Hardin enters the title tilt at 23-0. The Bulldogs, who won the 2018 title, will be making their third straight appearance in the title game.

Neumann, again, had a simple explanation of what the Maroons need to do.

“We’ve just got to do the same thing,” he said. “We’ve got to go out there and give it our all. We’ll have a great shot.”