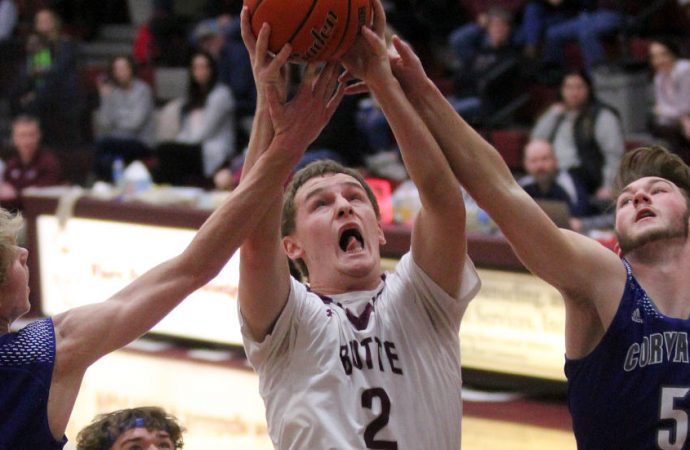 After surviving a scare in Three Forks Thursday night, the undefeated Maroons were challenged again on Saturday before pulling out a 51-46 Southwestern A Conference win over Corvallis at the Maroon Activities Center.

Gator Yelenich sank six free throws in the last minute after Trevor Neumann hit two important shots that gave BC back a late lead it had yielded.

The Blue Devils had scorched a 7-0 run for a 41-39 edge with 3 minutes, 41 seconds left in the game. It was Corvallis’ only lead. Caleb Warnken’s two free throws broke the 39-all tie.

Neumann had missed four 3-point attempts in the quarter, but then scored on a nifty drive to re-tie the count. He raced back downcourt on the next possession to score on a follow of a fast-break missed shot, and Butte Central had the lead for good.

Braden Harrington took a pretty pass from Matt Simkins to the hole after Simkins had stolen a Corvallis pass. The edge was widened to 45-43 with 1 minute, 51 seconds left on clock.

Yelenich went unintentional decoy for the Maroons on the Blue Devils at the next opportunity He missed the front end of a one-and-one and Trexler rebounded. Warnken scored on a floater to bring Corvallis back to within a basket of the lead.

Since Yelenich had missed his last foul shot, the Blue Devils decided to pick on him to try to gain ball possession and slow down time.

Luke Wolsky fouled him first and Yelenich calmly caged both charity tosses. However, he fouled Tanner Jessop, who then matched him from the foul line on the other end. Jessop, in turn, fouled Yelenich and, again, the BC senior showed his poise by sticking both freebie through the cylinder.

Corvallis was determined its strategy might work. Yelenich picked off a pass and drew a foiul from Jessop, the Blue Devil’s fifth. Again, Yelenich made good on both free throws and Butte Central had a 51-45 advantage with only 12 seconds left.

“Gator Yelenich making those free throws was huge,” Butte Central head coach Brodie Kelly said. “It took a lot of guts after missing that front end. He stepped up and made the shots.

“Trevor Neumann, too. When you’re finding it hard to make shots, it’s pretty tough. He did it at the end and did a nice job. Both showed a lot of poise.”

The Maroons won for the 11th time this season and have a 13-game win streak dating back to last year’s state Class A tournament.

They looked as though this win would come easier than it did.

Ryan Wahl left the bench to sink a 3-pointer and break a 6-all tie with 2:40 to go in the first quarter, and Matt Simkins finished the period with a basket off a pass from Brian Holland and then a free throw after being fouled at the buzzer.

A Jessop 3-pointer pulled Corvallis to within 20-17 at 3:15 of the second quarter before Butte Central got a basket from Matt Simkins and free throws from Harrington and Wahl for a 24-17 halftime lead.

The Blue Devils whittled five points off the margin by end of the third frame, lessening BC’s lead to 36-29 going into the fourth quarter.

“Give Corvallis credit,” Kelly said. “They play hard and they play well. We were a little bit lethargic on our part. But, it’s a game we can certainly take some lessons from. We have to do a better job of running through picks and in the physicality.”

Collisions were frequent in the physical-styled game. One player fouled out and eight more finished with three or more fouls on their register.

“Thankfully, we had some depth,” Kelly said. “Thomas (McGree) helped us out tonight. He’s a super athlete, who rebounds and plays hard.”

Harrington led Butte Central in scoring with 14 points and Matt Simkins put in 11. Yelenich wound up with eight points, Jared Simkins and Neumann six apiece, Wahl four and Holland two. Luke Heaphy and McGree also contributed. Usual starter Aaron Richards did not play. Kelly said it was not because of any discipline or health issues, but said he didn’t want to elaborate.

Jessop scored 19 points for Corvallis before fouling out, and Warnken hooped 13. Trexler was next-high with six. The Blue Devils are 1-3 in conference play and 5-4 for the season.

The BC boys went to 5-0 in Southwestern A play in their 11-0 overall record. They will play at Stevensville Friday and Frenchtown next Saturday in league contests.