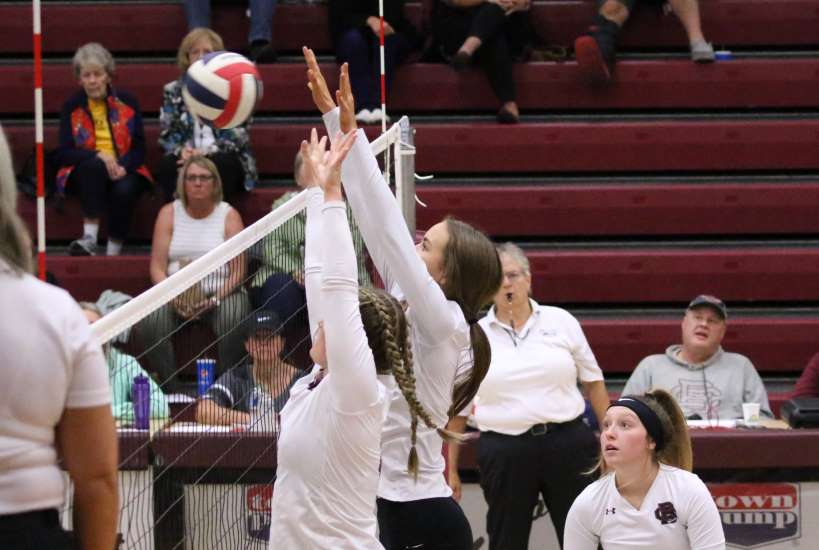 The Butte Central Maroons had a big homecoming night at the MAC in front of a raucous student cheering section. They swept the Blue Devils in three sets (25-19, 25-21 and 25-22) and sent Corvallis home without a victory.

The evening started with the large home crowd joining in the singing of the National Anthem,  as there were some technical difficulties.  That energy flowed into the first play of the game. Brooke Badovinac crushed the ball over the net for the first point.

After that, the pace slowed and the Maroons fell behind. Coach Becky Hancock called a timeout as her team was down 3-7 and gave the girls a good pep talk.  The team came out of the break amped up and rallied behind ace-server and defensive specialist #1 Maycee Anderson. Anderson’s strong serving pulled the team ahead 13-9.  Corvallis never regained the lead.  The Blue Devils tried to stop the momentum with a time out at 15-10, but #8 power hitter Ella Moodry hammered a kill shot from the second row immediately after the break.  BC was able to finish the set with a win 25-19.

As the smoke settled from the first set, the Maroons were a little complacent. They started with a 0-4 deficit in the second set.  Front row hitter,Lucy Kelly, slammed a spike for the Maroons’ first point of the set. The teams traded serving and hitting errors and BC clawed back to a 7-7 tie.  Setter Mia Keeley did a great job putting the sets on the net for her front row. Strong hitting from Badovinac, Moodry and Mollie Drew helped the team gain the edge. Great defense from Anderson kept the Blue Devils from putting down points.  Mollie Drew placed the finishing kill of the set to win 25-21.

The start of the third set seemed to mimic the second as the Maroons allowed Corvallis to take an early 4-0 lead.  BC came back on fire as they pounded hit after hit. Drew, Moodry, Badovinac, and Jaeden Berger really put on a show to gain the lead.  Corvallis coaches took a timeout to settle their team with the score at 7-5.  Shortly after the timeout, Badovinac put up a solo block for point.  The teams exchanged a few very tough volleys. The Blue Devils were eventually able to claw out a tie at 22.  A couple well placed shots from BC forced Corvallis to take a final timeout at 24-22, but the strategic break did not stop the Maroons. They finished out the set and the game with a 25-22 win.

Coach Hancock was happy to have the win but noted, “I was looking for more energy tonight.  We played better in Dillon on Tuesday.  I thought we could have gone after more balls.”  She praised Corvallis for having great defense and digging up a lot of hits,  “We need more energy and have to find consistency each and every game.  We have a tough conference and we need to show up for each match.”

The Maroons are now 2-2 on the season.  They will play next Thursday at East Helena and at Frenchtown Saturday, Sept. 24th.