The offenses might have had some cobwebs to shake after a sizable break from play, but some credit should probably be also due to Butte Central and Hamilton defenses for their girls’ basketball tussle Saturday at the Maroon Activities Center as BC girls win the Hamilton rematch.

Butte Central won the Southwestern A Conference defensive struggle by a 47-38 margin in a rematch of last year’s state Class A championship game played in Hamilton. The Broncs won that one. They never led in Saturday’s contest.

“(The offensive play) was typical for after the first of the year and being off for two weeks,” Meg Murphy, head coach of the Maroons, said of Saturday’s return to action. “You have to get back your momentum and get back to playing your stuff.”

The BC offense gathered in three players who scored in double figures. Mollie Peoples led the way with 15 points, Emily St. John tallied 13 and 6-foot sophomore post Kailee Murphy, daughter of the coach, put in 11 while playing her best game, so far, of her career. 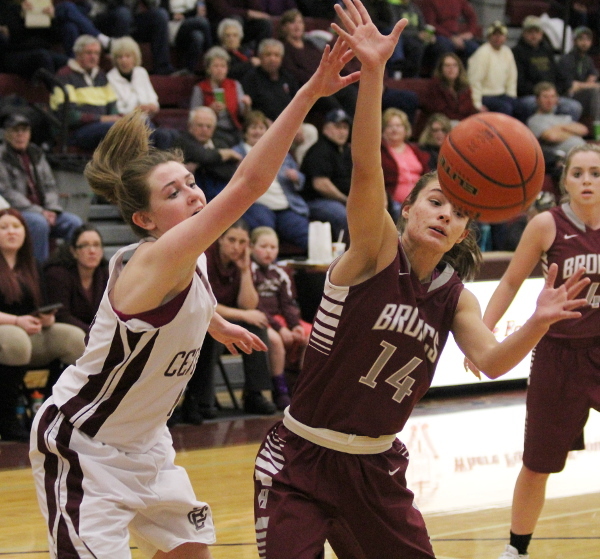 The team defense, though, shined a little brighter. Butte Central held Hamilton to 30 percent shooting from the floor and forced 23 turnovers.

“I was pleased with the defense,” coach Murphy said. “I thought if we could hold (the Broncs) under 40 points we’d have a chance to beat them. I thought that was our goal and we kept them to 38.”

A big, early lead the Maroons built helped set the Broncs back on their heels, but did not put them away. The fatigue from comeback, though, may have factored in the decisive fourth quarter.

“Hamilton is quick and good and all the things they always have been,” coach Murphy said. “They love that dribble penetration and they have the guards. They’ll get better. We’ll get better.”

The boards were likely where BC’s defense proved most important. Butte Central yanked down 31 rebounds, almost twice as many as the 17 Hamilton grabbed. Murphy pulled down a game-high seven while senior Sierra Pica snared six and also blocked two shots.

Pica, who signed with Dickinson State for volleyball also on Saturday, tossed in the other eight points her team scored.

“Our posts, Sierra and Kailee, had their best game, I thought,” coach Murphy said. “They were touching the ball, not as much as I’d like to see, though. If we can get 15 to 20 points from our posts, it will make our inside-outside game better. We can’t win if they don’t score.”

The BC girls scored the first eight points of the game as Peoples opened with a 3-point basket, Pica sank a free throw, Murphy took an over-the-top feed from Pica to the hoop and St. John netted a basket off an assist from Peoples.

Breann Duce delivered a 3-ball for Hamilton’s first points. She hit two more before the end of the quarter. The Butte Central defense held her scoreless the rest of the way.

The Maroons led 18-8 after a St. John basket with 1 minute, 44 seconds left in the first quarter. Duce’s last trey finished the frame.

The BC lead grew to 25-16 after a Pica basket at the 4:39 mark. The Broncs then stampeded for eight straight points, four each by Baylie Duce and Reilly Rostad, to clip the deficit down to 25-24 with 58 seconds to go in the half. St. John looped in an off-balance floater on a drive and the half finished with Butte Central ahead, 27-24.

Baylie Duce’s shot jumper took Hamilton to within a point of the lead 27 seconds into the second half before the Maroons ran off seven points in a row. The surge sent them to a 36-29 advantage with which to start the fourth quarter.

The teams mostly traded points in the final frame with Butte Central cleaning up the foul line, a result of forcing the Broncs to stop the clock with fouls. The Maroons foiled the ploy by meshing all five of their free throws in the stanza on the shooting of Murphy, Peoples and St. John.

“Making the free throws made a big difference,” coach Murphy said. “It kept them out of the game.”
Rostad led Hamilton with 11 points and twins Breann and Baylie Duce scored nine and eight respectively.

The BC girls will play at Dillon on Thursday and then at Livingston on Saturday.

“We talked a lot during break about this stretch,: coach Murphy said. “We come off break to play (defending state champion) Hamilton, then go to Dillon and Livingston. They’re all good, too. We don’t have an easy road.”