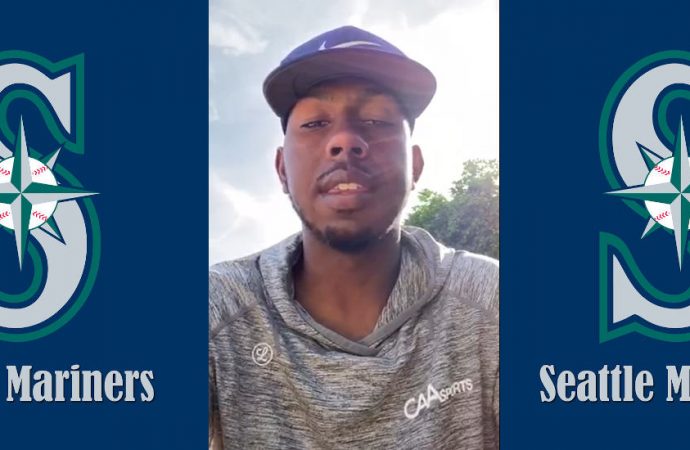 Max Demarais is still a fan of the New York Yankees.

On Saturday morning, however, he also got a pretty good reason to cheer for the Seattle Mariners.

That is when the Butte High sophomore opened a text message to find a video of encouragement from Mariners pitcher Justin Dunn.

“I just want to let you know that I’m truly impressed by your courage and your strength and your perseverance through these times,” Dunn, 24, told the 16-year-old Demarais.

Lamberty reached out to a few of his contacts, and that resulted in the text of the video. It also resulted in a text of encouragement from Tanner Vavra, a former minor league player in the Minnesota Twins organization.

Vavra played despite losing most of the sight in his right eye after a fishing accident when he was 3.

On April 27, Demarais underwent surgery for nearly 7 hours to remove a tumor behind his right eye. Surgeons also removed Max’s eye during the procedure that will hopefully end a nightmare that has lasted nearly two years.

“I’m thinking of you, praying for you, and I can’t wait to see you get back out on a baseball field,” Dunn said. “I hear you’re a pretty good player, so keep fighting, keep believing, and you have the support of me and all my teammates here with the Seattle Mariners.”

The video came as a shock to the ultra-positive Demarais.

Max, of course, would like to play professional baseball, too. He would like that to be after his storybook career playing football for the Bobcats, though.

On Monday — just two weeks after the surgery — Demarais will begin playing catch as part of his comeback, which he plans to result in playing American Legion Baseball this summer.

“I’m doing great. I’m recovering really well, actually,” Demarais said. “When I met with my doctor on Tuesday he said, ‘Man, it looks like you’ve been out of surgery two months.’ It was only a week.

“They say I’m recovering way faster than I should. It shows what being positive can do.”

Demarais struggles to take his recovery slowly. He has to remind himself that he just underwent a major surgery where surgeons cut through the top of his head.

“I can start easing back into things. I’ll start playing catch,” Demarais said. “Then I’ll start getting my heart rate up a little bit. I should be ready to go in the next couple of weeks.

With his mother, Melissa, clutching his arm, Butte High sophomore Max Demarais watches a parade of supporters drive past his house on the evening of April 24. (Butte Sports file photo)

Demarais, a first baseman who hit .378 for the Butte Muckers last year despite the vision problems in his right eye, is also a pitching prospect for the Butte organization.

“I like it all. I’m pretty good at first base,” he said. “I’m not trying to toot my own horn. First base has always been my thing. I like pitching. I like it all. There’s nothing about baseball that I don’t like. I just love baseball.”

He even likes baseball more than football. That says a lot since Demarais has attended almost every Bobcat home football game since he was born.

Now that his right eye is gone, Demarais is hopeful he will be an even better hitter this season.

“I’m hoping it is almost going to be easier this year,” he said. “Last year I had 50 or 60 percent gone from my eye. The way the light was in my it was kind of a glare. I say I had ‘vision,’ but it was just light that went that went through. I couldn’t make anything out.”

Demarais said he is even considering going out for basketball again. He did not play last season because of his radiation treatment. Instead, he worked on baseball at the Legion’s indoor practice facility.

The Miners and Muckers are hoping to open the baseball season May 30 — the Miners at home against Kalispell and the lower-level Muckers in Belgrade.

If there has been one silver lining from the delay of the season because of the coronavirus shutdown, it is that Demarais did not have to miss any games because of the surgery.

Of course, the pandemic complicated visits — before and after the surgery.

Supporters of Max paraded past his house to show support the Friday before his surgery.

While he was in the hospital in Salt Lake City, Demarais’ mother, Melissa, was his only visitor. The surgery took place on Monday. Max spent one night in the intensive care unit and two nights in the neurotrauma unit before leaving the hospital on Thursday.

“Mom was able to stay. We could only have one visitor per 24 hours,” Demarais said. “My dad (Brain) laid in the back of our car for 6 and a half hours in the parking garage while I had my surgery.”

Demarais joked that he had it easier than his parents because he knows they have been through a lot, too. The video from Dunn also mean a lot to Melissa and Brian Demarais.

Dunn is a 6-foot-2, 185-pound righthanded pitcher who was drafted twice. The Los Angeles Dodgers picked Dunn in the 37th round in 2013. Instead of signing with the Dodgers, Dunn went to Boston College and was selected in the first round (19th overall) by the New York Mets in 2016.

In December of 2018, Dunn was traded to the Mariners, along with Jarred Kelenic, Gerson Bautista, Anthony Swarzak and Jay Bruce in a deal that sent Robinson Cano and Edwin Diaz to the Mets.

Last season, Dunn made his Major League debut for Seattle. He appeared in four games, posting a 2.70 ERA in 6.2 innings.

“I watched his video and his story,” Demarais said. “He was always a little guy, but it shows that size doesn’t matter.”

For the rest of his career, Demarais said Dunn will have a big fan in Butte.

“It was pretty awesome,” Demarais said of Dunn’s video. “I followed him on Instagram and he followed me back. It’s pretty cool.”