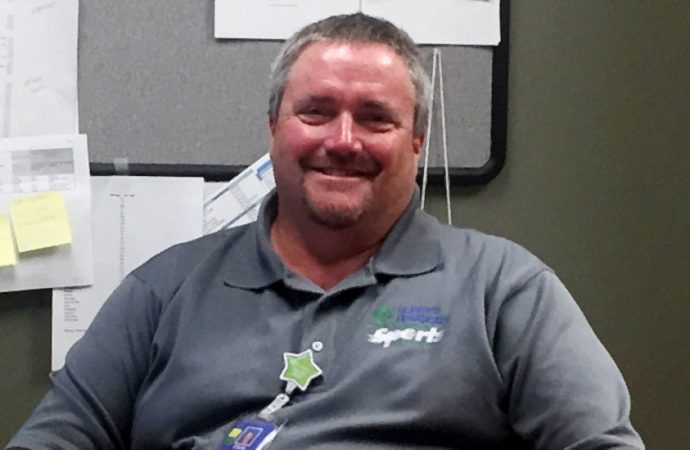 When he was a student and graduate athletic trainer at the University of Montana, Heard just so happened to be there when Dave Dickinson led the Grizzlies to the NCAA-1AA national football title.

He made a return trip to Huntington, West Virginia, the next year as the Griz finished runners up to Marshall University.

A few months after his second trip to work the national championship game, Heard got a job at St. James Healthcare just at the right time.

Dr. Nick DiGiovine, a former team physician for the Pittsburgh Steelers, was brand new to town and looking to start a sports medicine department.

In partnership with St. James Healthcare and Montana Orthopedics, DiGiovine founded Montana Sports Medicine. He picked Heard to help run the program that would drastically change college and high school sports in Butte and the rest of the state.

“At his push they started it, and I got lucky,” Heard said. “There’s no other way to say it. I was graduating at the right time. I got lucky. They took a chance on a graduate of the U of M, and I’ve been taking that in since.”

Heard, 47, was hired in March 1997, two months before he graduated from the University of Montana with a master’s degree in health and human performance.

Now, 22 years later, Heard is slated to join the Montana Athletic Trainers Association Hall of Fame. He will officially be inducted during the annual meeting Saturday in Helena.

Deer Lodge native J.C. Weida of Missoula will join Heard in the Class of 2019, bringing the list of Hall of Famers to 10.

“It’s very surprising to be mentioned with the people who are already in the Hall of Fame,”  He said. “Those guys and gals are some of the best I’ve ever been around. It’s just an honor to be mentioned in the same breath with those guys.”

Weida and Heard go back to their days at the University of Montana.

“To be going in with J.C. just makes it that much more special,” Heard said. “We’ve been great friends for a long time, and I can’t imagine it being better going in with anyone else.”

DiGiovine said he was not surprised at all by Heard’s call to the Hall.

“Chris has not only embodied the concept of sports medicine, and specifically Montana Sports Medicine, he’s also done it consistently and for a long time. That’s hard to do,” DiGiovine said. “The mantra we adopted at Montana Sports Medicine was preserve the health of our athletes. Chris has been with me every step of the way, and he has embodied that spirit where we’re there to serve the student athletes and look out for their best interests short term and long term.”

“He’s going into the Hall of Fame because he’s done that consistently for a long time. His peers recognize him for what he’s contributed.”

Before the creation of Montana Sports Medicine, Butte had just two athletic trainers — Mike Mavros at Montana Tech and Pam Green at Butte High. Green was also a teacher at the school.

While the two schools had high-quality athletic trainers, two was just not enough, DiGiovine said.

“The community and schools were highly under served,” the doctor said. “With Chris, we were able to get the right number of athletic trainers in these schools to provide for the needs of these athletes.”

Heard, a 1989 Butte High graduate, started working as an athletic trainer at Montana Tech. In 2007, he added Butte Central to his busy schedule.

Arie Grey took over as Butte High head coach in 2008. The next season, Montana Sports Medicine arrive at Butte High.

Grey said that changed everything.

“Huge game-changer,” Grey said of Montana Sports Medicine at the school. “They set the bar on high school athletic training, precaution and support. They put it on the forefront.”

“When I was playing in high school and you got hurt it was just, ‘Rub some dirt on it.’”

“They kept us healthy, and we had kids who came back from injury quickly,” Grey said. “We stayed pretty healthy that year.”

Heard and DiGiovine deflect any credit to the championship season, but they do say that effective athletic training can help  a team find more success.

“No matter what school you’re at, Butte High, Tech or even the U of M, they’re not three or four deep,” Heard said. “Four isn’t the same as one. If you can keep your ones healthy, you’re going to be more successful.”

DiGiovine put it simply, “The more starters you keep on the field over the course of the season, the better your chances are at the end.”

Grey said Butte High’s athletes are the lucky ones.

“They get treatment and rehab at the school,” he said. “They get physical therapy at school. That is huge.”

The impact of Montana Sports Medicine goes well beyond the Mining City.DiGiovine said that Heard has a lot to do with educating and improving athletic trainers around the state.

“Chris has been a pioneer in education,” the doctor said. “Chris and I worked side by side and we put 14 conferences over the years that educated athletic trainers on what’s new in sports medicine. Chris was absolutely essential as a medical director and chairman of the program to get those conferences put on. They were high-quality. They were multi-day. It was extremely high-value continuing education for athletic trainers that they could get right here in their home state of Montana.”

“They would have had to travel out of state and incur incredible expenses to get that same level of education that Chris was able to work with me and chair and organize and help provide right here in this region. Directly and indirectly, we kind of upped the game.”

Concussions were a big part of that education. In May of 2017, Heard and DiGiovine helped bring a concussion symposium to Butte. The symposium included speakers  Kevin “K-Rob” Robinson, Dr. Thomas Rau and Father Patrick Beretta.

Robinson, a four-time BMX gold medal winner and record holder, died later that year of a stroke. He was 45.

“It was hard getting everybody on board,” he said. “It was an injury you couldn’t see. If somebody breaks their arm or breaks their leg you can see that. They have a cast. Concussions, you can’t see that injury, so it was harder for them to grasp.”

In 2008, Heard was among the athletic trainers to push for a state law to require a license to practice in Montana.

“That has moved the needle,” Heard said. “It has moved the level of care that we can provide. We don’t just tape ankles. We evaluate the injuries. We educate the athletes on what’s right, what’s wrong. We then can do all of the rehab on the patients.”

“It’s a different level than what it was, even when I was here in 97.”

Concussion treatment in Butte and around the country has come along light years in those two decades.

“If a kid got a concussion or got hit, if his or her symptoms cleared in 20 minutes, he or she could go back in the game,” Heard said. “That was the standard of care. The standard of care for that is way different.”

Montana Sports Medicine created a model in which the athletic trainers do not have to answer to the coaches or administrators.

“We don’t work for the athletic department,” Heard said. “Our athletic trainers are evaluated by me. I’m evaluated by Holly (Ferguson) and Dr. DiGiovine, people who know if I’m making the right medical decisions.”

Ferguson is the senior director of therapy, wound and orthopedic services at St. James.

“That is not a cut on Matt Stepan or any other (athletic director), but they won’t know if I’m making the right medical decisions,” Heard said. “We don’t work for coaches, where there’s a conflict of interest. It’s a better model all the way around.”

Heard said he and his trainers are almost exclusively dealing with highly-motivated athletes who want nothing more than to return to action.

“There’s not a lot of pushing,” Heard said. “With a lot of athletes it is more holding back. Coming back from an ACL or something like that, they want to run long before they should be running. It’s walking that fine line between returning them as quickly as possible, but as safely as possible, too. It’s a very fine line.”

The athletic trainers also have to be aware of the psyche of the athletes.

“It’s difficult at times,” Heard said. “You know how much they want to be out there. The mental aspect of it, too, is tough. You work with them both physically and mentally to make sure they’re in the right place.”

In addition to overseeing the athletic trainers who roam the sidelines and courts in southwestern Montana, Heard serves as an athletic trainer for all sports at Montana Tech.

That takes some long hours, and that is not easy for a man with a young family. Heard and his wife Nikki have two children. Caleb just turned 10, and Morgyn will be 8 in a couple of weeks.

“For how much I work and how much I’m gone, my wife is a saint,” Heard said.

He also leans on his parents, Ed and Linda, for help, whether it is as moral support or as babysitters.

“They’re at every game,” Heard said of his parents. “As much as they are supporting Tech, they’re there supporting me, and I’m 47. I love it.”

“They’re my daycare. There’s a lot of nights when I’m not back until 6 in the morning when we’ve gone to (Lewis-Clark State College), they are there to go get the kids for Nikki if she has to go to work. It’s been nice living two blocks away from my parents.”

Those long hours are worth it. He said his favorite part of the job is the relationships he’s built over the last quarter of a century working with coaches, athletes and fellow athletic trainers.

“Getting to work with such great people, both professionally and with the athletes, they’re fun to work with,” he said. “They’re motivated. The want to be back out there playing. When you’re doing rehab with those people, it’s fun.”

Now, Heard will be honored for doing a job he truly loves. As he says, he’s a lucky man.