Looking back on the best St. Patrick’s Day of all time

It has become a St. Patrick’s Day tradition.

Every March 17, Scott Paffhausen starts a text message chain with all of the players and some coaches from the 1984 Butte High boys’ basketball team.

That starts a back and forth of guys, now in their 50s, talking about the night the Bulldogs captured Butte High’s first basketball state championship since 1958.

Mulholand was the student trainer, while Dennehy, Uggetti and Carl were assistant coaches. Head coach Pat Foley is not part of the text exchange because he has no cell phone.

“It’s just a special deal, man,” Paffhausen said of the 1984 title. Like the 1972 Miami Dolphins, the NFL’s last undefeated team, those Bulldogs make a text toast to their title every year.

If ever there was a team worth toasting, the 1984 Bulldogs are certainly that.

“Every member of this team contributed throughout the year,” Paffhausen said.

Paffhausen pointed out that Bill Osborne was also an assistant coach, and Leo Dougherty was the trainer. 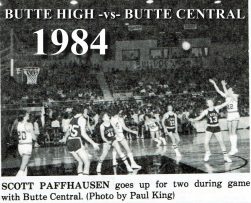 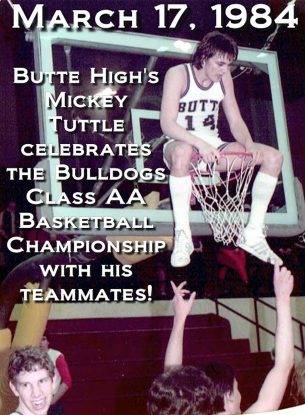 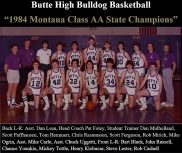 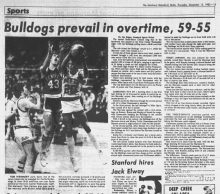 “Rob Cashell and Chance Younkin could come off of the bench and create a spark each and every time they were called upon,” Paffhausen said. “John Russell was just a fabulous athlete who contributed every time he was put on the court. Then there were the super-sophs. Hank, Bart and Fergy could just flat light it up when they were given a shot to play.”

Thanks to the lock down that will hopefully allow us all to avoid the coronavirus, this St. Patrick’s Day could easily go down as the worst since St. Patrick drove the snakes out of Ireland.

Thanks to the Butte High Bulldogs, 1984 still goes down as the best.

Those not old enough to remember it will have a hard time understanding just how crazy that St. Patrick’s Day was in 1984.

Every bar in Butte was packed, and every television set was turned to KXLF to watch the Bulldogs play Great Falls High in championship game of the Class AA State tournament at Dahlberg Arena in Missoula.

Whether they were at home, out celebrating or in Missoula, all Mining City eyes were on the Bulldogs, who had to get past the top ranked teams in the state in Missoula Big Sky and Great Falls.

After knocking off the Western AA champion Big Sky 64-59 in the semifinals, the Bulldogs beat the Eastern AA Bison 53-50 in the championship game.

Butte High officials knew that bringing the champions back to town that night would have been a recipe for disaster, so the Bulldogs had to celebrate their title far away from uptown Butte.

“They wouldn’t let us go back,” Paffhausen said. “They made us stay in Missoula. They didn’t want us to get in trouble.”

I was 10, so I watched the old television set in the front room with my brothers, safely out of the trouble of St. Patrick’s Day party.

To me, that Bulldog team was as good as there ever could be. That is because they beat my favorite team, the Butte Central Maroons, in a 59-55 overtime thriller on Dec. 14 of that season.

Those Maroons, by the way, won the Class A State crown with a 76-73 overtime win over Billings Central one week earlier in the Civic Center.

Those two titles forever cemented Butte as the “City of Champions.”

“I cheered against your team that year,” I told Paffhausen as we talked about his ’84 Bulldogs.

“Yeah, how’d that work out for you?” he replied before remembering a game in which he was an overtime hero.

Cashell is the only player from the Butte High or Butte Central teams who knew me at the time. I got to play golf with him once when he was still a Bulldog.

A couple years later, I was starstruck as I got to play golf with Lester, whose mother was my third-grade teacher during the 1983-84 season.

Cashell is about 5-foot-9, on a good day. A typo listed him as 6-9 on the state tournament roster.

“That’s always been a running joke with us,” Paffhausen said. “Everyone in the stands was always looking for our second big man. When we took off our warmup shirts, fans figured out the (mess) up in the program roster.”

Today, Cashell is the Cascade Collegiate Conference commissioner. I emailed him to wish him happy anniversary. The next thing I know, I was talking to some of my childhood legends, either on the phone or email.

Hemmert, Tuttle and Rasmussen checked in along with Cashell and Paffhausen.

Cashell remembers the masses of Butte fans converging on Missoula.

“Obviously, it was before cell phones, social media, etc., so we had no real way of knowing what was going on other than word of mouth,” Cashell said. “I remember as more and more people were arriving in Missoula that there was feeling that most of Butte would be in the stands, if possible, to watch, and for the team I think we all felt a great deal of pride and also responsibility to do whatever we could to bring a title home.”

Tuttle is probably the most remembered of the group. Like Cashell, Tuttle climbed on one of the rims at what was then called the Harry Adams Fieldhouse to celebrate the title.

A picture of Tuttle, world-class mullet and all, sitting on the rim can be found hanging on the wall outside Butte High’s wrestling room.

“My best memories of the championship game are making the final free throws to clinch the game,” Tuttle said. “I think I made 4 of 5 in the final minute or so (shows how old I am), followed by barely hearing the final buzzer going off and then hugging my teammates and celebrating with all the fans. Watching Coach Foley, Uggetti and Coach Dan Lean hugging each other after all that we accomplished.”

“I remember everyone picking Missoula Big Sky to win the tournament, and when we beat them in the semifinals. That also was a huge highlight. I still tease Brad Huse about it today,” Tuttle said. “The best thing about that day is that every year since that day, each of my teammates get together every year (via group text) or phone calls and celebrate with a toast about what we accomplished that March evening at the Fieldhouse. We shocked the state that year because we were not predicted by anyone to win that tournament … except the coaches and players on that ‘Majestic’ team. We believed in Butte, and we were a ‘real’ team. No superstars, just very good athletes that played as one to win a state championship.”

Hemmert scored 20 points in the semifinal win and 12 in the championship game. He also took a key charge with the Bulldogs up three points with about a minute left in the game. Thanks to Tuttle’s coolness, that charge sealed the victory.

“One (memory) that always stands in my mind was playing in the old gym at the school, instead of the Civic Center due to the state wrestling tournament,” Hemmert said of the championship season. “We played both of the Great Falls schools and actually clinched or at least a share of the divisional title by beating Great Falls and CMR on back-to-back nights.”

He echoed Tuttle’s sentiments about Butte High play as one.

“When we got to a game, I always knew that there was going to be a team playing, and not just a bunch of individuals trying to win,” Hemmert said.

At 6-6, Rasmussen was Butte High’s real big man. For years, I had a basketball card, made my Coach Mike Parent, of the 6-6 Rasmussen, who signed to play basketball at Brigham Young University.

I wish I knew where that card was today.

“My memories of the entire tournament are surreal,” Rasmussen said. “I don’t remember being worried at all. We were just so proud to be in the state tournament. It had been years since Butte High had even made it into the tournament, and I felt like our season was already a success.

“Coach Foley had called me into his office a day or so before traveling to Missoula to give me a pep talk,” Rasmussen added. “He wanted to be sure I was focused and ready to give my best. My dad had died a couple of years earlier, and I looked up to Coach Foley like a father. I remember coming out of that meeting determined to give it everything I had. Looking back, I can see how important it is to have a coach that gives his heart and soul to the team and has won the respect of the players.

“To me, the games are just a blur. All of us played our hearts out and worked together as a team. As the final game ended and I realized we had won, it was truly dreamlike.”

In 2007, Parent gave me a DVD of the 1984 championship game. “Dreamlike” is exactly how I would explain to getting the chance to relive the best St. Patrick’s Day in history. (Here’s a column I wrote about it.)

As the clock struck zero, the television announcer proclaimed, “The City of Champions … they’ve done it again.”

This year, St. Patrick’s Day was pretty much a dud in the “City of Champions.”

Butte Central’s 2020 title team could not even take the customary firetruck ride to celebrate its championship because of the coronavirus scare. There was no celebrating at the Knights of Columbus. There was no Dublin Gulch playing at the Silver Dollar. There was no parade.

Instead, I got to connect with a handful of members from the 1984 Bulldogs, the only Butte High team to win a title over the last 62 years.

As it turns out, this St. Patrick’s Day wasn’t so bad after all.

— Bill Foley, one of the few players in history cut by both the Bulldogs and Maroons, writes a column that appears Tuesdays on ButteSports.com. Email him at foley@buttesports.com. Follow him at twitter.com/Foles74. 1 comment