Butte High 170-pounder Kadon Queer looks for a pin against his opponent from Bozeman earlier this season. Pat Ryan photo

BILLINGS – With a dozen wrestling mats, hundreds of wrestlers and thousands of fans from across Montana, the Rimrock Auto Arena at MetraPark in Billings will be buzzing this weekend with the action of the annual Montana All-Class State Wrestling Tournament.

The two-day meet is slated to begin Friday morning, with the parade of athletes at 10 and wrestling action planned to start 20 minutes later.

“It’s nice to come in and have some kids who have experience at State,” Johnston said. “The bright lights aren’t quite as tough the second time around.”

One of Moodry’s three wrestlers has participated in the State meet, but they’ve all been there for the event, he said.

“They’re just excited to be on the floor this time,” Moodry said of 126-pound freshman Clay Walker and 170-pound Colter Stillwagon. They’ll be joined by 103-pound sophomore Roy Russell, who also made the trip last spring as a freshman.

“It was an accomplishment making it this far, and now we’re looking at having a good State meet,” Moodry said. “We’ve worked a lot this week on mental strength drills, and if they wrestle each match like it’s their last, they’ll do fine.” 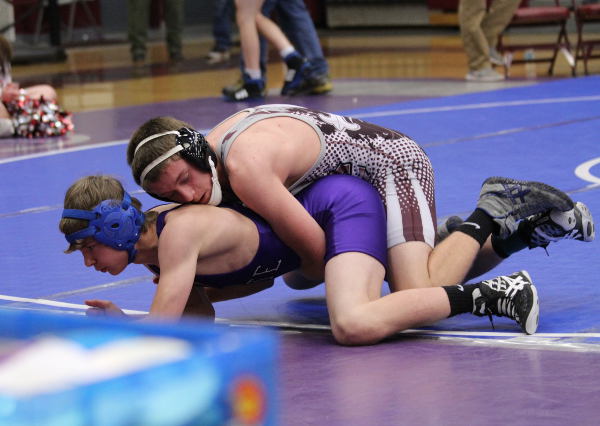 Fisher, who finished fourth at the Western A meet in Whitefish, will face Belgrade’s Brandon Rockwell at 126 pounds. Stillwagon wound up sixth at 170 and will wrestle Kyle Cannon of Laurel, while Russell’s seventh-place finish earned him a first-round match with Ben Stortz of Glendive.

The Bulldogs got second-place Eastern AA Divisional finishes from Braxton Henningsen at 132 pounds and Jeff Queer at heavyweight. Henningsen will take on Shawn Bouchard of Helena Capital, while Queer faces Eli Horn of Kalispell Glacier.

Butte High had a pair of third-place finishers, as Tyler Casey will meet Capital’s Nolan Dulaney at 103 pounds in the first round, while Kadon Queer faces Brady Needles of Missoula Hellgate at 170. Butte’s Ty Vetter (4th at 126) faces Jaden MacNeil of Kalispell Flathead, and Willie Anderson (4th at 145) is pitted against J.T. Nygaard of Helena.

Johnston said he’s happy with the way the pairings fell out for his team.

“The top four seeds are always good, but even a lot of our lower seeds got a great matchup,” he said.

Johnston said that his team’s original goal of bringing home a team trophy from State remains the same.

“We know who the top-tier teams are and we’re not naïve about our chances,” Johnston said. “Our goal was to walk out of there with a State trophy – we’re not sure what color – but our goal remains the same.”

The goal is shared by a number of other teams, including the two top dogs this season in Missoula Sentinel and Billings Senior. Also vying for a team trophy will be Missoula Big Sky, Kalispell Flathead, Bozeman and Helena High. Johnson has played out many different scenarios on paper, and likes his team’s chances.

“We talked to the kids and told them that they don’t have to do anything more than their job,” Johnston said. “Then we can trust in everyone else and just let the team thing take care of itself. No one has to do anything special, just wrestle to the best of their ability.”

The team has come miles in the previous months, Johnston said.

“It’s been leaps and bounds, and a lot of it has been mental,” he said. “It took a little while to get them to believe how good they are, but now they’re really starting to walk the walk.”

A whole season’s worth of work comes down to this weekend.

“The State tournament is kind of a different deal,” Moodry said. “A lot of times you’ll get a kid who comes in and the atmosphere brings out their best.”

Johnston told his wrestlers that this weekend is a “business trip” where they’ll get their “check” for the hard work they’ve put in over the course of the season.

“Wrestling is an honest sport,” Johnston said. “You only get paid what you earn.”