Kaleb Celli of the Giants moves in to try to tackle Braylon Larson of the Buccaneers Wednesday night on the Bob Green Field. (Bill Foley photos)

Following are the reports from the season-ending Little Guy Football Jamboree, which was held Monday through Wednesday on Montana Tech’s Bob Green Field.

Henry Harrington and “Knight” Ryder McEwen led a strong group of linebackers. Kendel “The Beast” Noctor forced a punt with a third-down sack, and Levi Wiltsie played tough at cornerback. 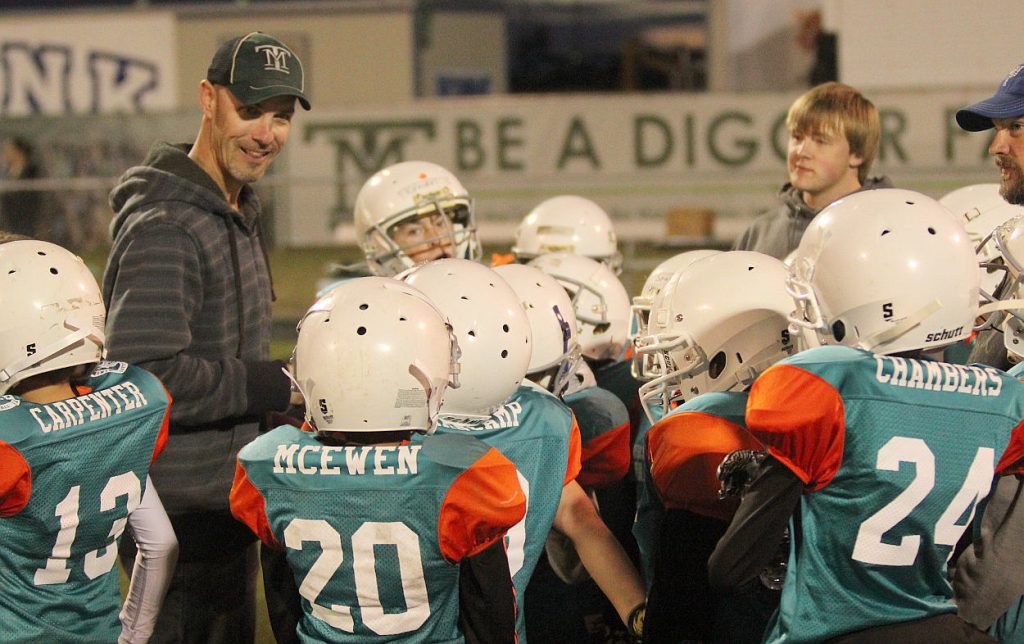 Coach Cody Carpenter talks to his Dolphins before a game Wednesday night.

Harrington Pepsi Chargers 2, Thriftway Giants 0
Mitch Verlanic punted the ball that was fumbled near the goal line, and Keghan Cline and Logan Carden swooped in for the tackle for the safety. Cline and Julloyd Silas combined for a touchdown-saving tackle.

Thriftway Giants 13, McQueen Athletic Club Patriots 12
Lavin Giacomino scored on a long run and returned a kickoff for the Giants in the win. Brooks “Was Here” Vincent ran hard, while Ziggy Okrusch had a touchdown block. Colt Hassler kicked the game-winning extra point. 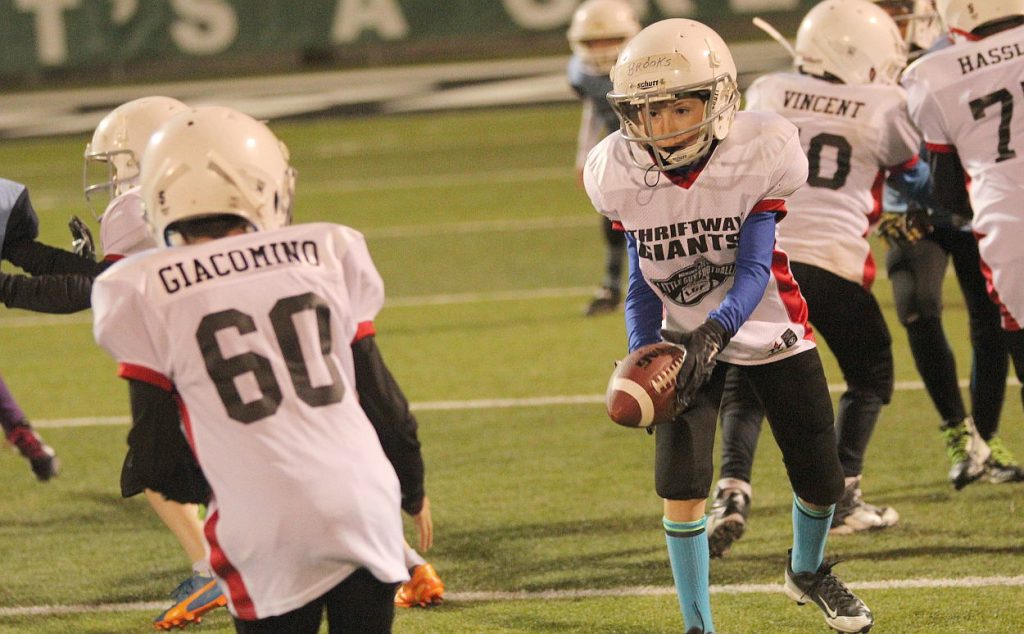 Brooks Vincent of the Giants pitches the ball to Lavin Giacomino.

Opportunity Bank Buccaneers 12, Universal Athletic Dolphins 0
Cayde Stajcar returned the opening kickoff for a touchdown, and “Mr. Intensity” Ryan Peoples scored on a long run for the Bucs. Jakoby “The Playmaker” Demessemaker” and Kadyn Summer were great on defense as the Bucs capped an undefeated season.

Jacoby Baughman led a strong defensive effort with a sack and a half for the Dolphins. Kendel “The Beast” Noctor also got in on a sack, while Zimmer Thatcher had a great run to the 2-yard line. 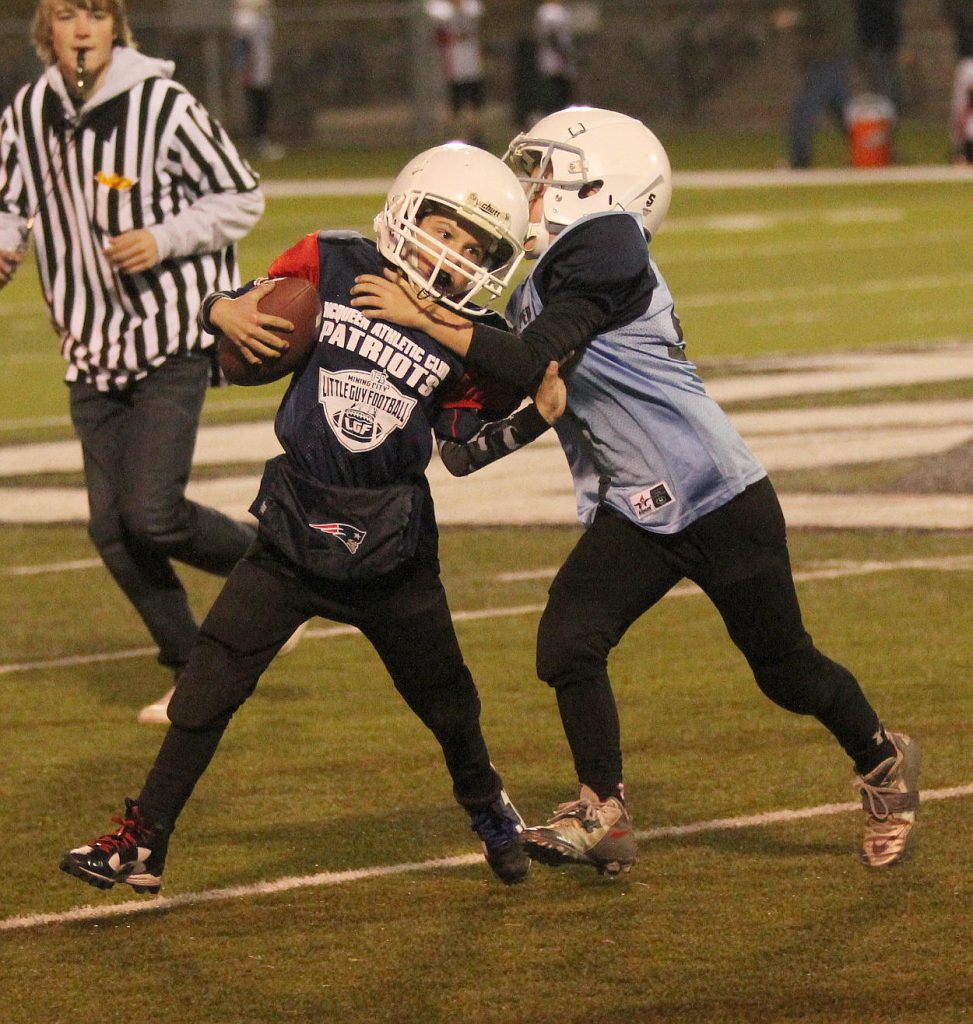 Obadiah Breeton of the Patriots tries to outrun the tackle of Gunner Bushman of the Chargers.

McQueen Athletic Club Patriots 12, Harrington Pepsi Chargers 6
Trey “The Train” Smith was a wrecking ball on defense for the Patriots, while Chase “Run For My Life” Choquette had a 200-yard game sideline to sideline. Gannon “Laces Out” Sullivan is ready to sign an NFL contract for his kicking skills, and Miles “The Mind” Gasser read the defense like a book. Josh “Sonny” Liston was a terror on defense.

Chase Lubick ran great, including a touchdown run for the Chargers. Mitch Verlanic made an interception, while Lucas Peterson, Malcom Moore and Gunner Bushman played tough on defense. As always, Walker “Jeter” Brown showed off some great enthusiasm. 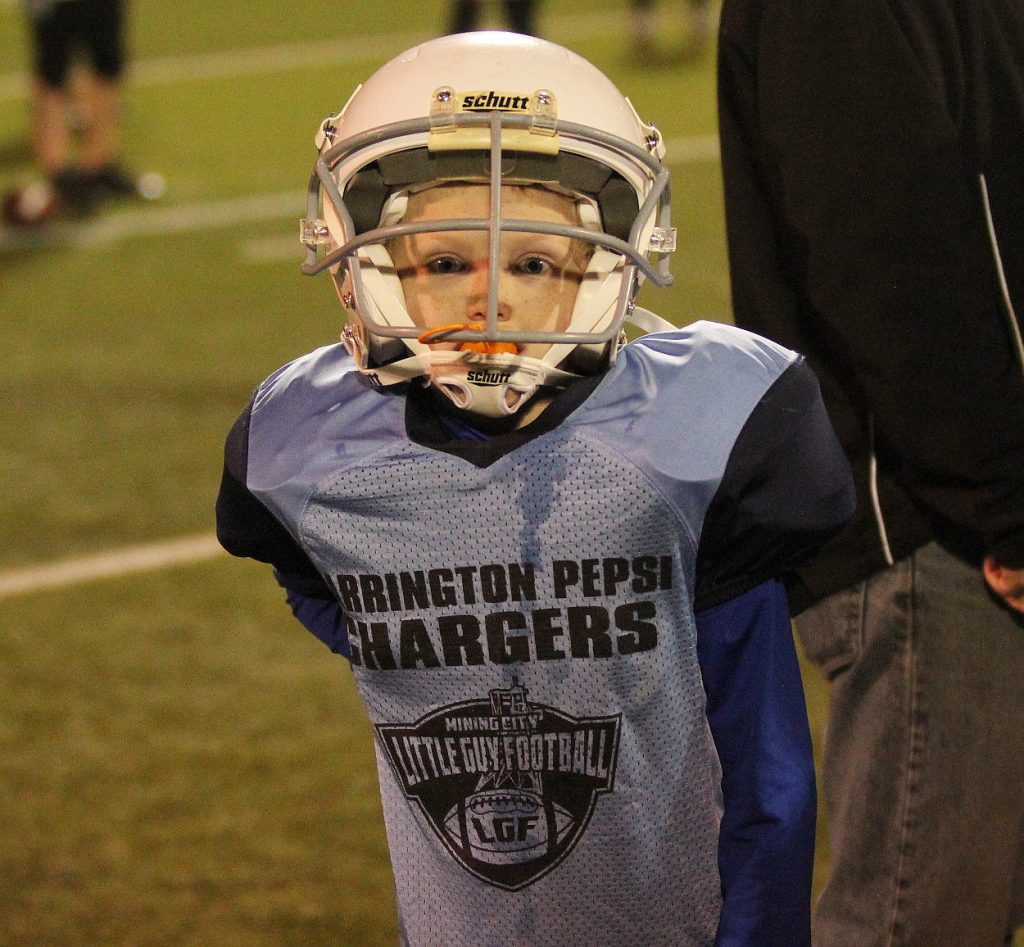 Zane Moodry ran for a pair of touchdowns, while Gason Gifford and Ryan Holbrook blocked well for the Seahawks. Russo “Bruised And” Batterman played great defense, Bryce Kean was all over the field, and the Seahawks put out a great team effort on kick return.

The Benglals got a great kick return from Bradley Adreon and great play on both lines by Jake Tauscher. Also, Cylus Sixkiller anchored the defensive line, while Derek Averyt played strong at linebacker.

Pioneer Technical Packers 8, Newland and Company Bears 0
Will Silk scored the game’s lone touchdown to lead the Packers to the win. Bryant Stauss played great on both sides of the ball, while Kaleb Paddock and Nathan Collins blocked great on the offensive line. Luke Verlanic was everywhere on defense.

The Bears’ coach didn’t single out anybody individually, but he praised the team defense against a very talented offense.

Pioneer Technical Packers 12, Lil Copperhead Rams 0
Bo Demarais scored on a pass and a run to lead the Packers to the win. Tyson Zeren caught a touchdown pass, and Gavin Roesti caused a fumble. Colin Richards-Doyle registered several great tackles, and Cayden McNeil played great on both sides of the ball.

Dillon Taylor hauled in a long pass to highlight the Rams’ performance. The team put on a great team effort, and the offense just ran out of time.

Lisac’s Tire Raiders 8, Lil Copperhead Rams 6
Logan “Steak” Thomas was excellent on both sides of the ball to lead the Silver and Black. Floyd “Iron Curtain” Verall showed some great blocking, while Isaiah “No Fear” Martinez did an outstanding job on kickoff return. Quencit “Q” Chapman was explosive on offense, and Kenny “Big K” was great on the offensive line.

Cory Galle, Jadyn Bomar and Robert Wareham led the way for the Rams.

Cale Johnson busted a long run for a touchdown, and Ayden Harryman hauled in a nice catch for a score to lead Da Bears.

First Citizens Cowboys 6, Thompson Distributing Vikings 0
Aasher Palmer stopped everybody as Da Boys won the defensive struggle. Tyler Wasley ran the rack all game, Quintin Denison was a force on the O-line, and Ryan Popovich was unstoppable on defense.

Steele’s Falcons 12, First Citizens Cowboys 6
Sam Sampson scored on a quarterback keeper, and Burke McGruder scored on a run off-tackle to lead the Falcons to the win. Brenner Boooth played well on both sides of the ball, while Jake Hennelly led the defensive charge.

Will “The Thrill” Stepan played a big game at quarterback for the Steelers. Chase Hackman was a monster on offense and defense, while Braydon “The Bullet” Pierce ran the ball as if his life depended on it. Patrick Stimatz controlled the ball on offense, while “Fast” Laine Lowder threw the ball deep with a golden arm. Lane “The Pile Driver” Norwood crushed on offense and defense, and Sammy “The Bull” Henderson played amazingly on defense.

CCCS Redskins 12, Lil Copperhead Colts n/a
Tocher Lee scored a pair of touchdowns to lead the Colts to the win. Matt Donaldson and Tim Williams both blocked well, while Trey McCarthy had a great block to create a touchdown. Cooper Hansen, Isiah Burch-Cullen and Zac Sawyer had a great game, and Jason Johns kicked the ball well.