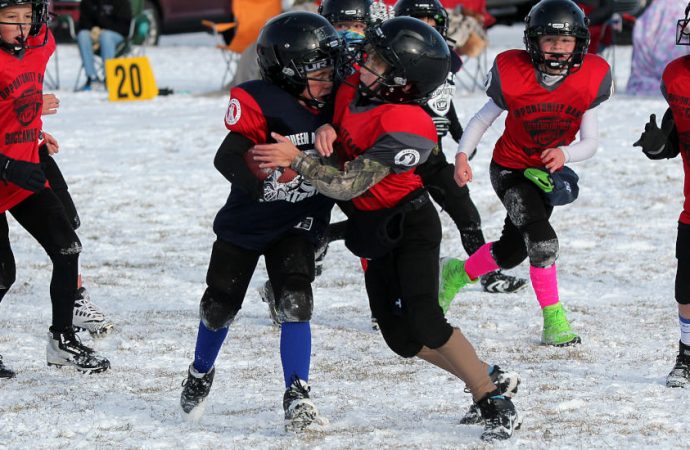 Following are the game roundups from Week 6 of the Mining City Little Guy Football League. All games are played Thursday evening or Saturday morning on the George Paul Fields at Copper Mountain Park.

Opportunity Bank Buccaneers 19, McQueen Athletic Club Patriots 0
GG Fantini ran for a pair of touchdowns, and Jaeger “Hit Man” Hansen added one to lead the Bucs to the win. Jordan “The Wrestler” Scown made a great catch and run, Hunter “The Legend” Davies was a force on the line and as a kicker, and Kristopher Perry played great defense.

“Midnight” Ryder McEwen ran for a touchdown and threw a TD pass to Marquis Abad to lead the Steelers. Zimmer Thatcher picked off a pass, and Bridger Brancamp recovered a fumble. Preston Jensen led the Steelers rushing attack. 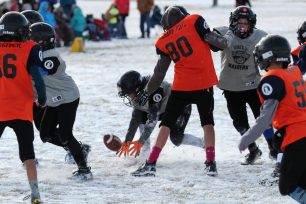 Gunner Reopelle of the Raiders goes down to pick up a slippery football.

Members of the Vikings take a knee as an injured teammate is tended to. The injured player returned to the game a couple of plays later. 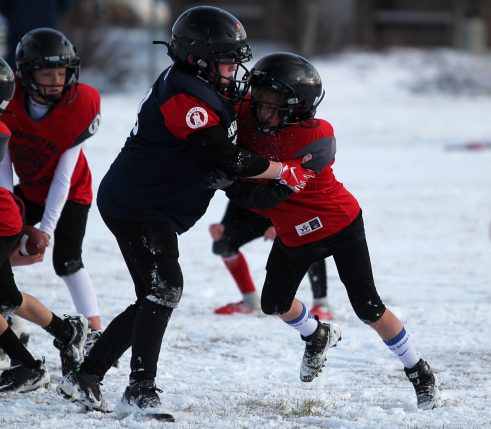 Jaeger “Hit Man” Hansen of the Buccaneers blocks Jack Nyland of the Patriots.

Highlights for the Colts were not submitted.

Pioneer Technical Packers 42, Harrington Pepsi Seahawks 6
Hudson Luedtke and Sam “The Man” Sampson each scored three touchdowns to lead the Packers to the victory. Mason Purcell set up a score with an interception, and Elijah Plute had a huge reception for a first down. Jay Tierney booted three field goals, Jake Hennelly stood out on offense and defense, and Aiden Lester provided great coverage.

Braydon Pierce played great on defense and scored on a 10-yard run for the Seahawks. “Fast” Laine Lowder played great at cornerback, Will “The Thrill” Stepan directed the team, and Patrick Stimatz and Deven Luke were a force on both sides of the ball.

Bradey Doyle scored a touchdown, and Bridger Garrison made some big plays on offense and defense for the Giants. Braylon Johnson made some great plays on defense.