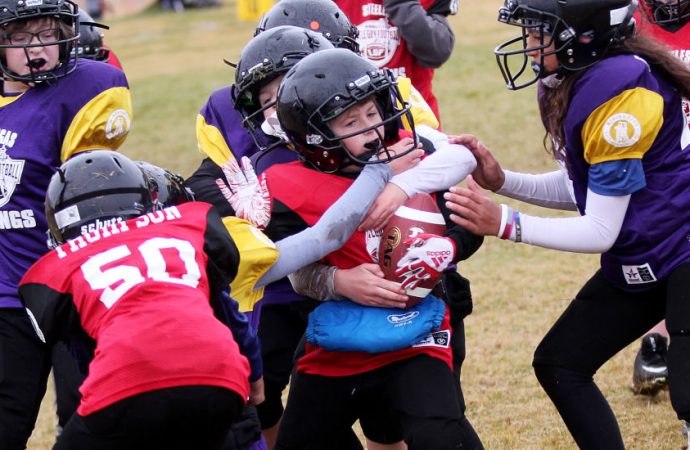 Joey Ward of the Falcons tries to run through a pack of Vikings Saturday morning at Copper Mountain Park. (Bill Foley photo)

Following are the game roundups from Week 5 of the Mining City Little Guy Football League. All games are played Thursday evening or Saturday morning on the George Paul Fields at Copper Mountain Park.

Amerigas Vikings 30, Steele’s Falcons 0
Braylon Larson caught a touchdown pass, and Colter Espelin and Darrell Orchowski did a great job running the ball as the Falcons stayed unbeaten. Tony Stajcar did a great job on both sides of the ball, while Grady Foley tackled well and led the defensive line. 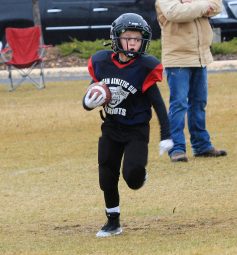 Cowboys quarterback Brooks Vincent braces for a hit as he runs into a pack of Redskins. (Bill Foley photo)

Joey Ward of the Falcons tries to run through a pack of Vikings Saturday morning at Copper Mountain Park. (Bill Foley photo) 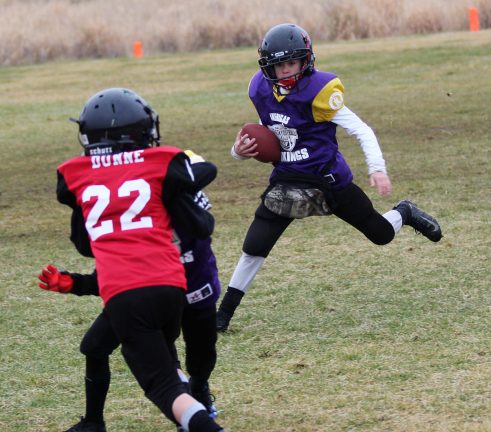 Trapper Stajcar of the Vikings reads a block as he picks up yardage. (Bill Foley photo)

First Citizens Cowboys 8, Keith Sayers Redskins 0
Jay “The Sack Man” Mullaney recovered a fumble and racked up three sacks to lead the Cowboys to the victory. Rigley Vincent also had a multiple sacks in a day that saw him ran the ball hard. Antony Alkire played great defense, Colt Hassler played great ‘D’ to go along with booting a PAT, Gavin Boucher was a force on defense, and Gauge Lemler was stellar on both sides of the ball.

Malcom Moore contained well on the outside from his cornerback position for the Redskins. Logan Carden, Peyton Johnson, Howie Pearston and Lucas Christian were strong on the defensive line. Chase Choquette, Dublin Cooney, Keghan Cline and Mitch Verlanic were excellent at linebacker.

Universal Athletic Dolphins 19, McQueen Club Patriots 0
Miner Lee played quarterback and ran for a score for the Dolphins. Raeder “Touch of” Grey added a strip fumble for a score in the win. Blake Wadas played great defense and scored on offense, while Leo Sholey played great defense, and Tyce Snow was a star on both sides of the ball.

Pioneer Technical Packers 18, Glacier Bank Bengals 12
Sam “The Man” Sampson ran for a pair of touchdowns, while Mason Purcell scored the game-winning touchdown for the Packers. Hudson Luedke picked off a pass to set up the game-winning score. Jake Hennelly registered multiple tackles in the win, Jay Tierney played great on kick coverage, and Aiden Lester played tough at corner.

Karson Pumnea returned a kickoff for a score, and Kellen Connors played his best game on offense and defense to lead the Seahawks. Braydon Pierce and Bryaden “Money” Worth had great tackles and runs, and Ben Tierney was huge at middle linebacker.

Highlights for the Colts were not provided.

Opportunity Bank Buccaneers 20, Casagranda’s Chargers 7
Gunnar O’Brien scored a pair of touchdowns — one rushing and one receiving — and Jaeger “Hit Man” Hansen busted in for a score as the Bucs picked up the win. Carsen Gillis made some great tackles, while Ashton “Up Top” Fivey and Kristopher Perry added some stellar defense.

Highlights from the Chargers were not provided.