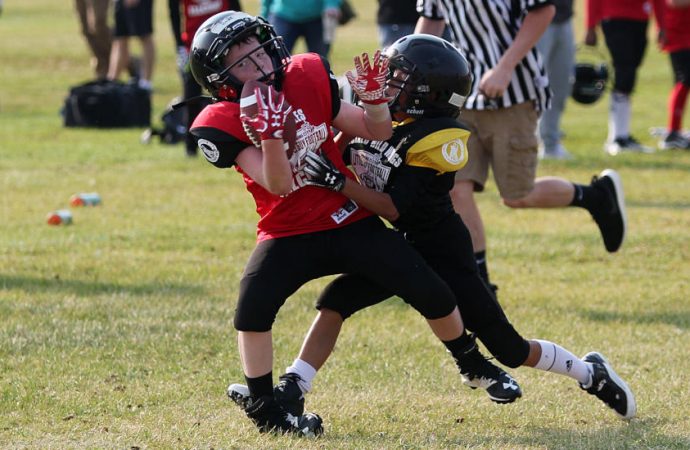 Following are the game reports from Week 1 of the Mining City Little Guy Football League. Games are played on Thursday evenings and Saturday mornings on the George Paul Fields at Copper Mountain Park.

Thriftway Giants 12, Universal Athletic Dolphins 12
The G-men played “amazing” as they battled to a tie with the Dolphins. Bradey Doyle and Brayden Giop scored touchdowns for the Giants. Riley Lopez made big play on defense near end of game, and Danny McCarthy made a huge stop on the goal line to give the Giants the ball.

Raeder “Touch Of” Grey and Josh Sutton scored on touchdown runs to lead the Dolphins. Jace Michlig and Kasen O’Keefe led the way up front, while Miner Lee  played strong on defense, making the tie-saving tackle.

Opportunity Bank Buccaneers 20, McQueen Athletic Club Patriots 0
G.G. Fantini ran for a pair of touchdowns, and Jaeger Hansen danced his way in for a score to lead the Buccaneers to the victory.

Andrew Richardson added a conversion run and pass, while Carsten Gillis hauled in a catch on a conversion. Chase Garland made some great tackles.

Beau “Knows” Henderson played great at quarterback, and Bode Hazlett played tough on both sides of the ball for the Patriots. Jack Nyland blocked well, Marcus McMullen made some nice catches, and Colton Sullivan ran the ball “super hard” at tailback.

Buffalo Wild Wings Steelers 18, Steele’s Falcons 14
Marquis Abad ran for a pair of touchdowns, and quarterback Ryder McEwen turned a bootleg into a first down to seal the victory. Preston Jensen broke free for a 35-yard run, and Jacoby Baughman was all over the field on defense.

Josh Liston ran for a touchdown before hooking up with Tristan “Mr. Fancy Pants” Hafer for a score for the Falcons. Chace Fulton and Obadiah Breeton were all over the place on defense. 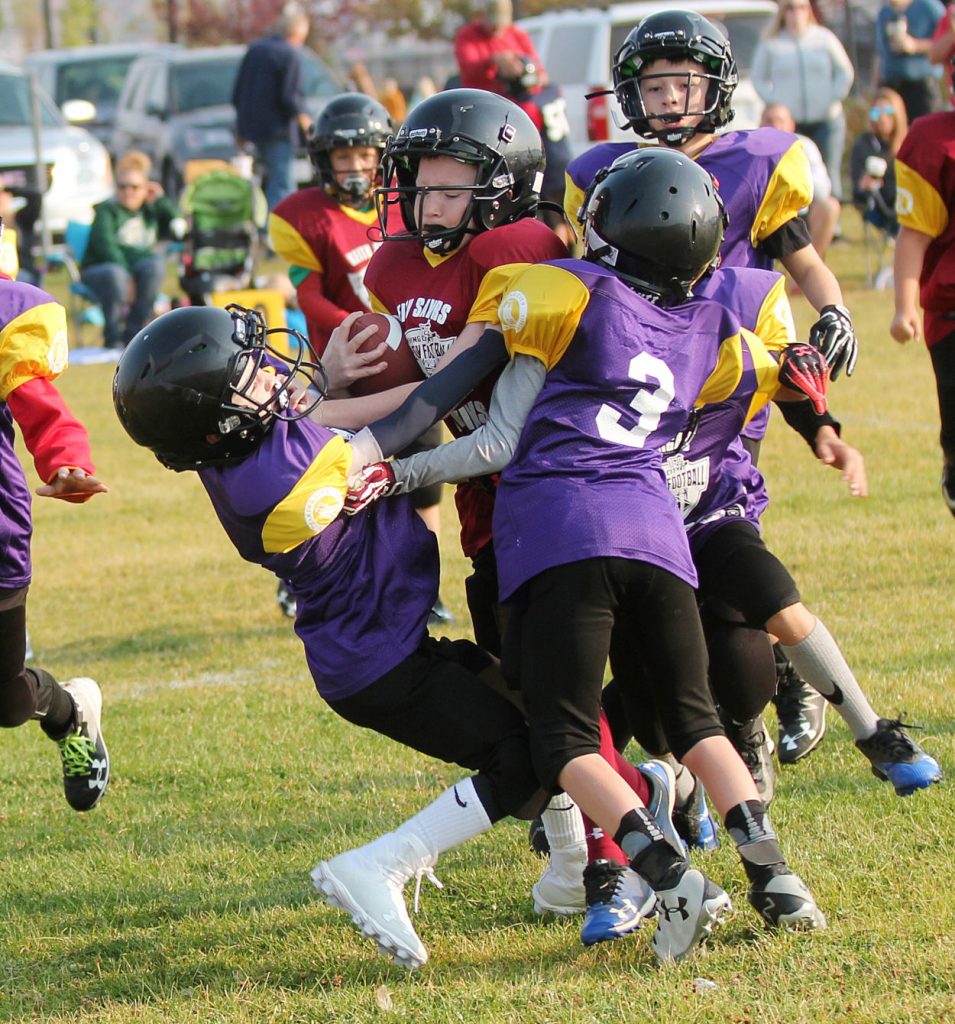 Amerigas Vikings 20, Keith Sayers Redskins 0
Trapper Stajcar ran for two touchdowns, and Ryan Peoples busted in for one as the Vikings started the season with a win. Grady Foley and Kadyn Sommer played great on the line, and Will McGree picked off a pass to help preserve the shutout.

Chase Lubick and Logan Carden both ran well for the Redskins. Peyton Johnson and Howie Pearston played great on the defensive line, and Tatum Giacomino did a great job blocking on the offensive line.

Highlights for the Colts were not provided. 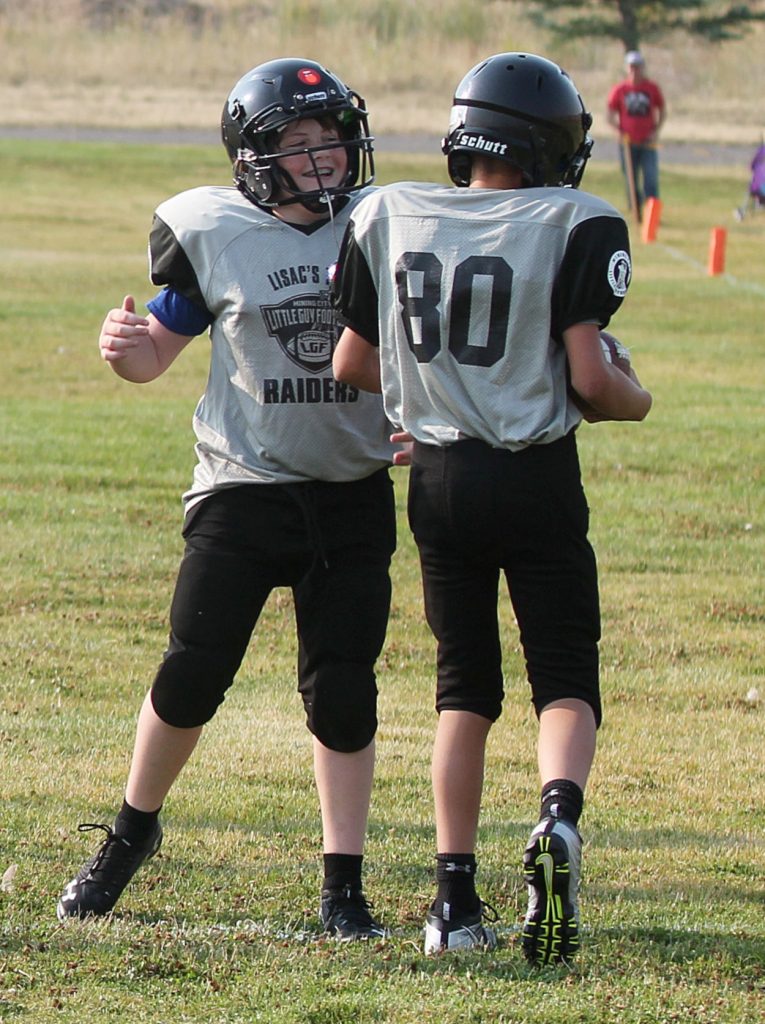 Lisac’s Tire Raiders 21, Newland and Company Bears 6
Quarterback Dylan Bache led the way for the Silver and Black. She ran for a touchdown, while Gunner Reopelle powered in for a pair of scores. Quinin Denison was a force on defense.

Prestin Muns played great on both sides of the ball. He also caught a long touchdown pass. Colton Shea was great running and passing the ball. He stood out at safety as well. Chance Sampson commanded the offensive line as a leader at center, and Devin Rossitier made sweet tackles while playing multiple positions on defense.

Pioneer Technical Packers 40, Harrington Pepsi Seahawks 12
Sam “The Man” Sampson ran for four touchdowns — two as quarterback and two as tailback — to lead the Packers to the win. Sampson also stood out on defense. Burke McGruder played “lights out” on defense and ran hard on offense. Hudson Luedtke hooked up with Brennar Booth for a touchdown through the air. Mason Purcell and Elijah Plute played great in pass coverage, and Jay Tierney booted two PATs.

Karson Pumnea and Braydon Pierce ran for touchdowns for the Seahawks. Kellen Connors joined Pumnea with a great game on both sides of the ball. Laine Lowder played a great defensive game, and Will “The Thrill” Stepan controlled the game at quarterback.