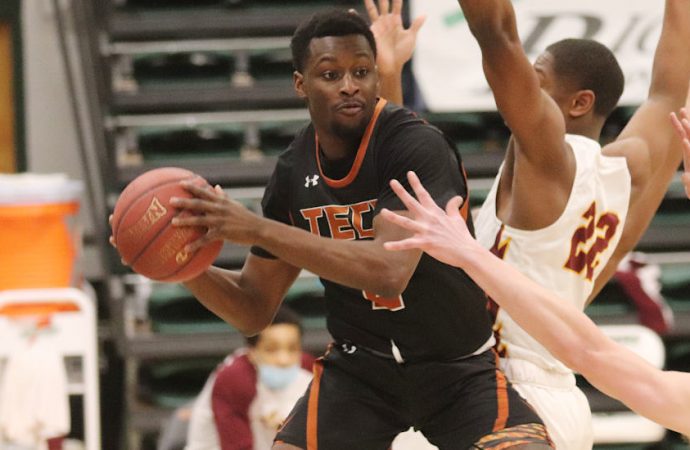 Montana Tech's Sindou Diallo looks to pass as he hangs in the air after driving baseline Sunday at the HPER Complex. (Bill Foley photo)

It did not take long to see that Sunday was not Montana Tech’s day.

MSU-Northern scored the first 15 points, and the Lights never trailed in a 61-49 win over Montana Tech in a Frontier Conference men’s basketball game at the HPER Complex. (Stats)

The loss for the Orediggers came less than 24 hours after they edged the Lights in a 65-64 thriller. The game was the regular-season finale for both teams.

“You spot a team 15 points and you’re playing uphill against a headwind at all time,” Tech coach Adam Hiatt said. “When you struggle out the gates, you think the solution is to force it, force it and force it. It just doesn’t happen organically, and everybody gets frustrated.”

The Orediggers finish the regular season at 12-10 overall and 12-8 in conference play. Tech was already locked into the No. 3 seed, and the Orediggers will open the Frontier Conference playoffs at home Thursday against Rocky Mountain College.

Montana Tech’s Sindou Diallo looks to pass as he hangs in the air after driving baseline Sunday at the HPER Complex. (Bill Foley photo)

Tech’s Cody Baumstarck wraps up after pulling down a rebound in front of Northern’s David Harris. (Bill Foley photo)

For all intents and purposes, Sunday’s game was meaningless.

Hiatt, though, said that is not the reason for his team’s struggles. He said the Orediggers came to play and played to win.

“I think we missed our first 12 shots of the game, and that just sets you back,” Hiatt said. “We were sluggish today. We were a little bit disappointed that our energy just didn’t match the road team. That can’t happen.”

The came closed the book on a season of playing games on Saturdays and Sundays — at least — over a jam-packed eight weeks.

“These back-to-back games are difficult, especially on Sundays,” Hiatt said. “It’s been a tough season. We’ve stuck together so far throughout, and we’re going to continue to stick together and get ready for our game on Thursday.”

After the slow start, the Orediggers slowly climbed into the game. Tech trailed 28-21 at halftime, and the Orediggers looked to make things really interesting late in the second half.

Trailing 47-41, Derrius Collins stole the ball and fed it to Sindou Diallo. The electrifying Oredigger senior went up for a thunderous dunk. The ball, though, bounced off the rim, something that Oredigger fans never see when Diallo takes off flying.

Seconds later, David Harris turned an old-fashioned three-point play to make it a 50-41 game. That was the last time Tech threatened.

“If we just score that bucket, all of a sudden it’s a two-possession game,” Hiatt said. “That was a five-point swing, but those things happen.”

Diallo, whom KBOW radio man and former coach John Thatcher calls the greatest Oredigger of all time, led the team with 19 points. That includes driving baseline for a two-handed dunk in the first half.

Markieth Brown Jr. scored 12 points for Tech, which got six points and eight rebounds from Taylor England. The Orediggers also got five points from Collings, three from John Dhoul and two apice from Drew Huse and Christian Jones.

Mascio McCadney’s 23 points paced the Lights, who will play Montana Western in a playoff game Thursday in Havre. Harris finished with 13 points.

The Orediggers celebrated Senior Day, honoring Liles. He is the lone senior who will not be back next season.

The rest of Tech’s seniors will take advantage of the fact that the NAIA is not counting the 2020 season against their eligibility.