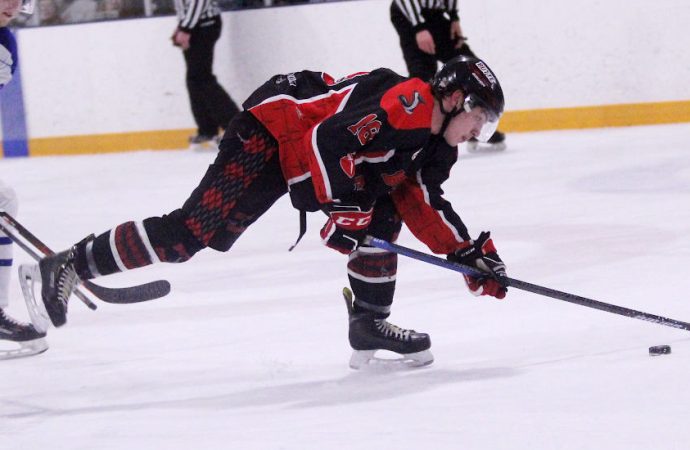 Butte Cobra Ty Stovin tries to get off a shot after being tripped Friday night at the Butte Community Ice Center. (Bill Foley photo)

The game was played in front of a standing-room crowd at the Butte Community Ice Center. Admission for the game was free thanks to a sponsorship from First Montana Bank.

Laggis’ game-winning goal was his second of the night. Johnny Baird also scored two in the win, while Blaine Krona added one in the third period.

Ty Stovin scored two goals to lead the Cobras. He also assisted on a goal. Kyler Garsjo and Nick Bradshaw added goasl. Garsjo assisted on one, and Robin Bagley assisted on two.

Robin Bagley of Butte tries to get off a shot near the goal. (Bill Foley photo)

Robert Howard of Butte gets off a shot. (Bill Foley photo)

Butte’s Robby Arver hits the deck after a collision with a Helena player. (Bill Foley photo)

Butte Cobra Ty Stovin tries to get off a shot after being tripped Friday night at the Butte Community Ice Center. (Bill Foley photo)

Phillip WInter of Butte hits the ice trying to control the pick. He gets a push from Helena’s Daniel Liner. (Bill Foley photo)

Stovin and Garsjo assisted Bradshaw’s goal that put the Cobras on top 4-3 with 12:34 left in the third period.

Baird fed Krona for the to tie the game at 4 with 8 minutes left.

Stovin scored off a Bagley assist to put the Cobras on top 1-0 just 3:35 into the game. Laggis tied it late in the first, and both teams scored two goals in the second.

The Bighorns will play the Junior Bruins in Missoula Saturday. Next up for the Cobras is next Friday’s trip to Helena for another shot at the Bighorns.