The Lady Bulldogs were firing on all cylinders on Thursday night at the Ross J. Richardson gym. The Bulldogs came out strong in the first quarter as did Belgrade.

It was a slugfest between both teams trading buckets throughout the first quarter, until with about a minute left the Bulldogs led a 7-0 spurt to close the quarter on a buzzer beating 3 ball by senior Taylor Bushman to put her team up 17-10 after one.

As the second quarter began the Lady Dogs cooled off and let Belgrade go on a couple mini spurts of their own. The Bulldogs had only 6 points more than midway through the quarter but every time the Panthers would be within striking distance the Bulldogs had an answer, they led 27-22 at the half.

The Bulldogs came out in the second half and continued to control the tempo and play good basketball. For losing a big chunk of their scoring from a season ago, tonight’s game looked good for Butte and what the season can hold, because they definitely showed they have untapped potential to compete with anyone. 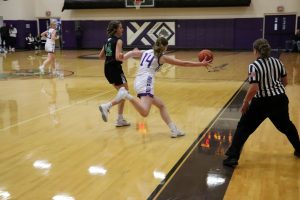 The Lady Dogs were led in large part by senior duo Emmarie Richards and Laura Rosenleaf who tossed in 14 points each. Senior Payton Clary had 6, Brityn Stewart had 5, Rian Ferriter, Brooke Groesbeck, and Taylor Bushman each had 3.

The Lady Dogs moved the ball well tonight and played great team basketball. They will head to Dillon next Tuesday December 20th to take on the Beavers @7pm.