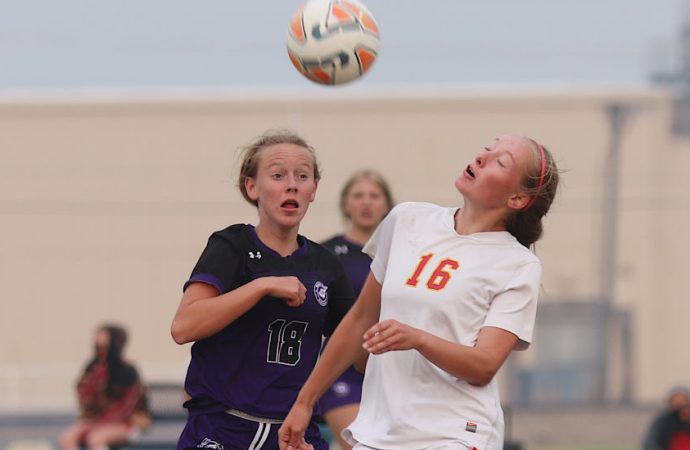 Tuesday was another obvious step of improvement for the Butte High girls’ soccer team at the Jeremy Bullock Complex.

That step, however, was not enough to overcome a quality Missoula Hellgate team and the choking smoke that has blanked much of the western part of the United States.

Butte High fell 4-0 to the Knights in a match that was called with about 14 minutes left because the air quality, which was not good all afternoon, took a turn for the worse.

Bulldog coach Jacob Steilman said he can see his team, which fell to 0-7, is getting closer to turning the corner to victory.

“If we take another step in intensity, we’ll be right there,” Steilman said. “We need to push them harder at practice to get them to another level.”

Butte goalkeeper Madalyn Rhodes holds the ball after one of her many saves Sept. 15. (Butte Sports file photo)

Hellgate extended the lead to 4-0 just before the match was called. Clara Tallent got a rebound in traffic and slipped the ball past Butte goalkeeper Madalynn Rhodes.

Beierle left about 9 minutes before the game was called with what appeared to be a substantial arm injury.

She is a part of the Butte High defense that helped keep the Knights away from Rhodes.

While Rhodes continued her impressive first season as the netminder with some crowd-pleasing saves, most of the saves were, as Stielman said, routine because Butte High’s defense forced deep shots.

“They were shooting them outside of the box because the defense was keeping them out,” he said.

The Knights were able to keep Sophia Pierce relatively clean by limiting Butte’s shots on goal.

The Bulldogs, Steilman said, need to take another step on offense. That will come, he said, when his team takes the emotion to the next level.

Next up for Butte High is a trip to Kalispell to play Glacier on Friday.