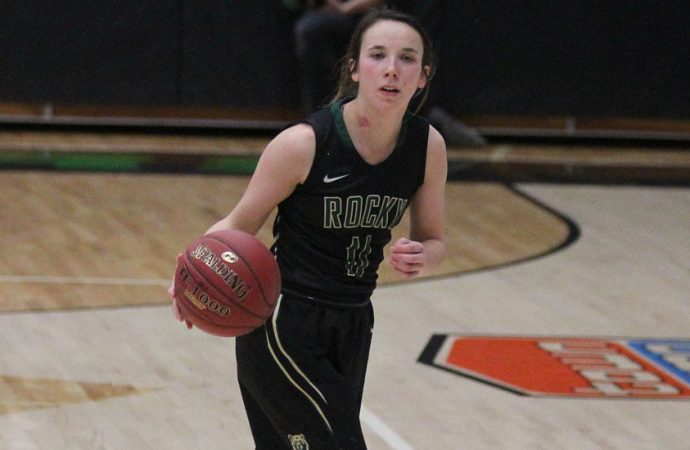 The 31 points counts as a career high for the sophomore from Butte. Thatcher, a Butte Central graduate, also recorded seven rebounds and four steals.

The Blue Hawks scored 13 early unanswered points and led the Battlin’ Bears by 18 less than six minutes into the game. Rocky struggled with turnovers early, but managed to rally back and outscore the Blue Hawks 20-11 in the second period. Rocky trailed by just a single point heading into the half. By the end of the third period, the Battlin’ Bears led 58-46 and were able to maintain a lead the rest of the way.

The Battlin’ Bears leaned heavily on Thatcher, Markaela Francis, and Mackenzie Dethman. The trio accounted for 70 of Rocky’s points on the night. Beyond Thatcher’s 31 point performance, Markaela Francis recorded her fourth double double of the season with 25 points and 10 rebounds while Mackenzie Dethman had 14 points and a team-high 12 rebounds. Keahi-lele Roy scored Rocky’s other four points.

Dickinson State was led by Ashlie Larson’s 12 points while Ashlie Watts had 10 points.

The Battlin’ Bears shot 40.4 percent from the floor, but struggled on three pointers as they landed only 3-of-23 from deep. Dickinson State shot 35 percent and hit 31.8 percent from beyond the arc.

The Battlin’ Bears will open up Frontier Conference play next week with a game against University of Providence on Dec. 5.