Sitting between his parents Henry and Lyla, Butte High senior Kooper Klobucar signs an NAIA National Letter of Intent to play football at Montana Western Thursday at the Richardson Gym.

It appears the Butte High Bulldogs are getting the band back together in Dillon.

“I’m very excited,” Klobucar said after signing in front of a group of teammates, coaches, friends and family, including his grandparents Henry and Colleen. He will play on the offensive line at Western.

In Dillon, Klobucar will join Butte High seniors Gavin Vetter, Keegen Muffich and Devon Cook as fellow Bulldogs moving on to play for the Bulldogs.

Like with the other three, Butte High coach Arie Grey thinks Nourse is getting a steal with the 6-foot-6 Klobucar, who has slimmed down to 290 pounds.

“He’s a big kid with great feet,” Grey said of Klobucar, who this week was named all-conference honorable mention on the hardwood. “You watch him on the basketball court with his vision and things like that. It equates to football, too.

“He’s super athletic. He’s a mountain of a man.” 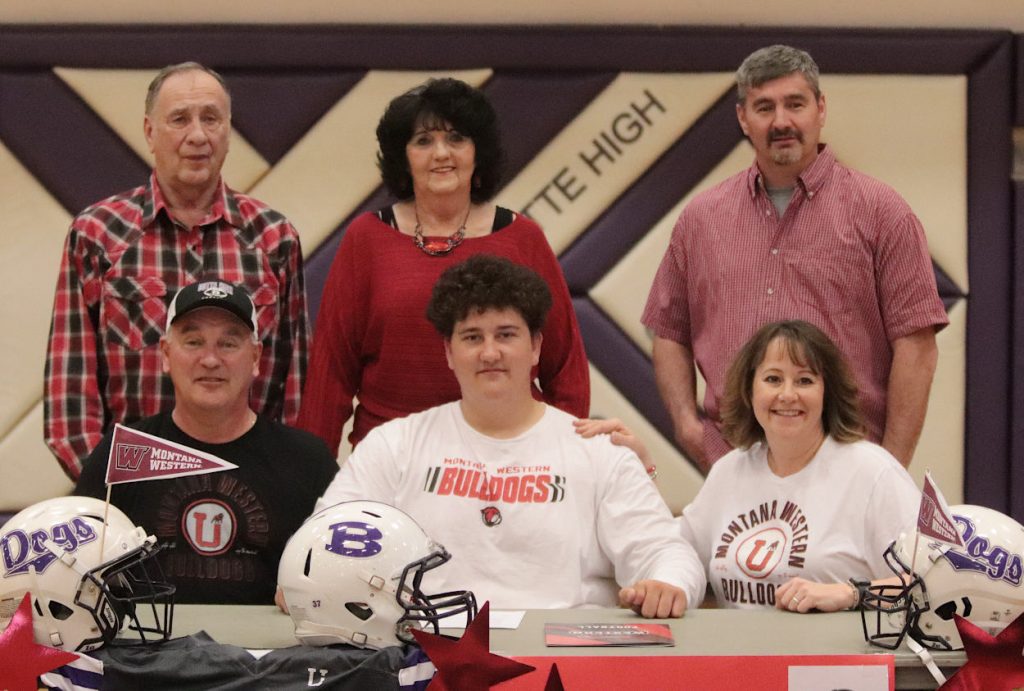 Like Cook, who signed two weeks ago, Klobucar is just learning offensive line. Cook and Klobucar both arrived as freshman at Butte High playing quarterback.

Klobucar, who ended up lettering two times in football and two times in basketball, started at right guard for the Bulldogs last fall.

“I’ve never seen anyone be able to do some of the things on the basketball court and football field,” Grey said. “He’s still young. You look at what he did for us as the year went on. He got a ton better. He just got more comfortable with what we were doing.

“Once he gets down there and gets acclimated to what college football is, I think he’s going to do some neat things. In Devon and Kooper, they could have two dudes starting for two or three years.”

While he also played tackle, Klobucar, who also competes in track for Butte High, said he hopes to slide in at guard at Western. That, he said, fits his mentality better.

“I like hitting people,” Klobucar said. “I like guard. On power plays, you get to pull sometime. You get to pull and lead the way.”

Klobucar seems to have a plan for his future mapped out. He said he will major in ecology and work toward becoming a conservation officer. Klobucar, who is excited about going to school so close to so many good fishing spots, has long thought about being a game warden.

“I thought it was really cool when I was younger,” he said. “I thought that’s what I want to be.”

Grey said he has no doubts Klobucar can do anything he wants on the field, in the classroom and beyond.

“We were lucky to have him,” the coach said. “He’s a good kid and the sky’s the limit for him.”