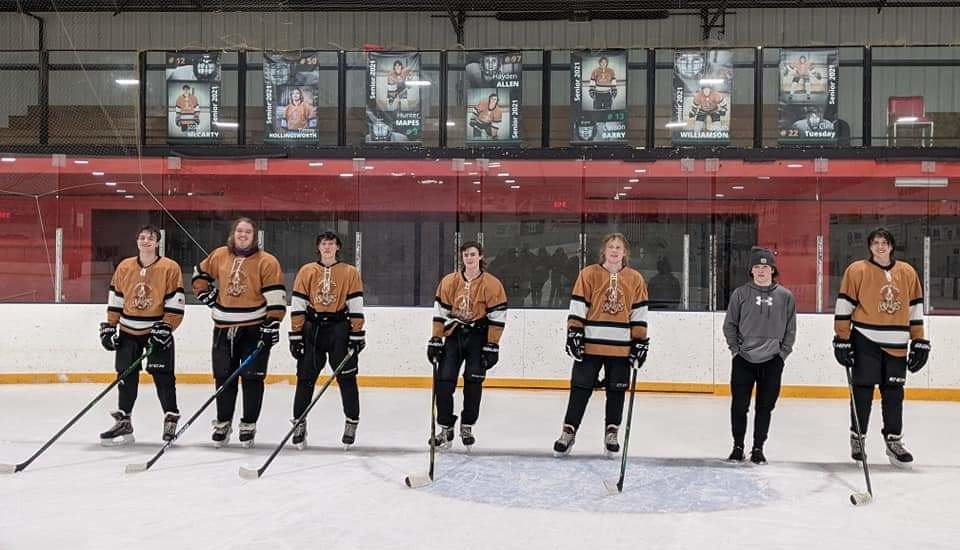 The Kings started the weekend with a 9-0 victory Friday night. Glasgow battled back for a 4-3 win on Saturday.

Barry is a captain, while Allen and Williamson are assistant captains.

The Friday Senior Night matchup began with a pair of goals by Barry late in the first, and the Kings never let up from there. Mapes, McCarty, Williamson and Allen kept the momentum going in the second period adding five additional goals.

Mapes and Barry brought the score to 9-0 in the third by each scoring one goal and earning themselves a hat trick. Sophomore goalie Eddie Kazmierczak gave the Kings the shutout with 18 saves.

The Ice Dawgs contributed 21 penalty minutes to the Kings win, but only Barry’s first goal was credited to a power play. Williamson and Allen each had two assists along with Tuesday.

The Ice Dawgs opened with a Gage Siefert goal less than a minute into the Saturday morning game. Tatum Hansen brought the score to 2-0 at the end of the first period, and Lex Fairclough brought another goal at the beginning of the second period for the Ice Dawgs.

It took the Kings late into the second period to answer with a goal by Mapes.  Allen opened the third period with a goal 27 seconds in and was followed by another by Mapes to tie the game at 3. Mapes and Allen each provided the assist for each other.

One minute later the Ice Dawgs answered with another goal by Trevor Delaney. The Ice Dawgs goalie withheld an onslaught of King shots in the last minute and a half to take the win with 42 saves. Kings goalie Mike Buffa was credited with 30 saves.

Next up for the Kings is Feb. 13 and 14 games at the Flathead Fusion.