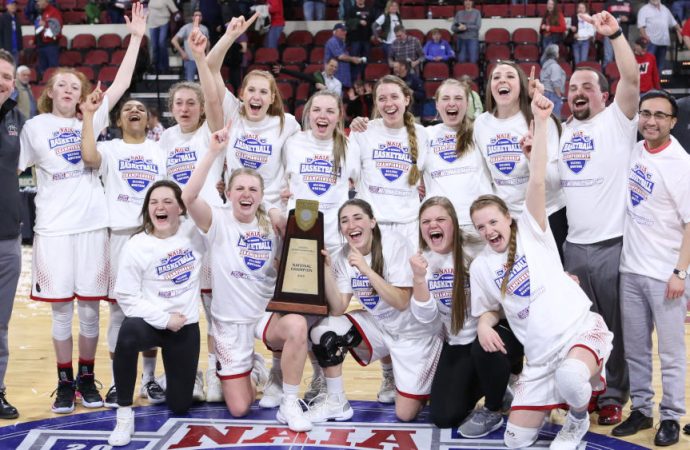 The Western Bulldogs pose for a team photo after winning the national championship Tuesday night in Billings. (Wally Feldt photo)

One night after winning a dramatic overtime battle in the semifinals, the Bulldogs cruised to a 75-59 win over Oklahoma City in Tuesday night’s championship game of the 39th annual NAIA Division I Women’s Basketball National Championships at the MetraPark Arena. (Stats)

The national title is the first in school history.

The legend that is Briana King once again led the Bulldogs in the victory. The Western senior guard high six 3-pointers and scored 37 points to lead Western, which completed the season at 30-4.

King, who surpassed Western Legend Bobbi Suhr’s school record of 709 points a on Monday night, finished the season with 771 points. She tallied 1,465 points in two seasons at Western.

Lindsay Wooley is the  head coach of the national champion Bulldogs. He is assisted by Tony Nakashima.