Kevin Peoples coaching beyond his dreams

Butte native Kevin Peoples is shown in these photos by Indiana University, left, and Tulane University.

For a guy who says he never had any plans when he graduated from college, Kevin Peoples has done pretty well for himself.

On March 2, Indiana University head football coach Tom Allen announced that he hired Peoples to be the new defensive line coach of the Hoosiers.

While the Bloomington Indiana school is better known for basketball than football, Indiana has a football program that is looking to make some noise in the Big 10.

Peoples, a Butte native, is there to help with those plans. That is something the 1989 Butte Central graduate never envisioned when he graduated from Carroll College.

“To be honest with you, I thought I’d be a high school coach somewhere and teaching history or special education,” Peoples said Tuesday, between calls to high school recruits. “I never dreamed I’d get to be the place that I am.

“I didn’t have that many goals in life,” Peoples added. “I wanted to coach in college. I thought I’d go out and be a graduate assistant and come back to Butte Central or Butte High and coach.”

After graduating from Carroll College, where he was a two-time All-Frontier Conference Selection, Peoples joined his older brothers, Don and Doug, in the coaching ranks. However, he took a much different path than his brothers, who have each put in three decades leading their alma mater, Butte Central.

That path has officially taken Kevin Peoples to the big time.

“He was saying it kind of negative,” Peoples said of coaching the Green Wave, who were not known for winning on the gridiorn. “I said, ‘No. I never thought I would make it this far.’”

Tulane University is part of the American Athletic Conference. Peoples coached under head coach Willie Fritz at Tulane, where the Green Wave won back-to-back bowl games for the first time in the program’s history.

That success came after Peoples, again under Fritz, helped lead Georgia Southern to a GoDaddy.com Bowl win and a Sun Belt Conference title.

“I’m really excited to add Kevin to our staff,” Allen said when introducing Peoples as his new defensive line coach. “He brings a ton of experience and is a very strong technician. Kevin will build strong relationships with our players and help develop them to play at the highest level in the Big Ten.”

Peoples has done that at every coaching stop, and there have been many of them in 27 years.

Two of his former Tulane players — Ade Aruna of the Las Vegas Raiders and Tanzel Smart of the Los Angeles Rams — are currently on NFL rosters.

While he comes from a coaching family known for a fiery demeanor — and he laughs as he says his late mother Cathy was the fiercest Coach Peoples — Kevin Peoples said his job is to relate to players any way he can. That might me yelling at one player, while whispering in the ear of another.

“There’s no one size fits all with kids,” Peoples said. “It’s just like people — finding a way to handle people and handle kids. That’s what it’s all about.

“When we were younger, the coach was just the coach. That was it.” Peoples said. “Coaching has changed. I don’t think the kids have changed at all. I think parents have changed somewhat.”

Like his brothers and his nephew Danny, who took over as BC’s offensive coordinator after a college career that took him the University of Montana and Montana Tech, Kevin Peoples’ football passion is deeply rooted in Butte Central.

His father, Don Peoples Sr., a former Butte-Silver Bow chief executive who guided the Mining City out of desperate economic times following the closure of the mines in the 1980s, also coached at Butte Central.

Peoples started three years for the Maroons, playing running back and defensive end.

The games most remembered by Peoples with the Maroons are the ones against Butte High, and they didn’t go so well.  His Maroons lost 42-0 to the Bulldogs when Peoples was one of several sophomores starting for BC in 1986.

As a senior, Peoples and the Maroons, whose lineup included fellow seniors Steve Markovich, Mike Moodry and Brian Costello, were looking for big things when they took on Butte High.

However, Peoples broke his arm during the Maroon and White scrimmage the week before the game, and he could only watch as Butte High fell 28-18 to Chad Lempke, Todd Ericson and the Bulldogs.

“That was a huge bummer,” Peoples said. “Growing up in Butte, that’s the game you imagine playing in your whole life.”

Butte Central coach Jim Konen, who was in the final year of his six-year reign at BC, told Butte historian Pat Kearney that the Peoples injury was a huge loss for the Maroons.

“Kevin Worked so hard for his senior year,” Konen told Kearney for his book “Butte’s Big Game: Butte Central vs. Butte High.” “It was a real shame he never got an opportunity to play that year against Butte High. He was critical to our offensive game plan and was a tremendous leader on the field.”

Peoples rebounded to have a strong senior season and help BC to the playoffs. Still, missing that game stung for a long time.

“I hate to say it, but that was probably the lowlight of my career,” Peoples said. “That was a huge game.” 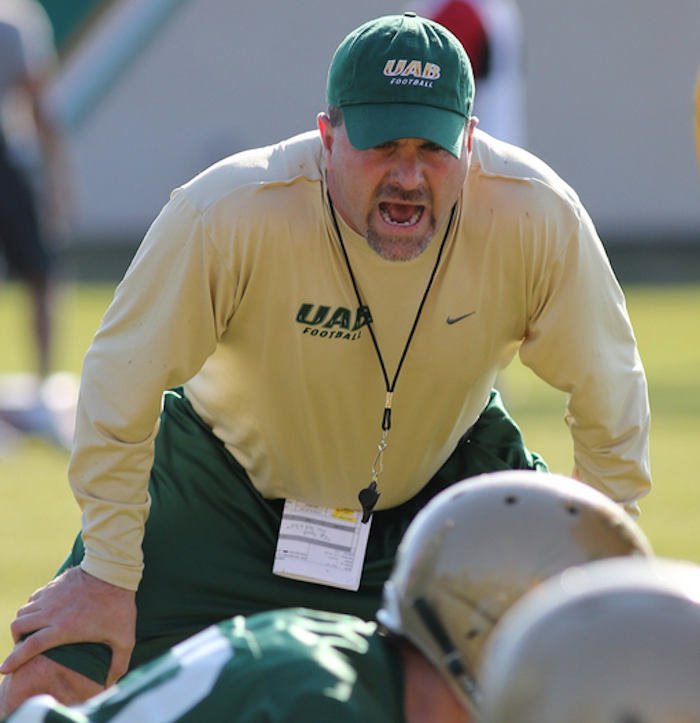 Kevin Peoples is shown coaching the University of Alabama at Birmingham defensive line in this UAB photo.

A standout in basketball for the Maroons, Peoples points out that his team never fared very well against the Bulldogs on the hardcourt, either. A lot of that was bad timing.

“When I played at Central, Butte High was dominant in basketball and football,” Peoples said. “They were good. They had great players like Gary Kane and Todd Ericson. Todd Ericson might be the best athlete to ever come out of Butte.”

Peoples was pretty darn good, too.

He followed in the footsteps of his two older brothers and took his talents to Helena to play for legendary Carroll College coach Bob “Putter” Petrino. There, Peoples played linebacker for the Saints, helping Carroll win the Frontier Conference and advance to the NAIA national playoffs.

More than he remembers all those home games at Vigilante Stadium, Peoples remembers the trips to Butte.

“I always thought coming home to play Montana Tech,” he said. “That was a big deal for me. We had so many Butte people on the team.”

One of Peoples’ assistant coaches at Carroll was Mark Samson, the son-in-law of Petrino. Samson went on to great success at Helena Capital High School and MSU-Northern.

Samson’s son, Kyle, is now the head coach of Montana Tech, and Peoples is a fan.

After his playing days were done, Peoples started coaching with Petrino at Carroll.

Then he went to Blinn Community College in Texas, where Peoples helped the 1995 Buccaneers claim the national junior college championship. That led to stops at Northwestern State University, Northern Arizona, Central Missouri, Arkansas State, Arkansas and the University of Alabama at Birmingham. Peoples also coached one season for the Las Vegas Outlaws of the XFL in 2000.

That meant a whole lot of moving for Peoples and his wife, Rebecca.

“Since we’ve been married, we’ve lived in 10 different houses in I don’t know how many states,” Peoples said. “I’d love to be at Indiana 10 more years. But math and stats don’t say so.”

While Peoples is excited about his latest move up the coaching ladder, he said moving on is tough. He said he has fallen in love with New Orleans, which he says is a lot like his hometown.

“New Orleans became my home,” Peoples said. “It reminds me so much of Butte. It’s ridiculous how much it reminds me of Butte. The bars are like Butte bars, and everyone is going to get a round.”

Saying goodbye to his players, whom Peoples said were “good kids,” was also difficult.

“There wasn’t a dry eye in the defensive line room, including mine,” he said of the day he told his players he was moving on.

As much as he loves Tulane and the Big Easy, however, a job in the Big 10 is just too much to pass up.

The Hoosiers, who are coming off their first winning season since 2007, open the season Sept. 4 at Wisconsin. Their schedule also includes trips to Ohio State and Michigan. Indiana’s home slate includes games against Michigan State and Penn State.

While Tulane struggles to fill Yulman Stadium, a 30,000 seat stadium that is usually about half full, the Big House in Michigan and Ohio Stadium at Ohio State routinely seat more than 100,000 to watch football games.

Peoples is also looking forward to working with Big 10 athletes.

“The Big 10 is obviously a great conference,” Peoples said. “In the time I’ve been coaching, I think the Big 10 is the best cross between academics and athletics, or athletics and academics — however you want to put it. They are real schools.

“There are definitely lines you don’t cross in the Big 10,” he said. “They’re very similar to Tulane. Tulane is a really high-academic school, too.”

While it has been a month since Peoples took the job in Bloomington, Indiana, he and Rebecca are still in New Orleans.

That, he says, was not the plan.

New Orleans is a major hot spot for the coronavirus outbreak right now, and the city is shut down. The coaches in Indiana are also working under a lockdown.

“We’re all just working remotely from home,” Peoples said. “Nobody goes to the office. We have staff meetings at 8 o’clock in the morning. We’re doing all that in Zoom.”

Peoples pointed out that Rebecca is a former basketball coach, so she understands the moves and all the super-long hours put in by a college football coach.

What Peoples is trying to get is how the college football season is going to work in the wake of the COVID-19 pandemic. Things like spring recruiting visits, spring drills and summer camps have either been or likely will be canceled. He worries about the 2020 season.

For the time being, Peoples has plenty of free time to think about how things will operate when college football gets back to business.

With way too much time on his hands, Peoples also has time to think about his long, successful career that he never really planned.

“The worst part about it is working for home,” he said. “I didn’t realize how many hours there were in a day until I worked from home.”