BILLINGS – The Big Dog was the big winner.

Jeff Queer established himself as the top heavyweight in the Class AA ranks Saturday, as the Butte High junior posted a 9-4 championship win over Levi Malcolm of Billings West at the State All-Class Wrestling tourney at the Billings Metra.

With the Butte High cheering section leading the “Big Dog” chant, Queer danced his way past Malcolm, hustling to repeated takedowns and the Bulldogs’ lone State title among a total of six podium appearances.

Senior 145-pound Kadin Schonsberg claimed second place after a solid run through his weight class ended with a loss in the finals to Jace Rhodes of Billings West. Butte’s Tyler Casey was fifth at 113 pounds, Willie Anderson took fifth at 160, Gabe Tierney was sixth at 120 and Ty Vetter placed sixth at 126 pounds.

The Bulldogs opened the day in strong fashion, winning four of six consolation quarterfinal matches and both semifinals.

“That was about as hot a round as I’ve coached in my career,” Butte head coach Cory Johnston said Saturday evening. “We just got the ball rolling and things were going really well for us. The kids were building off each other and the crowd was fantastic. They really kept us going. I talked to some of the fans and told them ‘You guys are a part of this. We need you just as much as we need the wrestlers right now.’ They were awesome.”

The consolation quarterfinals were nowhere near as kind, as Butte High lost all four matches by pin, though Anderson and Casey salvaged wins in their final matches.

Flathead ran away with the team title, scoring 251 points, while Bozeman was second with 189.5 and Billings Skyview took third with 170.5. Butte climbed into eighth early Saturday, just two points out of sixth place, but was unable to make any more gains in the team column.

Havre thumped the Class A field, amassing 257.5 points, compared with the 131 points of second place Columbia Falls. Eureka won the B/C crown with 198 points, while Colstrip was second with 164. 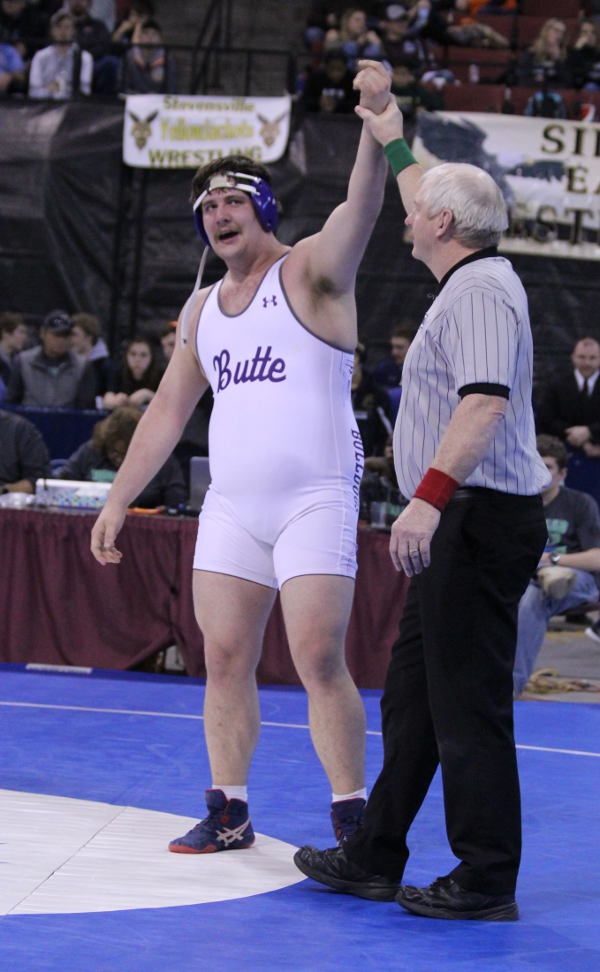 Queer started off his day with an eventful semifinal matchup with Jarret Leinwand of Billings Senior. The small but quick Bronc caught Queer in a roll and scored four quick points to take a 6-2 edge in the third period. Queer made up points with a takedown and a couple of penalty points for Leinwand stalling, but erased any concern when he took his opponent to the mat for the pin with 44 seconds left on the clock.

That set up a meeting with Malcolm, who upset Flathead’s Michael Lee in the other semifinal match. Queer had a game plan in mind and stuck with it.

Having seen – and experienced – the quick turn of fortune that so often happens in heavyweight matches, Queer has made an effort to stay on his feet, or in the bottom position as much as possible.

“I was pretty confident coming in,” Queer said. “But I’m always worried about getting pinned. I try to stay away from the ‘fat man’s roll.’”

Using uncommonly quick feet for a heavyweight wrestler, Queer has been able to score points on his feet and avoid the upper body traps.

Queer says he plans on more club events over the summer before returning for his senior season at Butte High.

“I’ll just come back in next year, keep working hard and see if I can get another one,” he said with a shrug.

Schonsberg knew coming into Saturday’s action that he would have a couple of tough matches between himself and the 145-pound title. The first hurdle came in the semifinals, where Schonsberg needed to avenge a loss to Missoula Big Sky’s KJ Swanson. 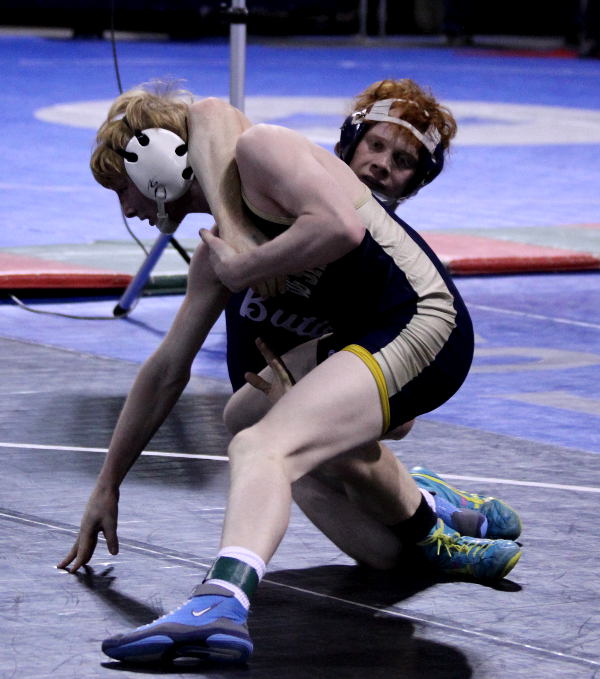 “Red” pulled off a couple sharp takedowns and overcame giving up an escape and a pair of locked-hand violations in winning an emotional 3-2 decision – handing the Eagle wrestler only his third loss of the year.

That set up the meeting with Rhodes, who has had Schonsberg’s number this season. The West wrestler took a 5-1 advantage into the third period where he was able to run an arm bar and score a pin over the Butte standout. 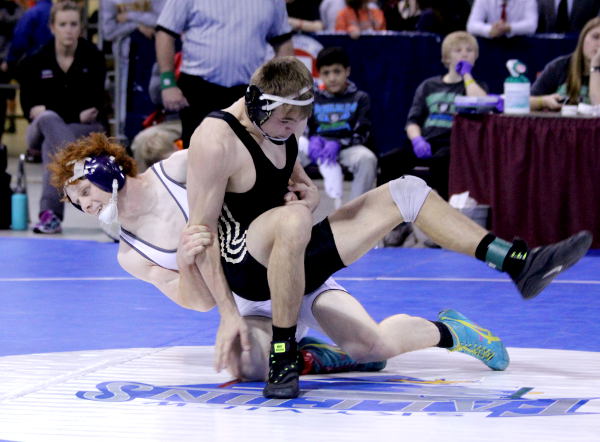 Schonsberg finished the season with a 30-8 record.

Casey got off to a solid start at 113 pounds, storming to a 59-second pin of Helena’s London Norris. He then fell by pin in the waning seconds of his consolation semifinal match with Capital’s Tyler Coddington, but rallied for a third-period pin of Skyview’s Bridger Lamb to claim fifth. 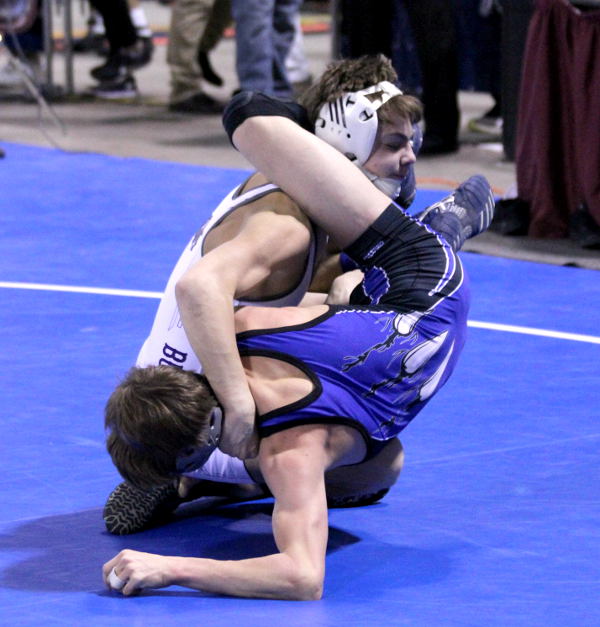 Willie Anderson shot five double-leg takedowns in a workman-like 11-5 win over Seth Boyd of Billings West, but then suffered his second setback of the tournament to Sentinel’s Beau King, who scored a pin in the third period. Anderson gave a gutsy performance to win a 3-2 decision over Bozeman’s Nick Manion for fifth place. 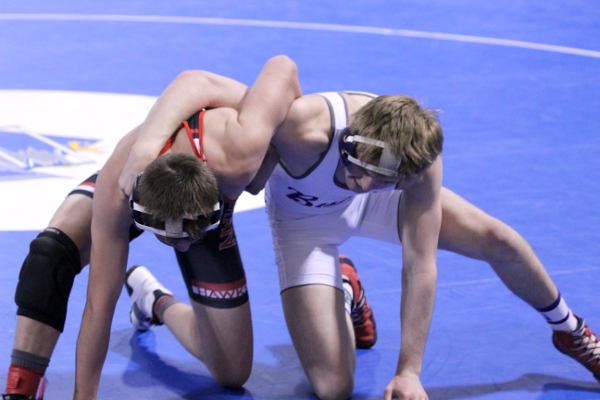 Tierney wrestled to an inspired 8-3 win over Skyview’s Danny Maciel in the consolation quarters, but then hit a rough spot when he suffered a second-period pin to Bozeman’s Chance MacLane. Dustin Murphy of Helena ended Tierney’s tourney with a 10-5 decision. 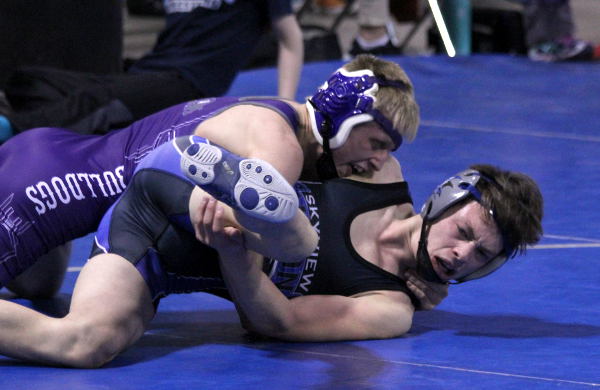 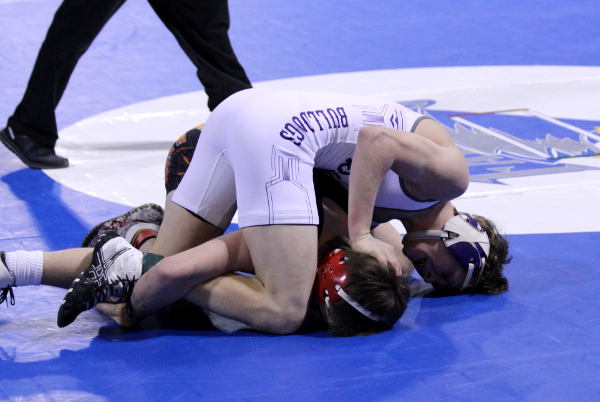 Butte freshman Quinn Sullivan and sophomore Carl Anderson advanced to the second day, but bowed out in the consolation quarterfinals, just short of the medal rounds.

The Bulldogs will lose Schonsberg, Casey, Vetter and Willie Anderson to graduation, but have a solid group returning to continue building the program.

“It’s tough to replace the kids, but you have to try to replace the points,” Johnston said. “We have a lot of points sitting in the stands for next year.”

“We’ll be back to work Monday,” Johnston said. “The Cyclops is coming up.”