When Bozeman’s Will Dissly hauled in a 2-point conversion pass from Will Weyer, Jake Dennehy didn’t panic.

Then, Dennehy had some words for junior quarterback Dallas Cook.

On first down, Cook scrambled for a nice gain. Then he hit Daum on the sideline for another pickup.

With that, Dennehy and the kicking team ran out for the biggest kick in Butte High history, a 46-yard field goal as time expired. A crowd of more than 8,000 held their breath until they heard the thud of Dennehy’s foot hitting the ball.

KBOW will replay the broadcast of that Nov. 16, 2012 game at 7 p.m. The classic will close out a series of replay games the station has played to help ease the pain of sports fans during the lockdown forced by the COVID-19 pandemic.

Spoiler alert, Dennehy’s kick, which was not pretty, was good, and the Bulldogs captured their first state football title since 1991 with a 38-36 win. The crowd mobbed the field, all looking to hug Dennehy, Butte’s newest legend.

“I knew it was straight, but I didn’t know if I had the leg,” Dennehy said of his kick. “I put my hands on my facemask. Then I saw the refs put their arms in the air, and I threw my helmet.”

As Dennehy ran around celebrating, Butte High offensive coordinator Mike Schmidt, a former offensive lineman at Montana Western, was the first to grab him.

It has been nearly seven and a half years since that kick, and Dennehy hasn’t come down since.

“I hear it quite a bit, especially coming back,” Dennehy said of his legendary game-winning boot. “I’ve been gone for a couple of years. It’s good to hear. It never gets old.”

Dennehy has been back in town for a few weeks. He had been working on his doctorate in physical therapy at the University of St. Augustine in San Marcos, California, which is just north of San Diego.

Dennehy who will be Dr. Dennehy by December, previously graduated from Montana State University.

Now, Dennehy is going stir crazy with nothing to do during the coronavirus quarantine. 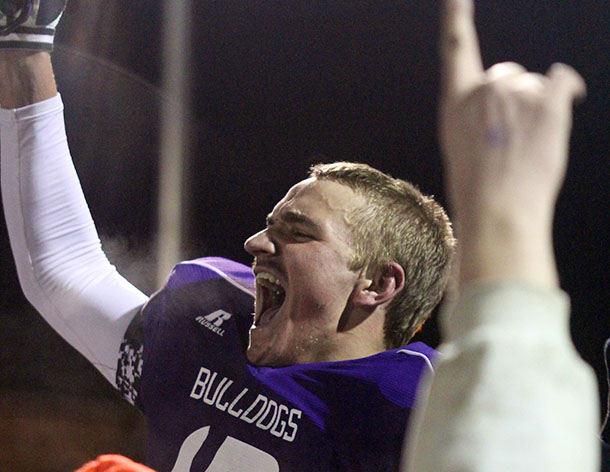 The reason Dennehy was so unlikely for the hero’s role in the championship game is the same reason is pursuing a career in physical therapy. He is leaving to go to Boise, Idaho for an internship later this month.

As a sophomore, Dennehy suffered a severely broken arm in a subvarsity football game. The injury robbed him of his basketball season that year.

Then, during the first game of his senior season, Dennehy, who played linebacker and was looking at playing college football, separated his shoulder.

That injury, which required surgery the following summer, limited Dennehy to kicking and punting for the Bulldogs during the championship season.

“Realistically, if I didn’t bust up my body, I wouldn’t have gone into physical therapy in the first place,” Dennehy said. “I pretty much lived in a physical therapy office throughout high school. I thought they were pretty cool. I want to be like that.”

A whole lot of people in Butte wanted — and still want — to be like Dennehy.

He enjoyed fame like no Bulldog had before him. A dollar bill taped to the cash register of the M&M read, “Jake Dennehy Drinks for Free” in marker for a few years.

That hero status came thanks to one kick and, as Dennehy pointed out, one very good offense.

Dennehy said he was certain Cook would get him a chance to kick at the end of the game. He thought 22.9 seconds was plenty of time.

“If we had 20 more seconds, we probably would have scored a touchdown,” Dennehy said. “It would have been (Zach) Bunney who was hero, not me.”

That Bulldog team was full of stars. After the season, 22 Bulldogs received postseason honors. Cook was named Offensive MVP of the Class AA.

Butte High would not even have been in the championship game if it were not for the super-human performance by Cook six days earlier.

The Bulldogs trailed Great Falls Russell by 16 points in the fourth quarter. Cook led the Bulldogs on two long scoring drives, capping both with 1-yard runs. He also ran for a 2-point conversion and hit Tyler Earls on a pass for another, sending the game to overtime.

“He put his team on his back,” Dennehy said of Cook of the semifinal game, which was moved to Saturday afternoon because of a terrible snow storm that week. “We couldn’t do anything. What was it, 20 below? And the field was rock hard. He just decided, ‘I’m going to run for 250 yards in the second half.’ It’s a good thing he did.”

Cook also ran for a TD in overtime, and Dennehy barely made the extra-point that held up to be the game winner — thanks to a tackle by Billy Robinson about an inch from the goal line (if that).

Dennehy almost missed that extra point because of the field conditions.

“It snuck over the crossbar by about a foot and a half,” he said. “In my defense, my plant foot slipped. I was kicking on ice.”

He was not bad

Over the years, one major misconception was that Dennehy was not a good kicker.

While his kicks weren’t as pretty as recent Bulldog kicker Trevyn Roth or current Butte High standout Casey Kautzman, Dennehy was good. He earned second team All-State at the position, and most of his kickoffs fell inside the 5-yard line.

He made 58 extra points in the season, which was a Butte High record until Kautzman booted 64 in 2019. That includes a 10-for-13 stretch in the postseason.

His missed extra point in the championship game — on Butte High’s first touchdown — was blocked by Dissly, who now plays for the Seattle Seahawks.

That did not stop Dennehy for talking trash to the Hawks before he attempted his second.

“I was talking (crap) to (Riley) Martello as he was lining up for the extra point,” Dennehy said. “He said ‘Dennehy shut up, you’re just a kicker.’ I said ‘I’m going to be kicking extra points all game long.’ He didn’t say much after that.”

Dennehy said he actually got to know Dissly, who went to the University of Washington before the Seahawks, and Martello. He competed against Dissly in track and became friendly with Martello in college. He reports they are both great guys.

“You hate these guys in high school,” Dennehy said. “Then you get to college and you get to know them and realize you’re the same person. You’re just competitive just like them.”

Dennehy did not attempt a lot of field goals during the 2012 season. That might be where the misconception comes from.

The lack of attempts, though, was mostly due to the fact that the Bulldogs did not settle for field goal attempts. That offense was a juggernaut.

Butte High’s last field goal attempt before the title winner came way back on Sept. 28 — seven weeks earlier — in a 28-19 home win over Bozeman. The kick was blocked, and Chris Johnson returned it 87 yards for a Bozeman touchdown.

That the game-winner wasn’t blocked might be due to Mitch Carroll, Butte High’s right guard on the field goal team. Carroll ran out on the field extremely late.

“He was just as surprised as anyone else that the kicking team went out there,” Dennehy said.

Whether or not he was set long enough will be a debate for the ages. Bulldog coach Arie Grey smiles when he says Carroll was, unequivocally, set. Dennehy, well, he’s not so sure.

“Realistic, he wasn’t set,” Dennehy said. “That should have been a false start.”

Set or not, the result was that Bozeman never really got off a rush on the kick.

“It was just like Little Guy Football,” Dennehy said. “They started yelling and jumping up and down. They didn’t rush. That’s a good thing because big Dissly rushing on the edge, that’s a big man coming at you full speed.”

For most of the game, it appeared that Butte High would not need a last-second hero.

Instead of going for the tie, Bozeman coach Troy Purcell went for two, and Weyer hit the future NFL player to make the now Carroll College head coach look like a genius.

Butte High Activities Director Chuck Merrifield, Dennehy’s uncle, called up his brother, Jim “Merf” Merrifield, at the Butte Fire Department to bring down firetrucks to Naranche just before the Hawks mounted the comeback.

Firetruck rides for state champions is customary here in the “City of Champions.”

“Chuck called in firetrucks up 14,” Dennehy said. “He had to call Merf up and told them to take them back. He said ‘We’ll break their hearts even more.’

“Realistically, we should have won that by 21. But you can only hold down Dissly for so long.”

Of course, if the Bulldogs would have stopped Dissly the entire game, Dennehy wouldn’t have that free pass at the M&M. He would not have reached Bulldog legendary status.

While he has relived the game over and over with teammates and Bulldog fans, Dennehy has never listened to the radio call before. He plans to listen to the broadcast, which includes an interview with him seconds after the big kick.

The broadcast, which has Paul Panisko and Kelly Sullivan on the call, also features several interviews with members of the Butte High’s 1991 championship team.

“Absolutely, I’m going to listen,” he said before referring to the coronavirus lockdown. “I don’t have anything else going on.”