Jack Whelan remembered as a ‘Hero of Butte’ 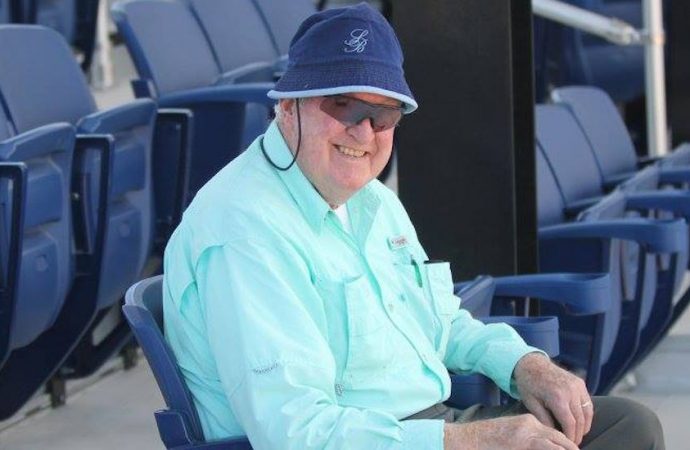 Judge John "Jack" Whelan is all smiles while checking out the construction of the new American Legion Baseball Stadium at Copper Mountain Park in July of 2016.

Stadium will be lit in Judge’s honor

“The Judge,” as he was affectionately called, would go to the end of the earth to track down every foul ball hit out of play during a Butte Miners or Butte Muckers game. If he did not get to the ball first, Whelan would pay kids a quarter for them to return the ball to the program.

Under Whelan’s watch, the Legion recycled infield dirt when the program moved from Alumni Coliseum to Copper Mountain Park. The original plan for the new stadium was to use the old blue and yellow seats from the baseball side of Alumni Coliseum.

It would have been the third home of the old seats, which were originally placed in the Butte Civic Center.

It turns out that Whelan was so far from frugal. Whelan, who passed away at the age of 90 on Saturday, was simply trying to keep the program going on a budget that included infusions of his own money.

The former Marine and Korean War veteran quite literally put his own home on the line when it came to funding the program that he brought back to life in 1968.

“I remember the first year I was with him,” longtime Whelan friend Jim “Fonz” Hanley said Monday. “He went up and got a $5,000 loan on his house.”

Butte’s Legion program was a power in the 1950s. By the late 1960s, though, it disbanded, and no Legion ball was played in the Mining City for two summers starting in 1966.

Whelan led the effort to bring baseball back. Four years later, he brought Hanley, a former college baseball player, in to help. Hanley served many roles, including stints as field manager.

“We raised a lot of money and did what it took,” Hanley said. “Our lives revolved around the Legion.” 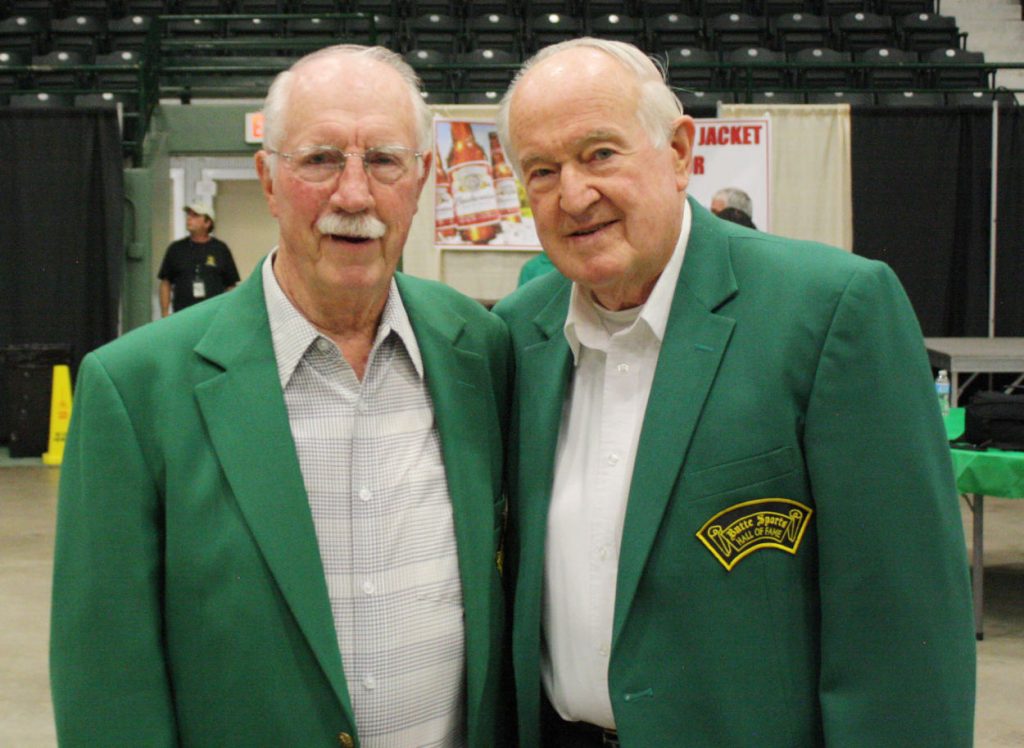 Jim Hanley, left, and Jack Whelan pose for a photo during the Butte Sports Hall of Fame Green Jacket Ceremony in 2013.

That included Whelan dishing out his own money. That is something Whelan, a former Marine who served in the Korean War, did time after time.

The old Legion bus that was used to drive around the Butte Miners and Muckers, as well as the Butte Central Maroons, was purchased because Whelan signed a personal guarantee. He also signed one time to buy instruments for the Butte Central pep band.

“When you’re a player you look at him and think he’s cheap,” said Jeff LeProwse, a former Miners player who is now president of the Butte Legion program and head coach of the Miners. “When you look at it from a financial aspect, you’re just kind of amazed that he would put his house on the line just so kids can play baseball. If the program didn’t succeed, it always fell back on him.”

For a half a century, Whelan helped make sure Butte’s baseball players had a team. The man who served as a Butte district judge from 1994 through 2006 made sure they had uniforms and baseballs, too.

Hanley, Whelan and the late Jack Cavanagh are the “Legends” of 3 Legends Stadium, a crown jewel of a ballpark that opened in 2017 at Copper Mountain Park.

If it were not for either of the three, Legion Baseball in the Mining City probably would not exist today.

Hanley deflects any of that talk to Whelan.

“He was the one who kept me in it,” said Hanley, 89, who is now living in assisted living. “I told him I was through with it, and he wouldn’t let me go. He was a driving force, and he was a personal, close friend of mine. So, it wasn’t really a job. We worked really well together.”

Hanley and Whelan were kind of unlikely friends. Hanley was never one to shy away from four-letter words, and cusswords were never part of Whelan’s vocabulary. They were friends away from the park, often going out to dinner with their wives Bobbie (Whelan) and Sharon (Hanley).

Sharon, who passed away in March of 2017, and Bobbie could always be seen sitting next to each other at Miners and Muckers games at Alumni Coliseum. 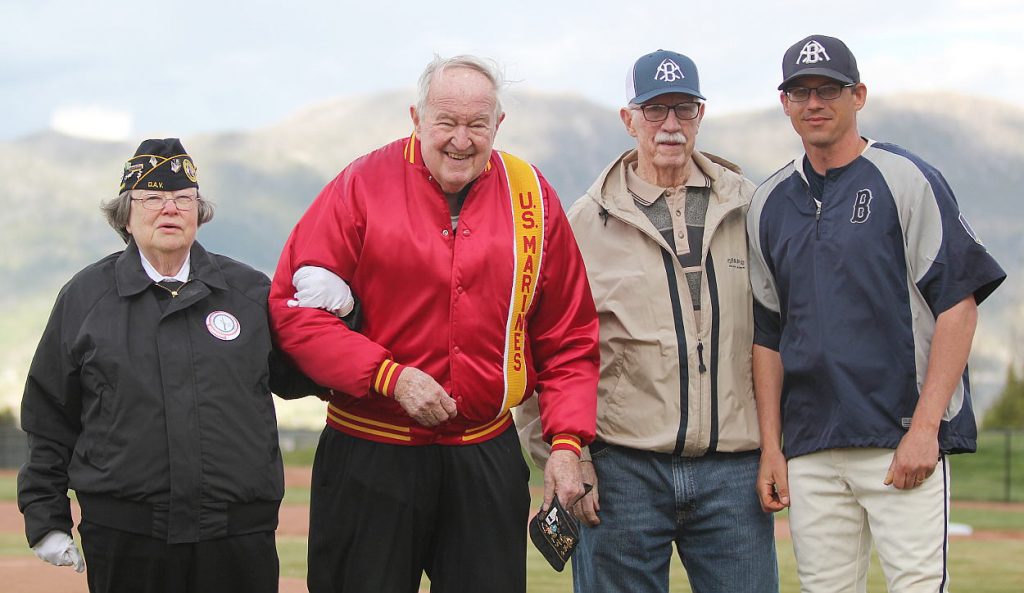 From left, Eileen Gerb, Jack Whelan, Jim Hanley and Jeff LeProwse stand on the field following the national anthem before the first game at Miners Field at 3 Legends Stadium May 26, 2017.

That Jim Hanley-Jack Whelan friendship went back to their high school days. Whelan graduated from Butte Central in 1948. Hanley was two years behind him. Both eventually worked their way into the Butte Sports Hall of Fame.

Hanley was inducted in 2003, while Whelan followed two years later.

While Hanley was often the field manager of the Miners, Whelan helped out in other ways. Every other way.

“He didn’t miss a trick,” Hanley said. “If there was a dollar to me made, he was out there hustling. He was a great man, and I could never be able to say enough about him. He was a gentleman in everything he did.”

Bob Whelan, the Judge’s son, pointed out that his dad used to have more than foul balls to chase around. Before alumni bats came along, wooden bats were a huge expense for the program.

Bob remembers a time when Butte’s Paul Riley broke three of those bats in one marathon at bat. All the coaches were excited with Riley’s effort.

“He kept fouling everything off, and I think he went through 29 pitches,” said Bob Whelan, who told his dad about the long at bat. His dad was not exactly thrilled.

“I remember my dad said, ‘Well, it was good for some,” Bob said. “He said it just cost the program a thousand bucks. It wasn’t uncommon for him to have to buy a couple thousand dollars’ worth of bats a year.”

“I remember he was always there,” LeProwse said. “He was always there, chasing foul balls and just taking care of everything. It’s stuff you don’t realize until you’re the one doing it, how much time he spent.

“It’s amazing to me that he put in that much time for that many years. It will never be matched. Ever.”

LeProwse points out that Whelan was never in it for his own kids.

“It’s just unbelievable to me the amount of time he spent doing what he did,” LeProwse said. “He never had kids involved in it. He was just being a good guy.”

Bob Whelan, who now holds the same district judgeship that his father did, is the only one of Whelan’s six children who played Legion baseball. Bob has four sisters — Joan, Kathy, Mary, and Janet — and a brother, Johnny. Johnny is well known around all four corners of the state as a Special Olympian. He was also his father’s best friend.

“My dad used to say that the only person he was worried about being more popular than him was Johnny,” Bob said.

Bob played one year for the Butte Muckers. On the field, that is as deep as the Whelan family legacy runs.

“That’s what always struck my wife as being so funny,” Bob Whelan said. “I played one year, and none of his grandkids played at all.”

Still, the Whelan family has always been synonymous with the Legion.

“American Legion Baseball was kind of our family’s way of life growing,” Bob said. “My dad always told me it was a place to be and not be in trouble.”

While Jack Whelan spent so much time on the Legion program, he was known for so much more. He and Bobbie have nine grandchildren and 13 great-grandchildren.

The Judge is well known in handball, running and speedskating, among many other things.

In 1967, Whelan beat Cavanagh for the Butte City Handball title. Whelan and Cavanaugh teamed to win the State Masters handball title in 1974 and 1975.

Three straight years from 1948 through 1950, Whelan and Neil Morrissey teamed up to advance to the championship match of the Open Division.

Whelan was heavily involved in keeping the Butte Elks Lodge alive so that handball players had a place to play. Until late in life, Whelan helped run the Elks Hoop Shoot

For decades, Whelan served as co-chairman of Butte’s Veterans Day Race. He was a longtime volunteer for the local speedskating club, serving on the Montana Speedskating board of directors.

He spent many years as a volunteer for the local and state Special Olympics programs.

You could never go to a Butte Central sporting event without seeing Jack and Bobbie. You would usually see them at Butte High games, too. Even when the Judge struggled walking late in life, he made Maroons and Bulldogs a priority.

He would bundle up in his wheelchair and watch them play football. While Whelan was loyal to his Maroons, he was also partial to the Bulldogs. His sister, Betty Merrifield, is the First Lady of Bulldog track, after all.

Bob said missing out on the fall sports season was tough for his father.

“Covid is hard on all of us, but it really, really took its toll on him,” Bob said. “He still wanted to go to all the games. He just wanted to be there. He always wanted to be at the games.”

Thanks to Jack Whelan, going to games was never a problem for so many people in Butte. He was always the man behind the scenes who helped make it happen. He was the Mining City’s Moonlight Graham.

Bob Whelan said a small family service will be held. A celebration of his father’s life will take place in the spring or as soon as circumstances allow.

The Butte American Legion program posted a statement about Whelan on its website. The Lights of 3 Legends Stadium will go on at 7 p.m. Tuesday to honor “The Judge.”

It is a fitting tribute that Whelan would most definitely object to because he spent the last half century trying to save the program money.

Hanley laughs when he thinks about the days at Alumni Coliseum. Cavanagh took money at the gate. When he wasn’t the field manager, Hanley would handle the public-address announcing. Whelan would sell 50/50 tickets, stretching his long arms for the special of $5 for an arm’s worth.

Then he would make sure no foul balls got away.

“He was chasing foul balls and selling 50/50s and being a policeman and everything else around the field,” Hanley said. “He was going to be the boss of those fields, and it’s a good thing he was. He got an awful lot done.”

Hanley said he would not trade a minute of those long hours he spent helping Whelan keep the Legion program alive.

“We had a great history together,” Hanley said. “I enjoyed every bit of it. It was a lot of fun.” 1 comment