Another tournament and another first day lead for Butte High Senior Jack Prigge.  Prigge toured the Bridger Creek Country Club with a six under par 65. Butte High coach, Eric Mankins, believes the 65 to be the lowest round in Butte High School history. He was just one shot off of also beating the Bridger Creek course record. “Jack got off the bus not feeling his best and decided to use a push cart today.” Mankins added, “with that score he might decide to  use one every round.” The Bozeman Invite is the third tournament of the season that Prigge has led after the first round. 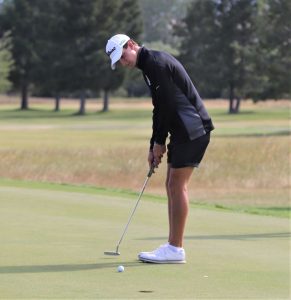 Bozeman’s Nate Pailthorpe is two strokes back with a 4 under par 67. Tye Boone also finished Day One under par. The Skyview golfer finished at 69 on the par 71 course. Cooper Bourett, of Bozeman and Billings Skyview’s Logan Connelly are tied for fourth at 73.

Butte High sophomore, Brenner Booth, is in a five-way tie for ninth place after a first day 78.  Chase Choquette finished the day with an 85, followed by teammates Gavin Roesti at 86 and Jacob Sawyer in the clubhouse with an 88.

Bozeman leads the team standings at 295 with Billings Skyview second at 300. The Bulldogs are in third with 314, Gallatin sits in fourth at 321, and Billings West is fifth at 326.

Butte High’s Dylan Bartolleti finished day one of the Bozeman Invitational in a tie for 9th place,  just 10 strokes off the lead.  Bella Johnson of Billings West leads the girls with a 75. She is just one stroke ahead of Kenzie Walsh of West. Addiley Lloyd of Gallatin holds on to 3rd with a 79.

Billings West leads the team standings at 325, Billings Senior is second at 334 and Gallatin is third at 343. The Boys and Girls will move to the Valley View course for day 2 of the invite with a 9am tee time.