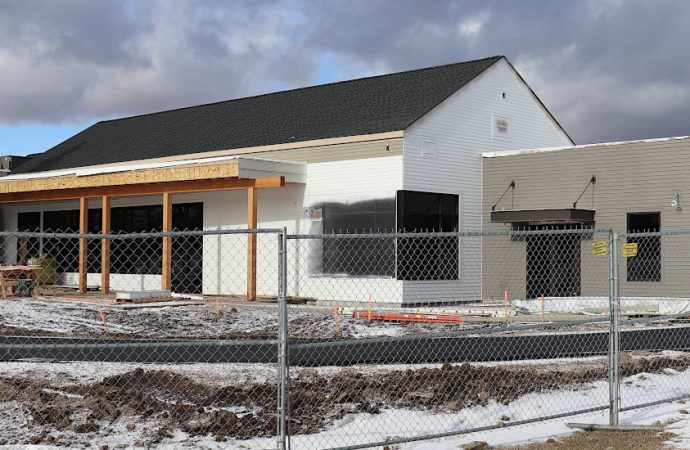 The new clubhouse at the Highland View Golf Course nears completion. Here is a photo from Thursday morning.

The name Jack Crowley is already synonymous with the Highland View Golf Course in Butte.

Now, it will be official.

The Butte-Silver Bow Council of Commissioners unanimously approved the naming of the new clubhouse at the course the “Jack W. Crowley Jr. Clubhouse” at their Wednesday-night meeting.

The clubhouse, which is part of a $4.5 million improvement project to Stodden Park, is nearing completion between the old clubhouse and the No. 9 green on the Par 3 course.

Butte-Silver Bow Parks and Recreation Director J.P. Gallagher, who was elected chief executive two weeks ago, said the decision to name the clubhouse after the longtime pro was a “no-brainer.”

“It wasn’t even close on anything that was submitted,” Gallagher said Thursday. “There were a couple of suggestions, but it was like 138-2 in favor of Jack.”

Butte native Rob Cashell, who is the commissioner of the Cascade Collegiate Conference, spearheaded a movement to encourage the county to name the clubhouse after Crowley, who served as pro from 1969 through 1996.

Nearly 100 residents added their names to a letter Cashell submitted to the Butte-Silver Bow Parks and Recreation Board.

“While the length of his service as a city employee is certainly impressive, it was his commitment to the membership, and in particular his development of youth golf that was truly remarkable,” Cashell wrote in his naming request. “Jack exposed a whole generation of ‘Butte kids’ to the game that has been a lifelong activity. The course was affectionally known as the Muni and Jack created a family atmosphere, largely because his family was heavily involved in the operation.”

Mike McGivern of Montana Resources talks as Jesse Laslovich, left, and Josh Vincent hold the renditions for the new clubhouse during a ceremony at Stodden Park on June 18, 2019. (Butte Sports file photo)

“Always the champion for the kids, he ensured that summer memberships were reasonably priced, that Monday, Wednesday, Friday dollar days for kids remained and lessons were offered,” Cashell wrote of Crowley. “The number of free lessons that Jack provided for the kids of Butte likely were in the thousands. Additionally, the Butte High and the Butte Central High School teams called the Muni their home course conducting practices and tournaments there.”

While Gallagher was not the avid golfer that he is today, he said he was very familiar with Crowley growing up.

“He was a great guy,” Gallagher said. “Everybody around loved him.”

Gallagher said the 4,500 square-foot clubhouse is expected to be opened in January. A bar serving beer and wine will be open along with two golf simulators that Gallagher expects to draw crowds to the course in the winter months.

“It will keep the place busy,” Gallagher said. “It will help revenue to be streaming  throughout the year. If you ask the guys at the (Butte) Country Club, theirs is booked pretty much throughout the winter. It will keep everyone in the golf spirit and increase participation.”

The county is in the process of trying to find someone to lease and run the restaurant. A 1,000-foot deck will overlook the course and provide a breath-taking view of the Highlands south of Butte.

The old clubhouse will now be used to store carts

A ribbon-cutting and naming-reveal celebration will be held after the coronavirus pandemic passes, Gallagher said.

“We’ll probably do an opening and then a ‘grand opening’ at a later time,” he said.