Butte Native J.P. Neal (44) and the Shanghai Warriors are shown in this courtesy photo.

Now, the four-time China national champion cannot even begin to fathom seeing his playing career come to an end.

Neal plays for the Shanghai Warriors, a member of China’s CNFL. The league was called the “American Football League of China” from its inception in 2011 until this past season.

He has played running back, receiver, tight end, kicker, linebacker and kick returner in his career in China. He has also served as a player/coach, or a “ploach,” as Neal calls it.

Neal graduated from Butte High in 1994 with three letters in football. He was mostly known as Jon or Jonathan in those days — at least as far as the media was concerned. He was also known mostly for his kicking.

However, Neal, who practiced one season as a walk-on player at the University of Montana in 1994, was so much more than a kicker.

His claim to fame with the Bulldogs was being a “meat squad” guy on the 1991 Class AA State championship team.

“Randy Riley knocked the sh– out of me,” Neal said. “He’d knock my helmet off.”

Riley, a 1992 Butte High graduate, was a star defensive lineman for the Grizzlies. He teamed with fellow former Butte High Bulldog Brian Toone to sack Marshall quarterback Chad Pennington for a safety that proved to be the difference in Montana’s 22-20 win over the Thundering Heard in the 1995 NAIA Division 1-AA national championship game.

At UM, Neal was behind kicker Andy Larson, who booted a last-second field goal in that 1995 title tilt.

Again, Neal was so much more than a kicker.

“Andy was a traditional kicker. He just kicked,” said Neal, who also played basketball and tennis at Butte High. “I also went out and played meat squad. And here comes Randy Riley to knock my helmet off my head.”

After his one season with the Grizzlies, Neal left football to serve his country in the Army ROTC.

Neal graduated from the University of Montana with a business management degree in 1998, and then he left the country.

He has lived in, among other places, England, Ireland and Portugal before settling in at Shanghai, a coastal Chinese city with a population of more than 24 million.

Neal uses Shanghai as a base for his consulting business that stretches throughout Asia.

He says he can speak what he calls “enough Chinese to survive.” The written word, though, is “chicken scratch.”

“I can live there by myself and be fine,” said Neal, who has a longtime girlfriend and a stepdaughter. “But I’m definitely not fluent.”

Neal is currently in Montana working on a couple of business opportunities in the state, including one in the Mining City.

His stay was prolonged because of the outbreak of the Coronavirus, something he is repeatedly asked about and insists does not scare him.

Neal thought his days in pads were over for sure when he left the UM football team.

“Right after the game, I went to talk to the Shanghai (Nighthawks) coach,” Neal said. “I was like ‘What do I have to do to be on the team?’ He said, ‘Just come to practice.’”

With that, Neal’s football career began again. He joined the Nighthawks, eventually becoming their defensive coordinator and middle linebacker.

“I was kind of running the show from the field,” Neal said. “I was right in the middle of the heat.”

J.P. Neal (87) is shown with teammates of the a professional CAFL (China Arena Football League) in this courtesy photo.

Neal and the Nighthawks won their first AFLC title during the 2014 season, beating the Shanghai Titans 26-24 in the championship game in January of 2015.

Then, Neal moved to the rival Warriors.

The Nighthawks basically ran a Wing-T offense, and Neal said he wanted to play on a team that opened things up a little more.

“I wanted to play real football,” he said.

It was a move that Neal compared to moving from the Broncos to the Raiders.

“My first year, guys were like ‘Whoa, what are you doing?” Neal said of changing teams. “I was like, ‘I just want to play and coach football.’”

In 2015, the Warriors won the title, beating the Nighthawks 28-6 in the championship game.

The Warriors became the first team to win back-to-back titles in 2017 and 2018. They beat the Titans 30-20 in the championship game. They defended the title a year later, beating the Titans 40-34. 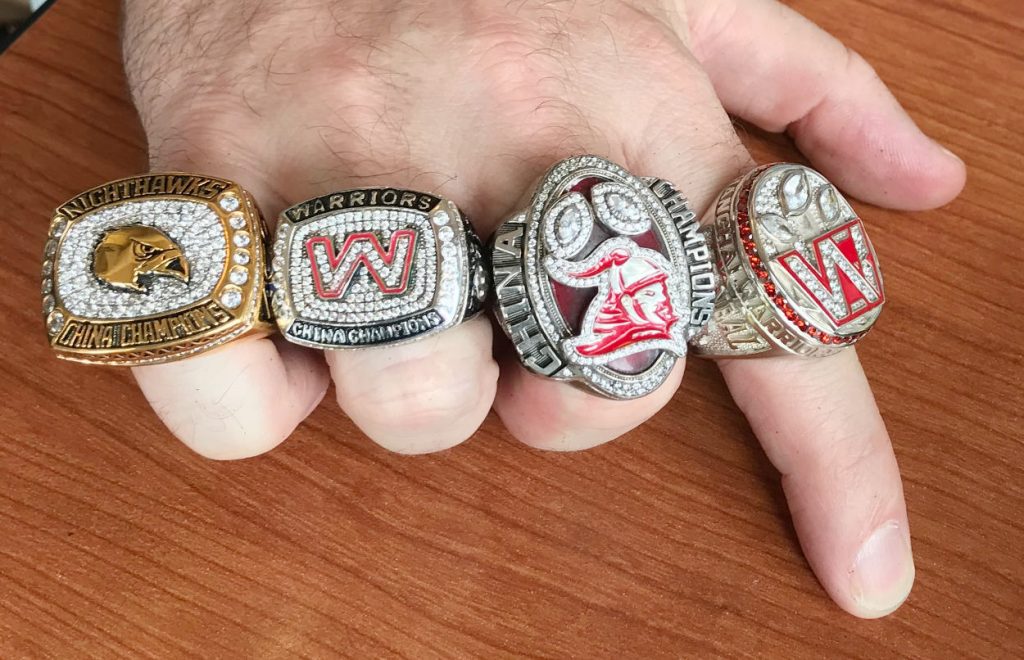 Along the way, Neal moved from defense to offense because of a banged-up shoulder and a few concussions.

“I’ve had more than I’d like to remember,” Neal said of his seven years playing football in China.

Neal, who also has served as special teams coach, still plays defense, from time to time, when his team needs him.

With the Warriors, Neal has scored six touchdowns and picked off four passes. This past season included a pick 6 in a playoff quarterfinal win, and he became the only member of the team with a touchdown on offense and defense.

On his phone, Neal has a highlight of one touchdown catch in which he ended up carrying four defenders the final few yards into the end zone.

“On that play, my teammates started saying ‘Beast Mode, Beast Mode,’” Neal said. “It’s not that I’m awesome. It’s that their tackling skills aren’t good. They haven’t learned how to tackle.”

Some teams, though, can tackle pretty well.

Three tacklers try to bring down J.P. Neal in this courtesy photo.

“I’m big. I’m bigger than most of the guys. Well, except the linemen,” Neal said. “I’m definitely the biggest wide receiver.”

The 2017 season saw Donnie Does of Barstool Sports join the team. Does, who described himself as a blogger with a drinking problem, played defensive end for the Warriors.

Does also made a documentary series on season called Dragon Skin, which is available on YouTube.

The ninth episode of the documentary features a great catch in traffic by Neal in the championship game.

Neal went up high to make the catch over the middle, taking a hit and giving the Warriors the ball on the 1-yard line. They scored on the next play.

“All day I’d been beating my guy like a red-headed stepchild on the inside seam,” Neal says during an interview in the documentary. “So, he (the quarterback) said, ‘All right, great, let’s try it.’ So, I went up to the line, did a little shake-and-bake move, he lofted it in there, hung me out to dry a bit, but we ended up getting the ball and ended on the goal line.”

Does’ documentary shows a big discrepancy between the top and bottom teams of the league. It also shows some pretty good football. 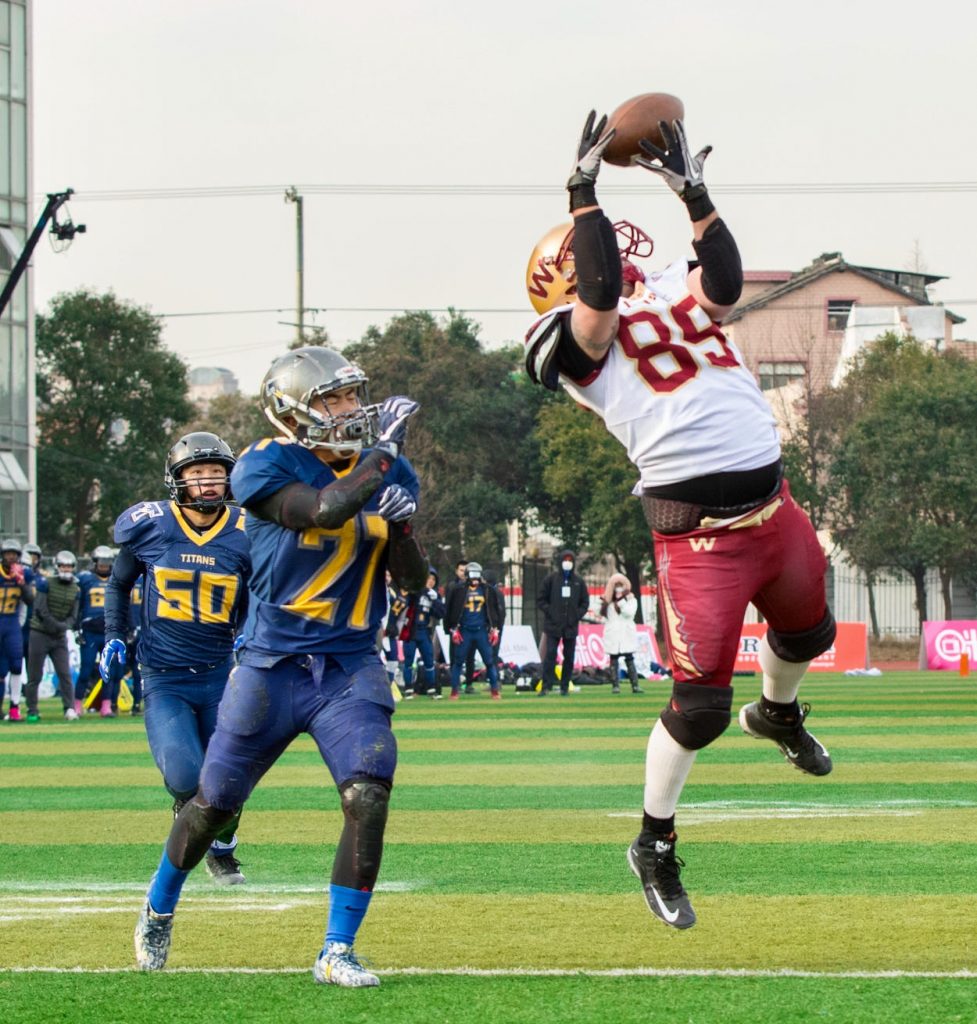 J.P. Neal goes up for a catch to set up a touchdown for the Shanghai Warriors in the January 2018 championship game.

Since he started playing, Neal said he saw the league go from “Pop Warner with 20-year-olds” to a league that features many former NCAA Division I and professional players.

Some of the players are brought in to work for companies. They are, in some respects, ringers.

Because of all he does, Neal was recently awarded the team’s 12th Man Award, for “contributions on and off the field.”

For Neal, an accomplished softball player in China, as well, that is no big deal. He is just giving back to the game and helping it grow.

The regular-season games do not get big crowds. For the most part, it is family and friends who are watching.

The championship games attract around 1,000 fans in person. As many as a million fans watch on the league’s live stream.

He laughs when he looks back at his final days playing high school football.

“When you’re a senior, they tell you ‘You’ll never put the pads on again,’” Neal said. “They say ‘You’ll never smell the sweat and the mud. You’ll never run the hill again.”

For the better part of two decades, Neal thought his coaches were telling the truth about the end of football. Now, he is thankful that they turned out to be wrong, and he sees no end in sight.

“I get to play football,” Neal said. “I will stop playing when I no longer contribute to the team. If I can keep contributing and helping my team win, I’ll never stop.”