When an injury sidelined Butte High senior Josh Neil for the season three weeks ago, the Bulldog football team lost a force on both sides of the ball.

Little did they know, the Bulldogs also gained an advantage in other ways.

“His leadership is the biggest thing that we miss, but it’s still there,” Butte High coach Arie Grey said of Neil. “Does that make sense?”

Grey was talking about a new kind of leadership. A leadership that comes off the field. It is a leadership that Grey said has been a factor for the surging Bulldogs, who will likely punch a ticket to the playoff if they win at Missoula Big Sky on Friday.

“He’s embraced that different kind of leadership, and it’s neat to see,” Grey said. “Josh really has stepped in and taken on that leadership role by being a positive influence on the sideline, caring about the kids, being involved. Our kids get to see him working out every day. They get to see what he’s done.

The 5-foot-9, 155-pound Neil injured his left leg while practicing kick returns on Wednesday, Oct. 3. He thought it was going to be a minor injury. That injury quickly turned into a major ordeal.

“I tore something in my calf, then it was Compartment Syndrome,” Neil said.

Compartment Syndrome occurs when excessive pressure builds up inside an enclosed muscle space. The pressure impedes the flow of blood to and from the effected tissues.

As in Neil’s case, it can be an emergency requiring surgery.

“It fills up with blood, and you have to get it cut open,” Neil explained.

After spending several hours agonizing in the hospital, Neil underwent surgery to save his leg in the wee hours of Thursday morning at St. James Healthcare.

“The pressure was building in my leg,” Neil said. “If they wouldn’t have got it in time, I could have lost my leg. I don’t think it was that close. If I would have got up the next morning and then came, then maybe.” 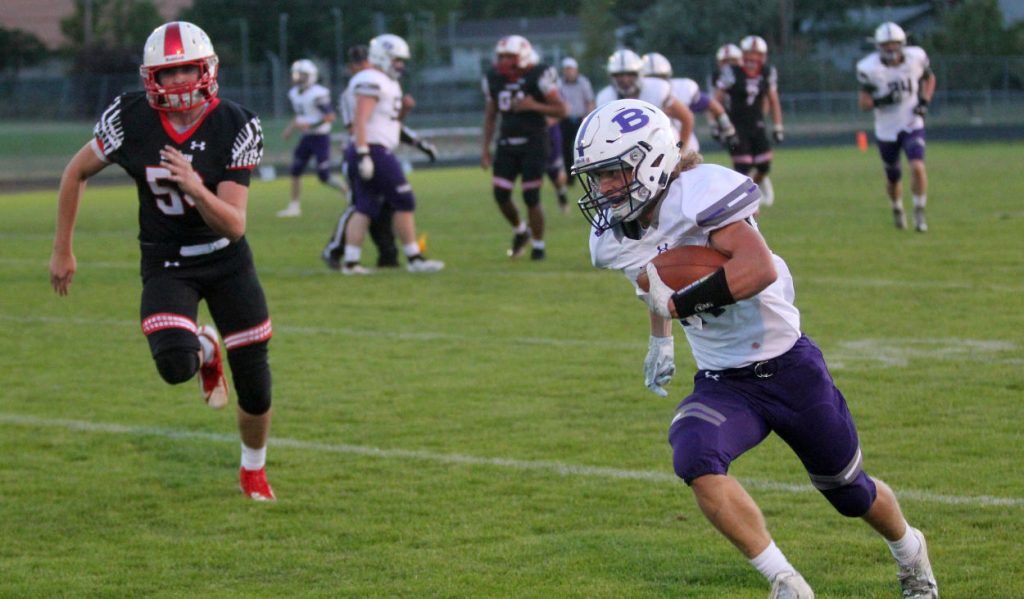 Bulldog Josh Neil races 47 yards for a touchdown that was wiped away by a penalty Sept. 14 in Bozeman. (Butte Sports file photo)

Grey was with Neil in the hospital the night after his seemingly minor injury became very serious.

“It was hard for me,” Grey said. “The guy is tough. He is tough as nails, and he was hurting. You felt bad for him. You were like, ‘Can we do something to help this poor guy because he’s in so much pain.’”

The surgery was a success, but Neil couldn’t be with his team Oct. 5 when they traveled to Billings to take on the Senior Broncs. He wasn’t released from the hospital until late that Saturday.

Neil, who finally ditched the crutches this week, though, has been with the team ever since. That includes home wins over Great Falls High and Billings Skyview that put the Bulldogs back in the driver’s seat for a playoff berth.

For Neil, the injury couldn’t have come at a worse time for several reasons. He had just ran for 104 yards in a loss at Billings West, the second-place team in the Class AA.

That was the same rushing total he put up two weeks earlier in a loss at first-place Bozeman.

Neil had racked up 299 yards on 42 carries. He also caught 13 passes out of the back field. It would have been 14 if he didn’t have a long touchdown reception called back by penalty in Bozeman, where he also busted an 80-yard touchdown run.

Neil was starting to hit his stride at the same time the Bulldog offensive line was really starting to gel.

Last Friday, Neil stood with the help of crutches as he watched the Bulldogs roll to a 56-13 win over Skyview. Classmates Kash Kelly and Kale McCarthy each scored a pair of touchdowns. Senior Carl Anderson scored the first of his career.

Neil said that was a bittersweet night.

“It was, definitely, but it was still cool to see them get a couple,” he said of his classmates’ touchdowns. “I know Kash has been looking for some, so that was cool. Definitely, these last couple of weeks have been kind of tough.”

This season was one that Neil had been looking forward to for so very long. Since the end of last season, he read a daily reminder at his school locker to help inspire him.

“I wrote a note in the back of my locker,” Neil said.  “Last year I got all honorable mention all-conference. This year I wanted All-State. I made a note. Every day after school my friends would leave, but I’d make sure to look at that. Then I would go down there.”

Down there was the weight room. Grey calls Neil a weight room “freak.” Other coaches at Butte High noticed, too.

“Every day when I went to practice this past year, he was working in the weight room,” said Butte High boys’ basketball coach Luke Powers, who coached Neil when he was out for the team as a freshman and sophomore. “Seriously, every day. He’s a great kid, great student, great athlete.”

After two years of playing basketball for the Bulldogs, and Powers said he definitely would have been a junior varsity player for Butte High last season, Neil decided focusing on other things.

“I do,” he said when asked if he liked basketball. “But I just wanted to get in the weight room more.”

Neil has had to work harder than others his entire life. He had to make up for the fact that he cannot see out of his left eye. He can’t see shapes or colors. Nothing.

That came because he had a tumor removed when he was 3. He went through several surgeries and will undergo one more to straighten the bad eye.

“I’ve just gotten used to it over time,” Neil said before demonstrating by turning his head like he was looking over his shoulder for an incoming pass. “I kind have look back a little farther left or right.”

“That’s why I quit baseball,” Neil said, laughing at how tough it was to hit a pitch.

Imagine how tough it must be. Try to judge and catch or hit a ball with only the use of one eye.

“I try to do it every once in a while, and it hits me in the head,” Grey said, holding his left eye closed for effect. “He tracks the ball better than a lot of guys. He has phenomenal hands.

“He’s dealt with it his whole life,” Grey said. “What a tough kid. It’s a pretty special thing when he got to trot out there on the field because he had to work his butt off to get there.”

Even more impressive, Grey said, is that Neil never uses his vision as a crutch.

That’s why Grey will never bet against Neil’s and his goal of playing college football. Neil, a member of the National Honor Society, said he has talked with Montana Tech and Carroll College and “kind of” the University of Montana.

He said he’d like to play offense at the next level, even though he has excelled at cornerback.

Grey said that Neil would fit nicely in a college program as a slot receiver because he runs nice routs and has the kind of speed to “take the top off the coverage.”

“He brings quite a bit to the table,” Grey said “He’s a good student. He’s a good person. He’s great in the weight room. Then you go to the field stuff, and he’s explosive. He’s got a high football IQ. He plays the game the way it is supposed to be played, hard.” 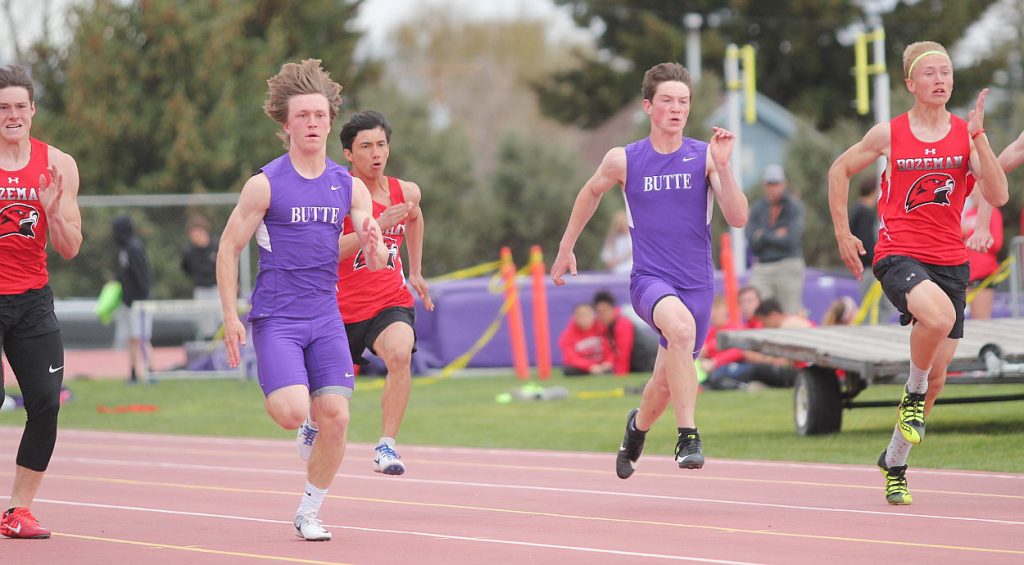 Butte High’s Josh Neil, left, and Tommy Mellott run the 100-meter dash among a trio of Bozeman Hawks during a May 10 meet on the Charlie Merrifield Track. (Butte Sports file photo)

Neil is the same way on the track, where he ran a leg on both Butte High relay teams at the Class AA State meet in Great Falls in May. He ran the opening leg of the 400-relay and the anchor of the 1,600.

“That was crazy,” Neil said. “I did not expect that, but it was cool when it happened.”

It was no coincidence that Neil ran the final leg of that relay. Grey said his competitive nature made him an easy choice for the spot.

Grey said Neil looked puzzled when he told him he would take the baton fourth.

“I was like, well, ‘You’re the most competitive guy we have, and I know that you will do everything in your power to get that baton across the finish line,’ Grey said. “There’s so many things about him that I love him to death and are so amazing to me. The thing that he does is he leaves the field exhausted every time. Whatever sport he is in, he leaves it out there. That is rare. That is a special thing to see. He is the ultimate competitor.”

Neil, who also competed at state in the 100-meter dash and the long jump, is already looking forward to the track season.

He said he is planning on improving his personal-best time of 11.3 seconds in the 100 to under 11 seconds.

Until then, Neil be there for his teammates in another way, a way that just might be more impressive than scoring a bunch of touchdowns.

“Josh is an ultimate program guy,” Grey said. “His leadership in the leadership council, as a captain, in the weight room and all the off-the-field stuff is truly amazing. What I’m truly proud of him is it hasn’t missed a beat since he’s been out.

“I’m excited about him and his future because he’s going to be phenomenal whatever he does.”