Jeni Hope said she is heartbroken.

After two successful seasons leading the Butte High volleyball program, Hope resigned her position Tuesday. It was a move she said that was forced because of disagreements with school administration.

“It saddens me to say I had to resign this position,” Hope said in a statement. “In my opinion I was prevented to continue my philosophy, coaching ideas, design and coaching plans in keeping and advancing a winning volleyball program by administration. I feel there are too many obstacles and restrictions to continue.”

The move comes after Hope guided the Bulldogs to their first trip to the Class AA State tournament in 13 seasons last November. Butte High finished the season at 13-11 despite losing 6-foot-2 senior Kira Mortensen, who will play volleyball for NCAA Division III power California Lutheran, for all but a few games because of injury.

Hope said she told her players about the decision during an emotional meeting Wednesday night.

“I was just honest with them and told them. That was the hardest part,” she said. “That was tough telling the seniors.” 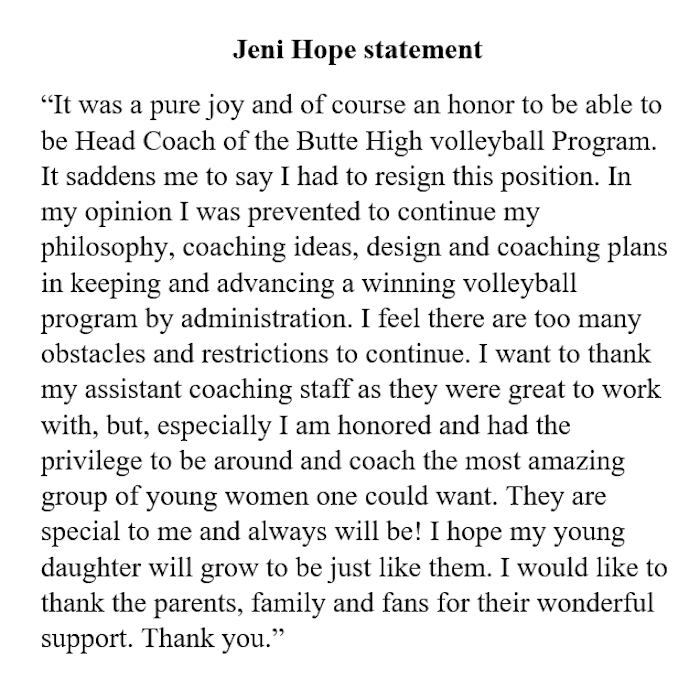 “I appreciate everything she did,” Merrifield said of Hope. “She spent a lot of time and put a lot effort into it.”

Merrifield said he cannot comment further on Hope or the disagreements she mentioned. He said other coaches will run open gyms so the Bulldog players don’t miss court time.

The AD said he hopes to have the job opening posted by early next week.

“We’re going to put it on the front burner,” Merrifield said. “We’d like to get it hired as fast as possible. Hopefully we get some great applicants and find a great coach for the kids.”

Hope, who was a standout out player at Butte High and Montana Western, teaches five different courses at Butte High, where she has taught four five years since moving back to town from Texas. That includes advising the students who put together the Butte High yearbook.

“I did everything I could, I really did,” Hope said. “It is just so confusing. I thought I was doing the right thing. I was excited about the future.

“I absolutely made mistakes,” Hope said. “I could have managed my time better and communicated with (administrators) better.”

She said she plans to stay involved in volleyball by taking a larger role in the club volleyball program. Hope also said she will continue to be a Bulldog backer.

Now that she is not going to be the head coach of the high school team, Hope can devote even more attention to her 6-year-old daughter Lyvia.

“On the bright side, I have more time with my daughter,” Hope said. “I can travel.”

Hope said she cried for hours after her resignation. She said it will take some time to heal from the pain because she was so in love with her job and teams.

“I was excited for the season,” Hope said. “I had a good group coming in. I love those girls.”

Still, Hope said she feels turning in her resignation was her only possible move.

“It’s pretty simple,” she said. “You can’t have success and build a program when you’re met with resistance at every turn.” 2 comments