Historic night at MAC kicks off 2023 season with a bang

Brooke Badovinac drives to the bucket Thursday night in a scoring performance for the ages. (Photo Butte Sports John Robbins)

It was a historic night at the MAC Thursday night in the Mining City, in more ways than one. It’s official Butte, we already knew Brooke had scored more points than any male or female athlete in Butte Sports history coming into her senior campaign.

The Lady Maroons took no time to get going out of their long holiday break Thursday evening, so much so that Brooke Badovinac started the night at 989 career points and dropped 11 in the first quarter to capture that 1,000th point. 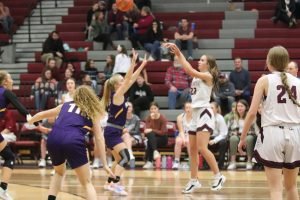 Brooke Badovinac shoots a jumper in the second half of Thursdays game. (Photo Butte Sports)

The Lady Maroons jumped out to a 16-6 start after 1 quarter and were led in large part early on by Maycee Anderson, Arika Stajcar, Mollie Drew, and Brooke Badovinac. Park picked up the defensive intensity in the 2nd quarter and pressured the ball to create havoc in the turnover department.

The Rangers knocked down some big threes to cut into the deficit, but every time they got within striking distance, Arika and Mollie would answer right back, as the quarter was winding down, Bado pulled up for a jumper at the left side elbow as smooth as butter and drained it as time expired and the Maroons led 30-22 at the half.

Quarter three was all about Butte Centrals Mollie Drew, her teammates fed her the rock and she delivered a steady treatment of punishment down low on the block. With just under 3 to go in the quarter Brooke dished it down low to Mollie on an inbound play, she sealed her defender and went up for the bucket, drew the foul and completed the and 1. 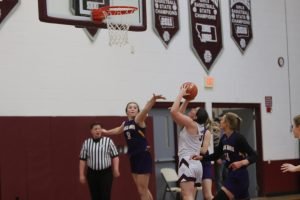 Mollie Drew converts an and 1 bucket down low in the second half Thursday night. (Photo Butte Sports)

The Lady Maroons would continue to rebound and control the glass and force turnovers to extend their lead to double digits going into the 4th leading 46-33 after 3.

As the 4th quarter began the Lady Maroons sought out their fearless leader Brooke Badovinac as running mate Mollie Drew dominated the paint tonight, but she fouled out late in the quarter and finished with 19 points.

Brooke does what she always does, as calm cool and collective as one can be on the hardwood, she iced the game with her offensive dominance and ability to knock down free throws.

Brooke finished with a Lady Maroon game high 38 points. This beats the record for most points in a Class A girls basketball game, the all time record of 42 is held by Kellie Johnson who scored 42 against Class B Whitehall. Brookes 38 tonight beats the previous record for Class A of 35 shared by Brooke and Julie Leary.

This also notched coach Quinn Carters first win as a varsity head coach, what a great night in Maroon land and no better way to kick off 2023 than with a win!

The leading Maroon was Brooke Badovinac with 38 points, Mollie Drew tossed in 19, Arika Stajcar had 6, and Maycee Anderson had 5 for the Maroons. Butte Central will travel to Frenchtown this Saturday, tipoff is at 4pm.